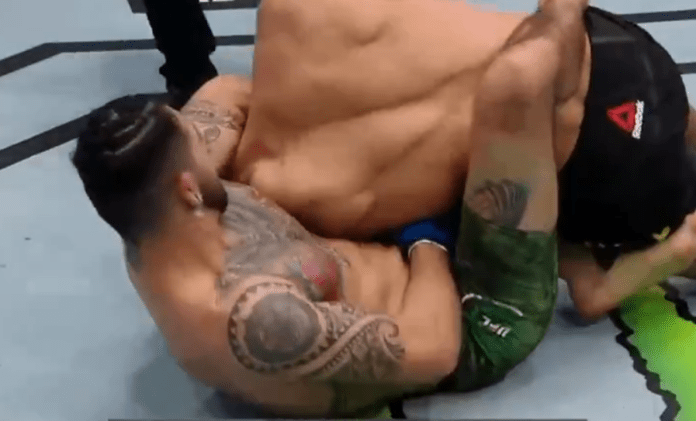 Anthony Hernandez (8-2, 1 NC), is responsible for the biggest surprise of the evening, and perhaps of the year. Especially when we look at the way and against who he recorded a victory. 27-year-old Hernandez submitted Rodolfo Vieira (7-1) in Las Vegas by a guillotine choke in the 2nd round at the UFC 258.

At the beginning of the first round, Vieira did a pretty good job. He immediately took Hernandez down and used his world grappling skills to control and dominate Hernandez on the ground. Vieira first mounted him and tried to apply an arm triangle. Hernandez got out of it into an armbar attempt from Vieira. Somehow, Hernandez managed to escape Vieira’s attacks, and they were back on the feet.

Before the bell sound, Rodolfo was so exhausted and opened up himself for some heavy shots. It was pretty clear he won’t be able to recuperate for the second round.

In round 2 it seemed like Hernandez is all over Vieira. Rodolfo’s takedown attempts were defended by Hernandez, and it was just a matter of time when Rodolfo will stop completely. 2 minutes into the second round and Rodolfo was completely exhausted. He literally stood in the turtle position when Hernandez pulled of a guillotine choke.

We can say that Hernandez pulled off an impossible as no one in the world could even imagine getting Rodolfo submitted according to the facts that he’s multiple BJJ world champion. But, his cardio gave up on him, and it plays a big role. It’s pretty unclear how Rodolfo was that exhausted after the first few minutes of the fight, and we’ll probably get some explanation from him soon.

Anyway, Hernandez is pretty well known for his grappling and submissions in his MMA career. He finished with a submission 6 out of 8 in his PRO MMA fights, but in this fight, he was a 30-1 underdog to submit Rodolfo.

TAPPED OUT THE BLACK BELT HUNTER! ?@ILoveBamf WITH ONE FOR THE AGES! #UFC258 pic.twitter.com/9b3V9yzRzI

TAPPED OUT THE BLACK BELT HUNTER! ?@ILoveBamf WITH ONE FOR THE AGES! #UFC258 pic.twitter.com/9b3V9yzRzI