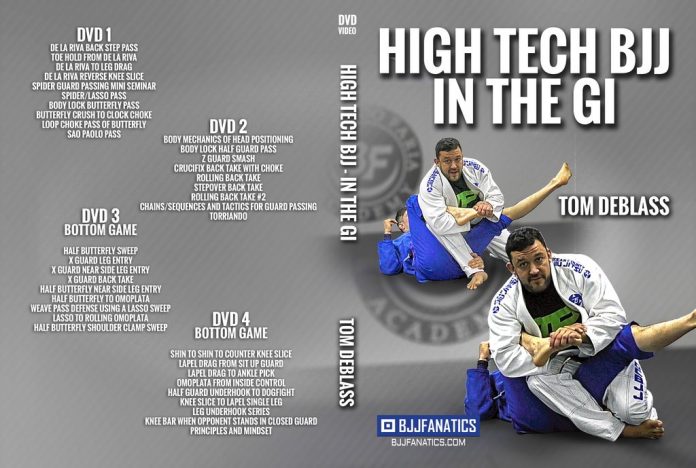 Ladies and gentlemen, he is back! Not only is he back but he is back with a GI! People’s favorite coach, Tom DeBlass certainly knows how to keep his fans happy. The New Jersey-based Brazilian Jiu-Jitsu black belt doesn’t sit still. He is enormously active on social media, runs a Jiu-Jitsu Academy and manages to corner and train the Ryan brothers and Gary Tonon at every opportunity. Yet, the 35-year old still manages to find the time to issue DVD instructionals on a regular basis. This time around, though, it is a whole different Tom DeBlass DVD. This time, it is a highly technical Gi instructional.

So far all Tom DeBlass DVD instructionals have been No-Gi ones. Seriously, even in his “Ripped In 12 Weeks” DVD, he doesn’t wear a Gi. Although many people might make him out to be a No-Gi guy, he most certainly is not. He is a highly accomplished Gi practitioner and instructor. Actually, he is the guy that gave both Gordon Ryan and Gary Tonnon their black belts in the Gi. He goes over to train with the Danaher Death Squad at Renzo Gracie’s academy on a regular basis.

Who wouldn’t want to train with Tom DeBlass? I mean, really, the guy is arguably the most famous Jiu-Jitsu coach in the world today, bar John Danaher. He is also a very active competitor in every competition format available. If you take into account his MMA background a well, you have as well rounded a coach as you can imagine. Well, learning in the flesh means that you need to be able to visit the Ocean County BJJ Academy. The next best thing is booking him for a seminar, but that’s unlikely as he is booked more than 2 years in advance. Thankfully, he is as active in releasing DVD instructionals as he is in all other areas of grappling.

On a couple of previous occasions, DeBlass issued digital releases on various subjects. His trademark position is the half guard, so it is not surprising that he recorded a release on that. The Half Domination Tom DeBlass DVD is probably the most complete No-Gi half guard instructional you can get. Across 4 volumes Tom shares his comprehensive expertise on the position, sparing no details on groundbreaking techniques.

Staying the No-Gi course, DeBlass’ next release was a submission-related one. However, it’s not a submission hunting DVD, but rather an escape blueprint. DeBlass has not been submitted in the last decade, if not longer. Now, he brings all his Submission Escapes in a well organized digital release.

If you’re looking to complete a Tom DeBlass DVD collection, the only missing piece is his intermittent fasting release. In it, you get a complete guide on healthy eating, weight cutting and strength and conditioning for grappling martial arts. A DVD well worth your while.

Now, the collection has grown by one more release. DeBlass just released the latest title and surprised most of us by showing up in a Gi in front of the camera. What you can expect is a high level of Jiu-Jitsu presented in Tom’s unique style. His larger than life personality is as apparent as always, finely complementing his immense technical knowledge. Once again, it is 4 DVD volumes lasting in excess of 1 hour per DVD.

It all starts with passing the guard. If you’ve ever trained Brazilian Jiu-Jitsu in the Gi, you know how hard it could be to pass the guard. There are countless guard variations that employ the Gi to great effect. Tom DeBlass addresses all of the situations in which you might find yourself when passing a Gi based guard player.

First on the plate is a concept for passing the De La Riva Guard. For the impatient submission hunters there’s a really tight toe hold available that’s going to become your go-to move instantly. Moreover, there are great never-before-seen passing variations for one of the most annoying Gi guards in Jiu-Jitsu – the spider guard. It is actually a mini-seminar on spider guard passing. Oh, and he also demonstrates the Sao Paolo pass. If you have no idea what it is, it is only the best-closed guard passing system available.

In the second volume, passing continues, addressing the butterfly guard. This dynamic guard variation can be a true nuisance in Gi Jiu-Jitsu due to grips on the lapels. DeBlass offers options to pass the bodylock, z-guard, and half guard as well.

Once done with passing, it is all about how to get the back. Marcelo Garcia’s signature crucifix is one of the first subjects Tom addresses in this DVD. He then moves on to the mechanics of rolling back takes. After demonstrating how to become a human backpack, he doubles back to passing. This time though, instead of techniques he offers a complete chain of passing along with appropriate tactics for certain situations. This, for me, was the true masterpiece of this volume.

The last two volumes are dedicated to playing the bottom Brazilian Jiu-Jitsu game. Of course, Tom’s signature half guard is the starting point. he is as well versed in this position in the Gi as he is without it. The sweeps he uses to open the bottom game chapter are effective, easy and unexpected.

Going forward, Tom transitions into X guard territory. This remains the subject of the disc for a while, with a few easily connectable techniques presented by DeBlass. After the X guard, it’s all about my personal favorite half guard variation – the butterfly half. I must admit, I found a few brand new things to do from this hybrid guard position. Some Gi specific work rounds off the volume, mainly regarding the lasso guard.

The final DVD in this set is a counter-attacking one, again, from the bottom. Some shin-on-shin guard fundamentals kick the volume off. Then, it is all about lapel drags to plant your opponent flat on the ground. I also loved the kneebar setup against a standing closed guard pass.

The real cherry on the cake is the end itself. Tom goes into a long-winded elaboration of his principles of grappling. He also shares his competition mindset, outlining the most important concepts. DeBlass is regarded as one of the JIu-JItsu people with a deeply philosophical approach, so every advice he shares is worth his weight in gold. Get the DVD to complete your collection and become a Jiu-JItsu beast like DeBlass himself!