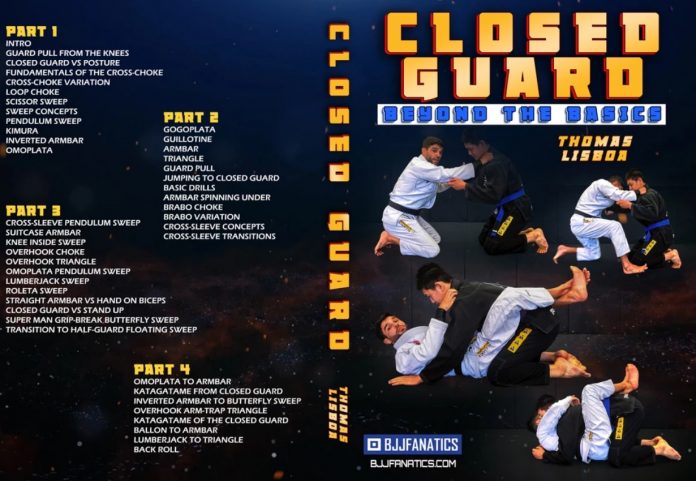 What happened to the closed guard in Jiu-Jitsu? I remember way back when I did y first tournament. I got o the closed guard in every match, and managed to get a few victories thanks to it. However, from there on, the closed guard seems to have taken a back seat. Just like it did for me, the closed guard fell out of favor with most others. The reason was all the crazy open guards that still, to this day, keep on coming. However, I’m glad that there’s a kind of a revival now of old-school BJJ fundamentals. And the closed guard is making a comeback with a bang. Thre are plenty of instructionals nowadays that take al ook at the basics of the BJJ closed guar. But what comes next? Well, Thomas Lisboa has an idea, one that he shares in his  “Closed Guard Beyond Basics” DVD.

Just a few months ago, I revisited the closed guard since I had to teach it as part of a class. However, I had to teach it to the advanced group, which meant I needed to refresh my knowledge in some of the more intricate aspects of it. This refresher course spiked my interest in the position, years after I was swearing by it on a daily basis. As it seems, people have been putting out crazy closed guard information. However, if you’re really looking at some of the more advanced options, then there’s only one title you need to be considering. “Closed Guard Beyond Basics” is not just another closed guard instructional. Tomas Lisboa has some crazy ways of moving past the fundamentals, so much so, that you’\ll fall in love with them at first glance!

Thomas Lisboa – The Featherweight King Of The Guard

Gi or No-Gi, you’re going to use the closed guard. When it comes to Gi Jiu-Jitsu, though, you definitely have way more options. All those lapel and sleeve grip combinations make for a hell of an attacking game if you can put one together. Once again, I’ll refer to an example I’ve used countless times – look at Roger Gracie. Nothing but the basics, lots of closed guard work, and a bunch of World Champion titles to show for it. Clearly, the closed guard, among other basics, works at the highest level. But what comes after the basics? Thomas Lisboa has the answer, although it is probably not what you think.

Lisboa is a  Brazilian, that was born in Sao Paolo in 1988. Form Karate and Capoeira, through Judo, he “graduated” to Jiu-Jitsu in his native Sao Paolo. He started at a local Alliance affiliate training with  Alex Monsalve and Daniel “Cabelo” Nogueira. They all traveled regularly to learn from Fabio Gurgel, who ended up awarding Thomas all fo his belts. In fact, after winning medals at the Mundials for years in a row, Gurgel promoted Lisboa to a black belt in 2012. Since then Thomas spent time with Marcelo Garcia, Michael Langhi and a bunch of other impressive grapplers. Suffice to say, it shows in his pedigree.

So far, Thomas has won numerous Rio, Florida, Belo-Horizonte and other championships. He also came in second at the No-Gi Worlds, as well as third at the Europeans and Pans. The energetic featherweight is extremely well known for his guard prowess, both from the open and closed variations. Now, in the “Closed Guard Beyond Basics” DVD set, Thomas Lisboa shares some secrets that have gotten him through one of the toughest divisions in the world on multiple occasions!

First of all, let’s manage expectations a little bit. When you read “Closed Guard Beyond Basics” you probably think you’re going to see never before seen flying, spinning and whatnot techniques from the closed guard. Well, you’re not.  Remember when I said that this DVD has stuff that actually works at a world championship level? When Thomas Lisboa says he goes beyond the basics, that means you get to learn those black belt secret moves that make or break the position. IN this case, think of it as fundamentals on steroids. This DVD is going to teach you how to do everything, the right way. More importantly, it’ll teach you how to be extremely efficient. Not to mention the number of unexpected attacks you’ll discover inside.

The instructional consists of four total volumes. The very first one cover guard pulling and some great sweeps and submissions. Basic stuff here, only taken a step further when it comes to the finer points. Part two stars some nasty stuff the likes of Gogoplatas and Brabo choke. Certainly upping the ante here. Part three goes into the secrets of highly advanced grip fighting, opening up craziness like the lumberjack sweeps and a bunch of open guard transitions. Finally, volume four covers submissions with a level of proficiency that’s you’ll have to see to believe. All in all, this is really an instructional that goes beyond the basics. However, the reason it is worth having is that it doesn’t wander into uncharted territory.

The essentials are of course up first. Thomas Lisboa kicks things off with a few guard-pulling tips and tricks. Competitors, make sure you really digest this, as it’ll solve many tournament riddles for you. Apart from that, this is the fundamentals portion of the instructional. The chapters here include sweeps and submissions from the closed guard. And, while you think you know most of them, you definitely need to take a look at what Lisboa has to offer.

First up, forget about Roger Gracie’s cross choke. “Closed Guard Beyond Basics” offers not just one, but several variation n this brutal choke. Moreover, it is followed by an even nastier loop choke, making sure you get a tap. Or, more often, a nap. The scissor and pendulum sweep follow suite, dissected down to the bone. And, as if that wasn’t enough, you get armbars, kimuras and Omoplatas to round this volume off. Essentially, so far, you get a full instructional’s worth in just the first volume.

Volume two should be even more impressive than the first one, right? Thomas Lisboa certainly thought so, as he starts things off with a Gogoplata, of all things. While you might consider this to be a low-percentage move, you need to stop and see this take on it. It is guaranteed to have people tapping in no time! And, while on the subject of submissions, Lisboa also covers guillotine, armbar and triangle options, just to make sure you have options. In fact, they all work as a closed system, covering just about every possible escape route.

Ther’s also a hugely important part of the closed guard game here. In fact, it may be the most important one. If you do not truly understand how to jump guard, you might end up injuring both yourself and your opponent. Lisboa not only dissects the guard jump but offers safe drills to make sure you practice live. And, this is all before “Closed Guard Beyond Basics” moves on to even more submissions. Featuring here ist he closed guard Gi Brabo system, a true title winner. Included in this section you’ll find a complete system, along with concepts and grip fighting details.

Wait, there’s more! A lot more, in fact. Part three of this Thomas Lisboa instructional goes even deeper into the closed guard. Here, the focus is on some really high-level stuff. Yeah, the techniques might be fundamental, but the setups and execution is world-class level! A few sweep variations, like the knee inside and cross sleeve pendulum, are up first. The latter is a personal favorite of mine. However, that’s not the most impressive part of this volume.

There’s a section in it that covers a rarely-ventured area of the guard – the overhook closed guard. Submission options follow, as well as some more unorthodox sweeps, like the Roleta and Lumberjack sweep. The one chapter that’ll really come in handy to everyone is how to deal with the standing opening without leaving the closed guard. Oh, and the biceps armbar is also one to look out for!

As the “Closed Guard Beyond Basics” DVD draws to a close, the focus is on submissions. Tp simplifies things, this is where you work out the kinks on all closed guard submissions. Learn the stuff Thomas LIsbnoa offers here, and you’ll have a black belt killer closed guard, guaranteed. Examples include Omoplata to armbar transitions, as well as some inverted armbar craziness. It’ll take me several more tries to get the hang of some of this stuff. Moreover, there are even more sweeps, some new, like the Baloon sweep, and some we’ already saw, like the Lumberjack.

Thomas Lisboa is a likable and easy to listen to BJJ black belt. Plus he has tons of competition experience. The subject he is working on is one very popular at the moment., the fact that his “Closed Guard Beyond Basics” DVD instructional stands out from the crowd of full guard DVDs that are everywhere, speaks volumes of its quality. If you’re a white belt, you’ll find this useful. If you are. However, purple belts and beyond, don’t even think about competing without watching this instructional!