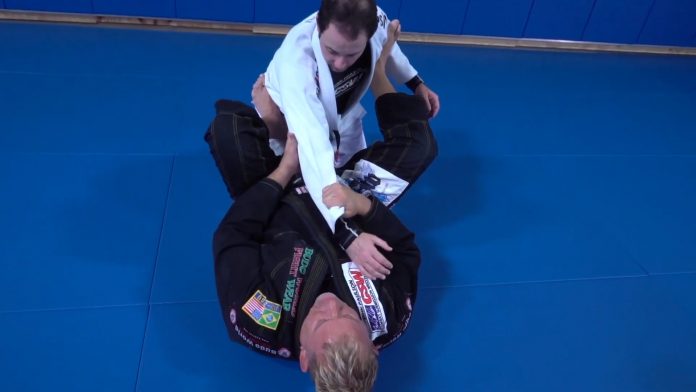 The more complicated BJJ guards get, the more efficient simpler versions of guards become. This is somewhat of a paradox, but it is true nonetheless. When it comes to closed guards, the basic closed guard and half guard have remained staples of BJJ throughout the years. The BJJ open guard, on the other hand, keeps evolving on an almost daily basis. Today, there are more open guard variations than one can count, some of them simple and others as complicated as rocket science. It is a fact that they work, but only for certain people. Simpler open guard variations, like the stretch guard, though, are universal and everyone can do them, regardless of experience, age or size.

The stretch guard is not a guard you’ve heard of. And yet, everyone has played a variation of it the moment you’ve opened your guard. The stretch gaud is not a complicated guard at all, and we use it very often, even without realizing it. In fact, you might argue that he stretch guard is the most basic BJJ open guard out there. Still, as with all things grappling, the moment you become aware of something, the better you’ll be at executing it. So, today, we’ll be looking at what the stretch guard is, how it works and what kind of attacks you can set up from there.

If you ask me, the less you complicate things in JIu-Jitsu, the better your BJJ is going to be. BJJ Open guard variations are a great example of this. It is not that stuff like reverse De La Worm guard doesn’t work. It does, as Keenan and others prove over and over again. However, if you do not have the body type or experience Keenan does, for example, your worm guard is never going to be nearly as good as his. Probably not even if you’re an exact Keenan look alike.

The reason is that most open guard systems in BJJ are overly complicated. Granted, they can be hard to get out of, and can confuse opponents, but require a lot of time to master, and can often times end up with you in a bad position rather than the opponent. So, whether it is any BJJ open guard, or a pass, or anything else for that matter, simplicity is key.

The reason why the stretch guard is a more effective open guard than, for example, the worm guard, is in the fact that it is easy. It is easy to get to, easy to hold, easy to get good at fast, offers lots of attacks, and anyone can do it. One thing that might be a drawback is that it is predominantly a Gi guard, although there ara NO-Gi variations possible. But, when you come to think of it, all the lapel based open guards are exclusive to Gi Jiu-Jitsu anyway,

That said another reason the stretch guard works is that it is based on fundamental BJJ principles Control the hips, control the shoulder girdle, break the posture, take away balance. Achieve those and you’ll be able to sweep or submit anyone from the bottom, regardless of how you are positioned. This easy open guard variation offers you the perfect structure to achieve all of the above with ease. That’s why it is effective against all levels of opposition.

How The Stretch Guard Works Guard

The stretch guard is probably the easiest BJJ open guard you’ll ever play. It works best when done against kneeling opponents, particularly as you begin learning it. Once you pick up the basics, you can easily use it against standing, or half-kneeling opponents as well.
Position wise, there’s no real philosophy about leg placement. One leg goes on the hip, while the other goes on the opponent’s shoulder or biceps. The key to playing the guard is what you’re actually doing with your legs. That’s where grips come into play.

Grips make or break the guard, as is the case with any BJJ open guard. In the stretch guard, you want a very simple combination of grips – one on the collar, one on the sleeve. However, they have to very specific grips in order to help you set up the guard perfectly. Namely, the grip on the sleeve has to be a cross grip. The one on the collar can go on both sides, although same a side collar grip is the most used one. You could also use a two-on-one grip, placing your free arm on the triceps of the arm you’re already controlling with a cross grip.

The moment the guard actually starts working is when you use both your grips and leg placement to stretch your opponent out. You want to push out with your legs, most importantly, the one on the hip. If you can extend it completely, that would be ideal. At the same time, both your grips, but most importantly, the cross sleeve one, pull towards you. This will fold your opponent, braking both their posture and base with minimal effort.

As you will undoubtedly notice yourself, the easiest thing to pull off from the basic stretch guard is the triangle. The reason why one of your feet iso n the shoulder is to make submission attacks very easy. The moment you stretch someone with the leg on the hip and the grips, their center of gravity gets pushed back .that places them in the perfect position for a triangle, You can actually do not have to do anything at all, apart from swing the leg that is on the shoulder over. From there on, proceed to any triangle variation that you like to do.

A great follow up to the triangle from this BJJ open guard is the armbar. While you can hunt for it as a first choice attack, it works even better when you follow u pa triangle with it. Often times, opponents will try to move to the side the moment they feel your leg on their shoulder going over for a triangle. There’s no triangle now because of the opponent’s super posture, but an armbar is right there. The more stretched the arm is, the tighter it will be. Since the leg is already on their neck, use it to off-balance your opponent and swing the other leg around. A word of caution here, the armbar comes on very quickly, so be careful when rolling.

Another classic move you can hit is the Omoplata. Once again, it works perfectly when the initial (and easiest) triangle setup fails. Once again the setup is reactionary, meaning you act based upon what the opponent is doing. When they try to go under your leg to evade the triangle, they actually set themselves straight up for an Omoplata.

Last but not least you can get the back. If/when the opponent pins the leg that should be on their shoulder down, simply pull them towards you and do a hip escape., That’ll land you in an arm drag-style back take.

The Most Important Thing When Playing Open Guard

One thing you might have noticed about all examples of this BJJ open guard is that the opponent is kneeling in all of them. When you transition from the closed guard to the stretch guard, this is what is going to happen if you do the transition right. The folding motion of the stretch guard prevents opponents from standing up. However, even if they do, you can still use the stretch guard. Everything applies as before, you gust need the right grips and feet placement.

Working the stretch guard against a standing opponent is harder and can be more challenging. When you start learning it, make sure you try it against a kneeling opponent. The leg placement when opponents stand up is with one on the hi, and the other actively switching in front and behind the knee on the opposite side. Once again, you can easily achieve posture breaks and off-balancing opponents as long as you have the grips set up.

Also, you can use the stretch guard to bring an opponent down to the knees simply by stretching them further or threatening a sweep. From there on, you can keep doing all the things we already covered before.

In all my experience in Brazilian Jiu-Jitsu, the notion that simple is best has proved to be right over and over again. Even when I was enjoying lots of success with complicated and flashy moves, they did not work against everyone. The simple your BJJ is, the more it will work against all types of grapplers. The stretch guard is the simplest BJJ open guard you can play, and yet, it offers much more than the modern complicated ones do. Give it a try and see for yourself.