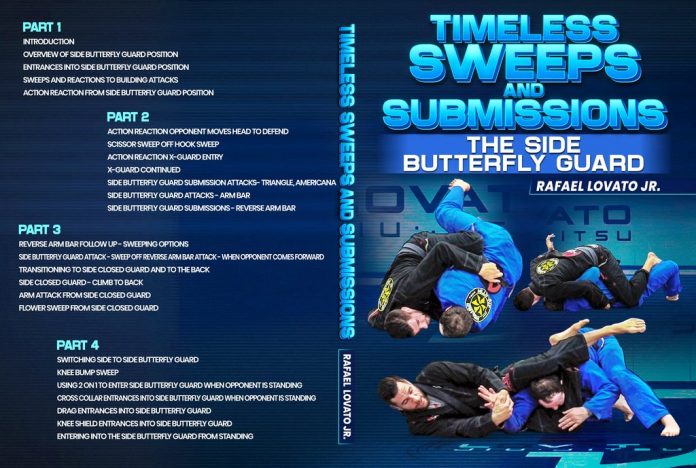 It is always fun when big BJJ names provide us with a different version of classic positions. The fact alone that they’re dabbling with it is more than enough to guarantee it is something worth exploring Moreover, you can get they’ve spent countless hours working on it before attempting it at the highest levels of grappling. Rafael Lovato is one of the people that like to mess around with guards a lot, be it from the bottom or passing. His latest experiment is the highly-attack ordinated Side Butterfly Guard, featuring “Timeless sweeps and submissions”.

ON SALE HERE:
Rafael Lovato – Timeless Sweeps And Submissions: The Side Butterfly Guard

As a big fan of both the butterfly guard and Rafael Lovato Jr., there was no way I wasn’t going to be interested in a BJJ DVD instructional called’ The Side Butterfly Guard: Timeless Sweeps And Submissions”.  Lovato usually delivers great content in his instructional DVDs, especially ones that revolve around guards.  After an unfortunate diagnosis, Rafael had to vacate his Bellator title and is now focused solely on Jiu-Jitsu again. While it was unfortunate to see him retire from MMA so soon,  it just means he will be able to provide us with a lot more awesome content like this DVD!

Why do we play guard in BJJ? Have you ever asked yourself that particular question? If you come to think about it, only three things are available to use from the guard, and just two of those are offensive ones. In terms of attacking, all we can do off of our backs are either sweeps or submissions. The third piece of the puzzle is guard retention, which is a purely defensive aspect of the guard game.

Given that submissions are the ultimate goal of any position, the approach I like to use from guard is to create dilemmas. Basically, when you play guard, for example, a butterfly guard, why only try and sweep, when you can try to submit at the same time? Holding on to a guillotine will either get you a tap or the way into the mount. Moreover, it makes guard retention much easier. The bottom line is that blending all aspects of guard together will provide you with a very diverse and efficient bottom game.

The Side Butterfly Guard: Timeless Sweeps And Submissions  Rafael Lovato DVD is the perfect resource to widen your scope, mostly in terms of positioning to achieve sweeps and/or submissions, rather than discovering new moves.

Rafael Lovato is not just an MMA veteran and Bellator champion but also holds historical records in Brazilian Jiu-Jitsu. He was the first non-Brazilian to win the Brazilian Nationals, a notoriously tough tournament at any level, let alone a black belt.  He then went about to make history again, by winning the absolute division a few years later, once again as the first non-Brazilian to achieve such a feat. Lovato also has Gi and No-Gi  World titles, as well as world masters titles along with a couple of Pans and one European gold. In short, he has won every major tournament there is.

Rafael Lovato has a very dynamic bottom game, that revolves around different open guards, but most notably, the butterfly guard. The guard is extremely powerful to sweep and submit, but people are starting to get a hang of it. Enter Lovato’s side butterfly guard, and now the whole game changes to the bottom person’s advantage once again. The new angle he created is the secret behind his success from the bottom at the highest levels of the sport.

The Side Butterfly Guard: Timeless Sweeps And Submissions  Rafael Lovato DVD is a four-volume BJJ instructional. As such, it features a well-known model and does provide us with the full system, developed by Lovato.  The instructions in the instructional are step-by-step, very precise, and detailed, and follow a clear progression. Through the four-volume, Lovato goes through the side butterfly guard position, plenty of sweeping and transitioning options, as well as some crazy submissions. The wrap up blends together the submissions and sweeps, giving the whole system a lot of sense, and helping you connect all the dots.

The side butterfly guard is not easy to understand as it is just the “regular” butterfly but played at a different angle to what most people are used to. Lovato explains all the ins and outs of the guard, from grips to hooks and body positioning to get you to feel comfortable in it. Entrances to the guard follow, mostly via transitions from other “neighboring” guard positions.

The introductory part also features some attacks, as although Rafael Lovato really carefully opens that door. He starts off with sweeps and submissions, but not done directly as an offense, but rather based on what the top person is doing. As the top person builds their attacks, you get to react and build yours, which is a great way of luring them into your sweep-submission traps. Add to that the confusion factor from the new angle of the butterfly guard and you have a  winning combination!

The sweeping portion features sweeps you already know, as well as several guards you’ve seen Rafael Lovato do on a regular basis. The hook sweeps are, of course, the basis of all sweeps in this instructional, given that you’re working from a butterfly guard variation. However, Lovato extends the arsenal to include scissor sweeps, tripod sweeps, etc., while also opening up cool X guard transitions.

Once again, there are both proactive and reactive setups to the sweeps, allowing you to either lead the exchanges or adapt to the rhythm of the opponent. The first introduction to side butterfly guard submissions is also in this volume, with a triangle choke and a few armbars paving the way for even more submissions. 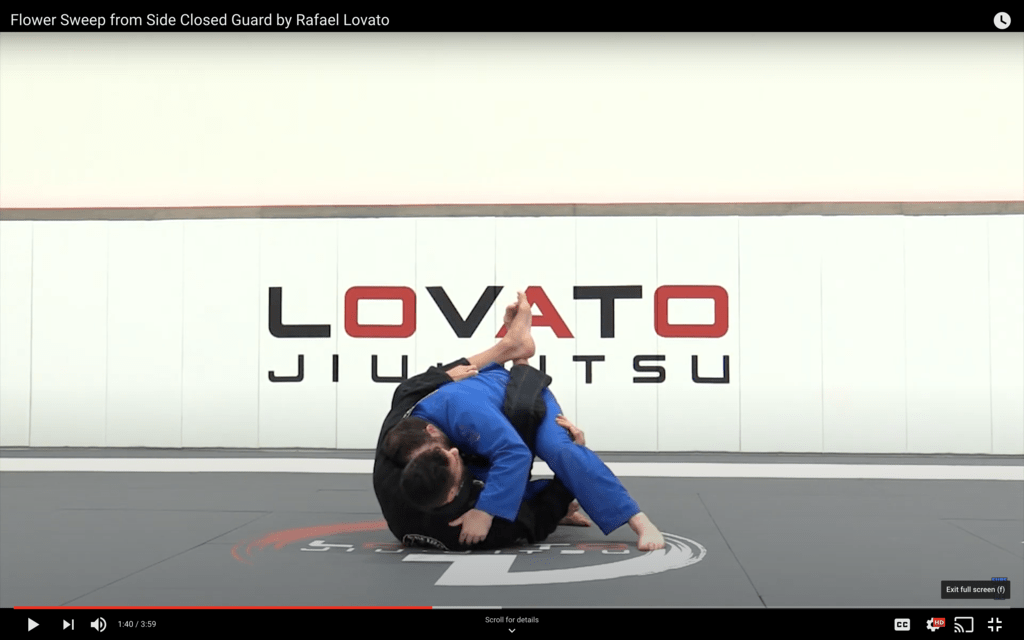 The reverse armbar plays a huge part in the Side Butterfly Guard Rafael Lovato DVD, which is understandable given the options it provides. Think of it as the crunch butterfly sweep, just with an angle that can get you an armlock as well. A dilemma attack, as previously discussed, and a very efficient one at that.

A great feature of this volume is that it also unveils the side closed guard, which is readily available from the same butterfly guard variation. Moreover, going to the side closed guard opens up back attacks, and even more sweeping options like the flower sweep, or, more submissions, once again, in the form of arm locks.

The final volume of the DVD really does put all the pieces of the puzzle together. Here, Lovato goes over everything, For a start, Lovato goes over ways in which you can switch the sides of the side butterfly guard, which is crucial to playing a well-rounded bottom game.

Entries with different grips go over ways to deal with standing opponents, as well as options that start in other guards ranging from the knee shield to standing entries. From each and every entry, combinations of sweep and submissions follow, allowing you to use everything Lovato demonstrated in previous volumes of the instructional.

Rafel Lovato is one of the best in the game, but also one of the professors that is always a joy to watch. He has a knack for teaching, and once again, demonstrates that in his latest Side Butterfly Guard: Timeless Sweeps And Submissions  DVD. The position is unique, and it is not something that’s just touched upon, but rather a complete system with combinations, entries, transitions, and fallbacks which will transform the way you play butterfly guard.

ON SALE HERE:
Rafael Lovato – Timeless Sweeps And Submissions: The Side Butterfly Guard