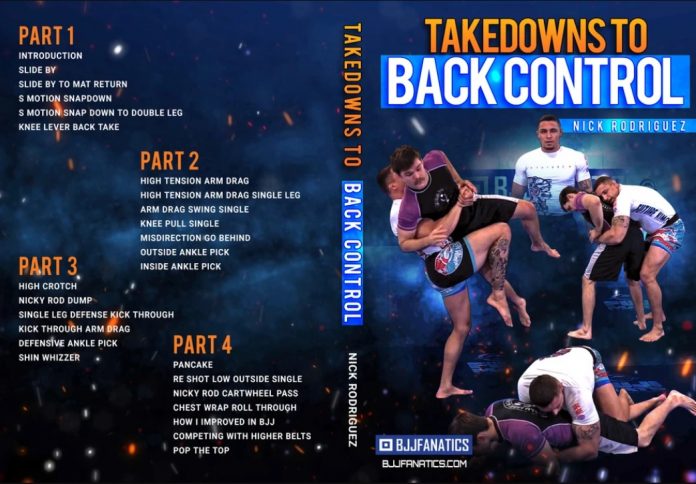 There’s, not one grappler alive that doesn’t know the name, Nick Rodriguez. It wasn’t the same a year ago. In fact, a couple of years ago, Nicky wasn’t even training BJJ. Now, he is n ADCC silver medalist in the heavyweight division. As a blue belt! Yeah, that’s when everyone took notice of the grappling machine that is being developed in the blue basement. Now, Nick takes things to the next level – he has his very first DVD instructional out. Named “takedowns to Back Control” it outlines his ADCC strategy that proved to be more than effective against the world’s toughest, and heaviest black belts. This Nick Rodriguez DVD is one instructional by a purple belt that I’ll be paying extremely close attention to.

ON SALE HERE:
Nicky Rodriguez – Takedowns To Back Control

If you told me to buy a Nick Rodriguez DVD a year ago, my reaction would’ve been “who”? Not that I wouldn’t come to it at a certain point, but I’d never go for it as a first choice. Fast forward to now and I was actually anxious about this release. Of course, I know that I’ll never possess Nick’s athleticism or his wrestling background. But whenever someone breaks things down as good as Rodriguez does in the “Takedowns To Back Control” instructional, there’s a lot to learn. Whether you decide to follow his system or simply learn details to fix your own holes, this DVD provides a lot more than just a few techniques stringed together. I expect nothing less form a grappler of his caliber anyway.

Nick Rodriguez literally burst on the grappling scene out of nowhere. Whenever Danaher and Gordon Ryan say they have surprises in the blue basement, I tend to believe. This time around, everyone was fooled, as Nicky Rod emerged. He is by all means extremely technical but he is also huge, ultra-strong and poses crazy athletic abilities.

At first, Rodrigez wen to the ADCC trials, at the West coast managing to get bronze. For a white belt, this is unexpected, although not an unseen accomplishment. What most people didn’t realize was that he only had barely 6 months of training experience under his belt at the time. However, at the East Coast Trials, just a few months later, he actually went through everyone like a hot knife through butte, winning gold with ease. And, he spent no more than 2-3 days at Renzo’s and two days wrestling in New Jersey prior to that. He included training at tom DeBlass’ Ocean County and two more days at South Jersey BJJ to really get in competition shape for the ADCC main event. And, he didn’t just have a dream debut, but he almost won the heavyweight division, reaching the final and losing only to Kaynan Duarte.

When you take a look at some of the “victims” of Nick Roddriguez along this ADCC run, it is scary, to say the least. He disposed of Mahamed Aly in the very first round, before making quick work of Orlando Sanchez. Then, in the semi-finals, he beat a legendary grappler in Roberto “Cyborg” Abreu, a black belt for well over a decade. And he did it all as a blue belt with barely over a year’s experience in BJJ. On that account, of course, I want a Nick Rodriguez DVD! Moreover, Nicky took everyone down, thanks to his immense wrestling background. Pair that up with Danaher’s back attacks and you have the perfect winning formula in the Takedowns To Back Control instructional.

Previously I wrote about a concept in Jiu-Jitsu, that preaches getting top position, and staying there for the remainder of a match. That’s a proven way of getting both points, and submission opportunities while minimizing risk as much as possible. To that extent, you’ll hardly get more experienced top game players than wrestlers. And Nicky Rodriguez is a top-level wrestler, to begin with.

This Nick Rodriguez DVD has four volumes. Throughout them, he covers different ways of getting the match to the ground and going to the back. From there on, it is down to you to finish. Points wise, this means six points and a position of safety where you can choke people out. The first part covers snap downs, for the most part, followed by innovative back takes. Part 2 is all about arm drags and misdirections, before some wrestling classics in part 3. Finally, there’s some genuine Nicky Rod craziness in the fourth and final volume oft he “Takedowns To Back Control” Instructional.

After a short introduction, Nicky goes straight to work covering the slide by. This is one of the staple wrestling moves that people in BJJ, for an unknown reason, oftentimes shy away from. Ther are a couple of options here, including a mat return one. The following part is what really caught my eye, as I am a fan of front headlocks. The S- Snapdown is an advanced wrestling way of ensuring posture isn’t an issue when you’re snapping someone down.

In terms of back takes there are two chapters, each going over a bunch of never before seen details. Between the knee lever and cross trap back take, I have to pick the second one, although both are really sneaky and effective.

The second portion of this Nick Rodriguez DVD goes over the arm drag during the first half. As far as wrestling classics go, the arm drag is something that writers learn at the earliest possible age. It works like a charm, all the way through to the highest levels of wrestling In Brazilian Jiu-Jitsu, it just opens up even more opportunities. The way Rodriguez likes to set it up is by using tension. So much so, in fact, that his arm drag variations are called the high tension arm drag. It opens up direct routes to the back (as expected) as well as key single-leg entries. The swing single is something well worth checking out.

The second part of the instructional covers a few interesting concepts before continuing with takedowns. The misdirection approach is amazing, and it really opens up the back like nothing we’ve seen before. Pair it with inside and outside ankle picks, that are also in this portion and the arm drag from before and it is an unbeatable way of getting on someone’s back. “Takedowns To Back Control” indeed.

Part three is for people that truly enjoy throwing others around. In his ADCC match with Mahamd Aly Nicky Rod nearly killed a photographer when both came crashing on him after flying across the mats. Now, you can learn the same tactics, with his take on the hight crotch and the famed Nicky Rod Dump. And no, it turns out oy udon to need Nick’s amazing athleticism to pull the Dump off. It is all about leverage, as are most things Renzo Gracie related.

A bit of defensive tactics with a single leg defense kick through comes next. One defensive ankle pick later, though and it is back to the offense with the crazy shin Whizzer that’s the real game-changer in this “Takedowns To Back Control” Nick Rodriguez DVD.

This is a special portion of this instructional. It contains true Nicky Rod signature stuff that’ll make you smile. However, it is not just nutty stuff like the Pancake or re-shooting on a low single. You’ll find details on the signature cartwheel pass Rodriguez does to perfection. You’ll also find invaluable information on how to actually roll and compete with higher belts, something he does on a regular basis. Thre’s also a portion on how he improved in BJJ so fast, so good. Finally, there are a few more awesome moves to round off a perfect DVD that’s really refreshing among all the DVD instructionals we see nowadays.

Nick Rodriguez DVD on taking people down and choking them is just what the doctor ordered before Christmas. This is the perfect time of the year to develop some mean and proven strategies of beating people in competitions. “Takedowns To Back Control” is one of a kind instructional that can help anyone, from white to black belt. Plus, Rodriguez really knows how to break everything down, not just throw people around lie rag doll. Check it out!

ON SALE HERE:
Nicky Rodriguez – Takedowns To Back Control