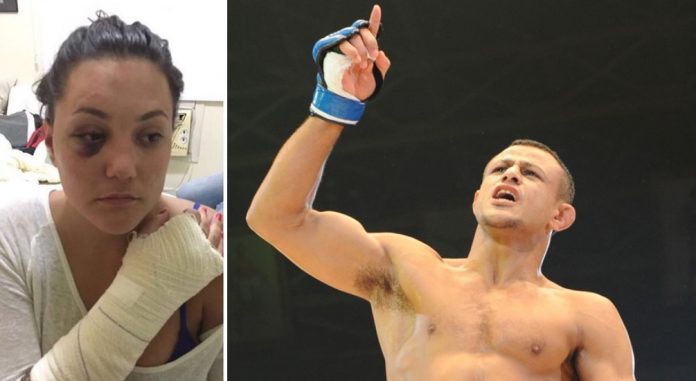 Marlon Sandro is a 2nd degree BJJ Black Belt, MMA fighter and the veteran of the featherweight division of Bellator MMA.

According to combate.com, on Thursday night Marlson Sandro and his Fiancee Tayssa Madeira were returning from the football match of Flamengo.
Soon after a verbal altercation between the couple Marlon Sandro choked out his fiancee Tayssa Madeira and left her unconscious on the street. After she woke up, he started kicking and punching her. Tayssa Madeira, somehow, managed to escape and she went directly to police station describing what happened. She reported the case, hoping Marlon will be arrested, but with no success.

This assault happened on the streets of Catete, South Zone of Rio de Janeiro.

Tayssa Madeira’s friend Lila Portasio posted pictures of Tayssa beaten by Marlon Sandro on her Instagram profile and she wrote:

“…you reading this post may find it shocking to be reading this post. You may be wondering how someone has the courage to expose themselves that way. If you thought that way, reflect. The correct question is: how can one have the COURAGE OF DOING THIS WITH A HUMAN BEING ??? Even when monsters such as @marlon_gladiator will go unpunished in cases of violence like these in the square San Salvador, Laranjeiras, Rio de Janeiro. What right does this monster think he has to beat his girlfriend or anyone else? Is it because he has learned MMA and is a fighter who is in the right to solve everything in the beating? For these are not the teachings of the struggle. What argument or fact justifies this? None. Nothing justifies aggression. NOTHING WILL NEVER JUSTIFY MEXER WITH THE INTEGRITY, BE PHYSICAL, MENTAL OR MORAL OF ANY HUMAN BEING. That justice can be done. No #empanelman will pass us by! Share this post because this guy needs to be arrested”

Soon after the rumor of an incident spread, Andre Pederneiras, leader of the Nova Uniao team to which Sandro is affiliated, announced that Marlon Sandro is kicked from the team after a long time of being a member.

Andre Pederneiras confirmed to MMAJunkie that he wasn’t able to reach Marlon Sandro, but that he’s been removed from the team in light of the seriousness of the accusations.

Tayssa Madeira’s statement on the case for MMAJunkie.com

Tayssa talked to MMAJunkie and she said that she never wanted the exposure and that social Media campaign was started by her friends. She also said she wasn’t the one who asked for Sandro to be kicked out of the team and that she didn’t want to press charges against Marlon Sandro.

“I love his children, so I care greatly about them,” Madeira said.
“I died on the inside,” Madeira added. “I have nothing else to say.”

Marlon Sandro is a 40-year-old Bellator veteran who also competed in Shooto Brazil, Sengoku and Pancrase events. He’s also the cornerman of many UFC fighters including Jose Aldo. He ended his MMA carrer on Road FC event with a loss to Mu Gyeom Choi via desicion.