To be fair, the DVD I’m about to review today is one of the best BJJ DVDs ever issued. Today, I’m doing a Kristian Woodmansee DVD review on the Dream Killer’s latest digital instructional, this time covering the 50/50 guard. The 50/50 is one of the most curious positions in Brazilian Jiu-Jitsu. It comes and goes faster than other positions, but always seems to return to the highest levels of competition after a short hiatus. Not everyone is up to date on what you can do from there, but Kristian is certainly one of the few that know it inside out. Now, he finally shares some of his hard-earned 50/50 guard knowledge with us!

The 50/50 guard is a simple position- you either like it or you don’t. However, if you’re to have any issues in BJJ, Go or No-Gi, and even MMA grappling, you need to know what to do from this versatile guard. There’s literally nothing you can’t do from the 50/50 guard. Sweeps, stalling, submissions, heel hooks, whatever you think about is at your disposal. Moreover, it is notoriously hard to pass particularly in the Gi. Sounds like the perfect position, right? Well, yes, but only if you know how to use it to your advantage. If there’s one person out there that really understand the modern 50/50 guard it is Kristian Woodmansee. This right here is the most comprehensive 50/50 guard Kristian Woodmansee DVD review.

Before we get on with the 50/50 guard with Kristian Woodmansee DVD review, let’s clear up a few things first. The 50/50 guard is one of the best positions you can get in Jiu-Jitsu and even MMA. However, there’s a bad rep that follows this guard, and it is time we clear the air on that subject.

The 50/50 guard is a grappling position that is just as old as grappling martial arts themselves. In BJJ, it was pioneered by the Mendes brothers. Although BJJ legends like Saulo Ribeiro and Roger Gracie did find themselves in the position prior to the Mendes brothers, they did not rate it, nor consider it a guard. When the Mendes brothers started doing it, they primarily used it to sweep and gain advantages in order to win matches by points. This soon made the guard gain a reputation as a stalling position and the grappling community turned away from it.

The second coming of the 50/50 guard was also marred by controversy. A few years after the Mendes brothers, Ryan Hall revolutionized leg locks, in particular, heel hooks, thanks to the 50/50 guard. As he transitioned towards MMA everyone saw a new use for the 50/50 and it erupted once again. However, this was also short-lived, as the IBJJF doesn’t allow heel hooks so the guard’s usefulness was limited at best.

Finally, the third wave of the modern 50/50 guard is what we just saw at the 2019 Mundials. Plenty of grapplers ended up as world champions thanks to their 508/50 guard prowess. The modern 50/50 game actually has everything – leg locks, defense, attacks, stalling (if needed), ways of passing the guard and much more. And Woodmanse is the man to break it all down to the finest details.

Kristian Woodmansee a.k.a. The Dream Killer

Given that Kristian is an IBJJF Pans world champion and No-GI Worlds bronze medalist. So far. Before black belt, he has multiple World and European titles at roster weight. He is a very well rounded grappler who won most of his titles in No-Gi. That fact, coupled with the fact that he trains at Atos, where they pay a lot of attention to Gi training, makes him the perfect professor to teach the 50/50 guard.

Kristian is another grappler who found out about BJJ fairly late in life. He stumbled across it when he was 20 years old in Philadelphia. Up until brown belt, he trained with pretty much everyone that matters, from Robert Drysdale and Cyborg to Loyd Irvin. As of 2014, he is an Atos Jiu-Jitsu representative. In 2016, Woodmansee received his black belt from Atos leader Andre Galvao. Kristian, now 31, also tried his hand in MMA as well.

To be fair, Kristian has not competed at the highest levels during the last couple of years. He has, however, been busy. So far he has several BJJ DVD instructionals out, mostly on the subject of open guards. However, it is his latest one that really catches attention. Check out the most detailed Kristian Woodmansee DVD Review of the 50/50 guard below.

There are not plenty of BJJ DVDs out there that I had to watch several times in order to do a review. Doing this Kristian Woodmansee DVD review of the 50/5 guard instructional is by far one of the most fun reviews I ever did. The DVD seems simple, yet it turns out that it has far more complex content than it appears. Woodmanse is an awesome teacher, which is usually the case with Atos Jiu-jitsu black belts. His systematization of the modern day 50/50 guard is also perfect to a T.

The 50/50 guard with Kristian Woodmansee DVD instructional comes in a single volume placed on one DVD. It is, however, exceedingly long and has well over two dozen chapters. They way Woodmansee moves through the DVD is also very precise. He starts off with the ins and out of the 50/50 guard. He covers getting to the guard, staying in the guard with a purpose as well as ways of escaping the guard. Sound and camera work are pristine, making this DVD arguably the best possible resource on the modern day 50/50 guard.

The first few chapters of the DVD are all about what the 50/50 guard is and how you can make sure that you have the upper hand. One issue with the guard is that your opponent has just as many opportunities as you do. Well, Woodmansee takes care of such common issue by introducing an innovative grip fighting system. True to Atos philosophy, there’s a lot of lapel work in there, some of it fairly intricate. It all makes sense though, as I discovered during this Kristian Woodmansee DVD review.

Kristian’s take on the 50/50 basic also include some basic entries to the guard. Some you know, but you don’t fully understand while others are brand new. In any case, this DVD clears up a lot of questions most people have with the 50/50 guard in the Gi.

This is the portion that Kristian is unrivaled in. Attacking from the 50/50 guard is usually difficult as the opponent has easy ways of keeping your hips on the ground. Kristian’s grip fighting system, as we already saw, takes care of the 50/50 situation, turning the guard more into a 90/10 for you. From there, there are countless ways of attacking, as long as you follow some of Woodmansee’s basic attacking principles.

The one thing I particularly enjoyed is the way Woodmansee approaches sweeps. Namely, he doesn’t just look to end up on top. As per the IBJJF rules, if you just get up from the 50/50 without actually disengaging, you only get an advantage rather than points for sweeping. Well, instead of disengaging, Kristian will teach you how to sweep directly into a pass that leads to side control, or the back.

On the subject of submissions, leg locks are a huge part of Woodmansee’s game, so they do feature, albeit in an IBJJF friendly version. That translates to mostly ankle locks, Estima locks and toe holds. Some intricate 50/50 armbars are also in there, providing variety and further attacking options.

We get to the final part of this Kristian Woodmansee DVD review, as well as the final third of the 50/50 guard instructional. The Dream Killer certainly saved the best for last, providing some crazy ways out of the 50/50. He solves of the main puzzles this guard presents – how to dismantle and disengage without giving away points or submission. Once again, Kristian demonstrates ways of passing the guard that nobody has shown before.

Wrapping this incredible instructional up is a portion that focuses on defending leg locks from the 50/50. Let’s not forget, Woodmansee’s best titles are in No-Gi, so he is more than aware of any lower body submission dangers. That said, he does cover mostly IBJJF-related leg locks, so you won’t find heel hook defenses inside. However, there are some crazy counters that either lead to the back or in a leg lock of your own. In fact, the one most important principle for winning a footsie battle from the 50/50 is right here in this Kristian Woodmansee BJJ DVD instructional!

If you are a modern day 50/50 guard player than you simply can’t go ahead without this DVD instructional. Moreover, if you do not particularly like the 50/50, you need this DVD in order to understand how to get out in the safest possible way. Our Kristian Woodmansee DVD review had the task of laying out how this DVD works, and what you can expect inside. Kristen’s role is to present the information and organize it in a meaningful way. We did our best, Kristian certainly did more than anybody could expect. Now, it is down to you to pick up the instructional and start conquering titles! 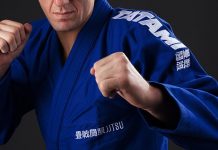 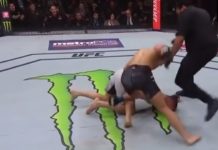 Justin Gaethje Spent Only 17 seconds at the Bottom Position in UFC. Watch all 17 seconds! 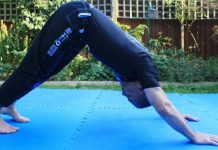