It is no secret that our military heroes getting discharged from combative service and entering back into the civilian world experience challenges. Coping with combative trauma, changing dynamics in family/friend relationships, finding/maintaining fulfilling employment, and understanding how to navigate daily stressors and different personality types, the challenges endured are real and can be very tough.

Knowing that these challenges can lead to substance abuse, homelessness, broken relationships, psychological hardship, and even suicide, there clearly is something broken in the system that equips our military heroes to dive back into the civilian world successfully. This idea is what sparked Dr. Gino Collura to dive into BJJ and explore its use as a tool for military veteran reassimilation.

Dr. Collura conducted a study with combat veterans in Tampa, Florida, who have been participating in BJJ and documented changes that training has made in their lives. The results were outstanding. He documented positive changes in mental health, improvement in domestic relationships, easier navigation of daily stressors, reduction of substance abuse and an overall enhancement in quality of life through the relationships built on the mat and the confidence gained through training. An excerpt from one of the study’s participants (a former Marine Corps infantryman) is found below:

“for me….when I started up BJJ classes…it was about needing to lose the beer gut that I got after being out…I got a little bit of training in MCMAP [Marine Corps Martial Arts Program]…but that was it. Then as I kept going week after week I started feeling alive again. I got back to a place where I felt good about myself, didn’t need the beer anymore, and felt like I had something to contribute to my life as a civilian. The thing about being a Marine is that once you are a Marine, you are always a Marine. I knew I wasn’t making the Corps proud being a fat drunk so BJJ changed that for me. The ‘motivate-kill’ motto left me over time as it became much more about being a Marine in the civilian world and being a leader and example to others. I got that through the brothers I have found in BJJ and how it is that they conduct themselves. The guys that I train with are absolute animals on the mat…the best in the world. But the cool thing is that they are very gentle and humble…they don’t boast about it or show ego…that kind of attitude will get you’re a** kicked fast. They are relaxed and can roll with the punches in any situation. They remind me a lot of the tier one guys I used to know over in Afghanistan…they were subtle and calm…but you knew not to mess with them. Training has created that same space for me but here at home. How I reacted to danger over in Afghanistan and how I react to it here are totally different….here I walk around in shorts, flip flops, and a T-shirt….if something dangerous happens I am looking to get others to safety and even if an idiot starts talking shi*, I am not looking to kill the guy…just submit him and get him to realize he is being an a**. That’s been the biggest thing for me…I will forever be a Marine but the way I see threats as a civilian is different…it’s not about killing…it’s about being calm and still carrying the warrior and marine code…just applying it differently…if it wasn’t for BJJ, I probably would have ripped a bunch of people’s heads off by now…not even kidding.”

BJJ as a Lifestyle and Effective Therapy 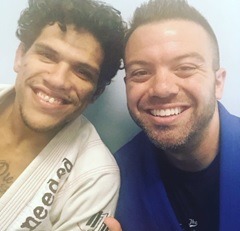 In a brief interview with BJJ World, Dr. Collura states, “For those of us who have trained in BJJ for a while we know there is something special about it. The Brotherhood, the camaraderie, the customs and loyalty found within the art and sport are very powerful. It has the potential to change lives and I wanted to dive into the roots of it and see if that hypothesis was true, scientifically. Turns out that it is and it can do incredible things for folks in the veteran community who are going through some very real hardships.”

His study had a range of servicemembers that canvased every branch of the United States Armed Forces with the majority being from the U.S. Army and U.S. Marine Corps veteran community. He explicitly studied individuals who had been exposed to combat and/or participated in combat in different campaigns post-September 11.

Given the high rates of veteran suicide as well as the prevalence of PTSD within the combat veteran community, he wanted to focus on the challenges that combat veterans faced when coming home after enduring multiple deployments, firefights, IED explosions, ambushes, the loss of friends and displacement from home. Dr. Collura states, “The study was designed to see if BJJ participation actually had an effect on those servicemembers who had experienced horrific levels of trauma. Things that most of us could never imagine seeing or enduring. These are the folks who often have some of the hardest challenges in relating to others back home as they have seen things and experienced things emotionally that makes it exceedingly difficult to relate to others. They often carry a much different view of the world and the human capacity for violence than those who are shielded from war and the consequences of participating in it.”

An interesting facet of Dr. Collura’s study was his focus on Counter-insurgency training and the problems it can create for veterans coming back home after deployment. He highlights how “winning hearts and minds” works well when your enemy is easily identifiable, but when the enemy is embedded in the same community you are trying to win over it makes it very difficult to trust anyone. This challenge with trust often carries over into servicemembers’ civilian life and contributes to challenges experienced with marriages, interactions with children, employment, and creating new relationships. Participating in BJJ forges a level of trust that cannot be denied. Pushing through the sweat, pain, blood, injuries and knowing that our training partners will let go when we “tap” requires an immense amount of trust and camaraderie that is very difficult to duplicate in other environments that are not dependent on combat. Forging trust allows servicemembers to create new meaningful relationships that create opportunities for friendships which can be challenging to identify outside of the military as seen in this excerpt from one of the study participants:

“the BJJ gym is my new Afghanistan. It’s much nicer, has air condition, and no one is trying to shoot me or blow me up, but it gives me purpose and meaning. It keeps me in combat while also making the best friends anyone could ask for. We all share the same struggle on the mat but are all here for one another at the same time. We sacrifice ourselves not only for our own betterment but also for the betterment of our teammates.”

BJJ Tuition Paid by the Government

Collura’s goal is to identify ways to have the Department of Veterans Affairs (VA) or Tricare (Military Health Insurance provider) cover the cost of BJJ participation for veterans. With many health insurance companies providing incentives and often covering the cost for individuals who are involved with proactive medicine, there are great efforts being pushed forward to have the cost of BJJ academy tuition covered by the government. Collura states, “With so many of our nation’s servicemembers struggling to fit back in we should be doing everything in our power to encourage healthy lifestyle activities that are physical, mental, and social in nature. Having an activity like BJJ that promotes all three while empowering our military heroes with a skillset that can help in so many different facets of life there is a tremendous opportunity to curve substance abuse, mental health challenges, as well as a lack of socialization for veterans.”

Those of us who train know that the beauty of our art is found in the little wins that we make each time we hit the mat. The idea of a “tap” does not signify loss, rather, an opportunity for us to learn where we made a mistake to ensure it does not happen again. Dr. Collura’s study drove that point home with the mental power that BJJ provides for military veterans who may carry guilt, depression, and anxiety/stress that stems from how they were trained in the military. One of the study participants state:

“No one likes to lose, man. When you are taught that you can’t leave a man behind or mission failure means people are dying you get rigid when people around you don’t give it their all. Back then our all meant giving our life for the mission. As a regular guy, the people around me would think I’m nuts if I said I’d die for whatever goal is at hand. BJJ makes you look at mission failure in a different way. It isn’t that you lost, it’s that there’s a better way to do it and I just haven’t figured it out yet. You get a direct response which is cool, but being able to accept that you can be beaten and still come back better took me a while to get….but I got it and it has made a huge difference for me.”

With the VA spending over $2 Billion a year on trauma treatments and medications that often do not work, the time has come to consider alternative approaches that are proving to be effective, are a fraction of the cost, and give our servicemembers an outlet that is dependable, relatable and connected to a global brotherhood.

To read the complete study click the link below.