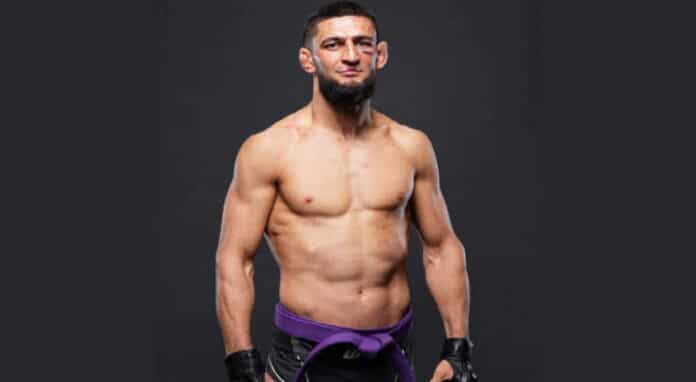 Khamzat Chimaev has revealed how long it will take him to gain a higher belt in Brazilian jiu-jitsu. The Brown Belt in his case.

Chimaev claimed a unanimous decision victory over Gilbert Burns at UFC 273 on Sunday, one of the best fights of the year. It was the first time ‘Borz’ was truly challenged in his UFC career, having had to recover from a tough second round.

After the battle, Swedish Chimaev was promoted to purple belt in Brazilian jiu-jitsu by his trainer Alan “Finfou” Nascimento. The BJJ veteran had challenged Chimaev to become the first person to submit Gilbert Burns in MMA. While he didn’t win ‘Durinho,’ Chimaev’s coach was clearly inspired by the bout.

Chimaev uploaded a photo with his new belt on Instagram and announced how long it will take him to attain a brown belt:

“Thank you, coach. Now I have to work for 5 more years to get my next belt.”

The purple belt in BJJ is considered a transitional ranking in Brazilian jiu-jitsu. Based on several BJJ ranking systems, athletes must usually spend at least 18 months to two years as a purple belt before becoming eligible for a brown belt.