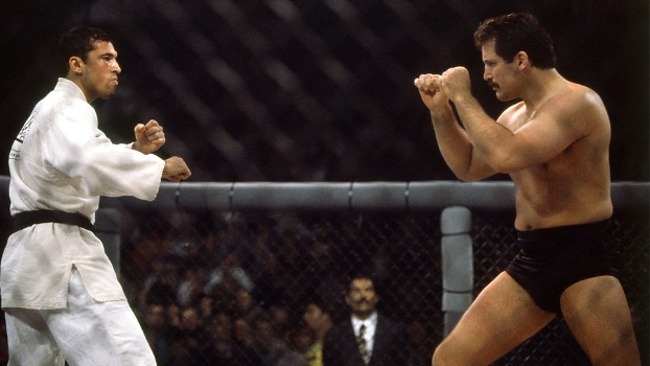 Old School BJJ, Modern BJJ, Combat Jiu-Jitsu… The list goes on and on. We’ve all heard of all the nutty BJJ spin-offs that are evolving around the world. Some are cool and legit, others are as effective as “the touch of death”. However, the old school vs. modern BJJ debate is here to stay, and it won’t be settled any time soon. While I can’t see a reason for choosing one over the other, instead of using both to build your own, the fact remains that the original Gracie Jiu-Jitsu is quite far from what we perceive as BJJ nowadays.

Everyone involved in BJJ, and even a few people outside of it, know the history of the art. And by history, I mean that the Gracie family is behind what we call today Brazilian Jiu-jitsu. The Gracies did innovate a lot to come with their own version of JIu-Jitsu, one that saw them take on everyone willing to test themselves against it and win. That brand of BJJ still nurtured within the Gracie family is what we know today as Gracie Jiu-Jitsu. However, in today’s world of BJJ, Gracie Jiu-Jitsu might find the modern, evolved version of itself quite the hard opponent to beat. This, of course, sparks a never-ending debate of which strain of Jiu-jitsu is better. 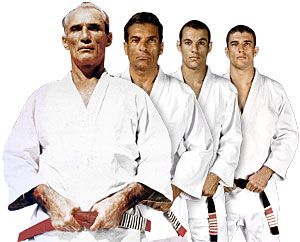 Gracie Jiu-Jitsu, or old school JIu-jitsu as it is called today is the original version of Brazilian Jiu-Jitsu. In essence, this root BJJ version is a self-defense system first, and a martial art second. When it was created, it was never actually seen as a sport. That philosophy is actually the biggest difference between modern and “old-school” Brazilian Jiu-Jitsu. Conversely, the philosophy defines all the other differences too, which are in essence, not of a technical nature.

Belt philosophy, striking training, close to combat Jiu-Jitsu. No fancy stuff, just simple moves and extreme knowledge of leverage, pressure, and concepts.  The philosophy of Gracie Jiu-Jitsu is simple – shorten the distance, clinch, takedown, and control from mount or back. Whether you decide to hold, submit or strike, you can end a fight when you desire. It was a powerful concept, that clearly worked, given that the Gracies lost very few of their challenge matches prior to the UFC. Post UFC, we all know what happened and how the Gracies fared in Pride and other organizations which further solidifies Gracie JIu-Jitsu as a well-rounded system of fighting.

Today, Gracie Jiu-Jitsu still exists, although it has blended into the sports aspect. In truth, outside of Gracie gyms run by the likes of Rickson Gracie,  it is hard to really find this style of teaching. More and more Gracie academies have dedicated a lot more to sports BJJ, than keeping up with the No-holds-barred style of Gracie Jiu-JItsu.

That brings us to the state Brazilian Jiu-Jitsu is in these days. Modern Jiu-Jitsu has a lot of the same sweeps, submissions, and other techniques that were there in the original Gracie Jiu-Jitsu system. However, it has evolved so much and built upon every single aspect of old-school BJJ, that its arsenal is now indefinite. However, all that variety that makes it ultra fun as support, makes it a lot less effective in a self-defense scenario.

Today, the sport of BJ J has grown past anything the Graceis would have ever dreamed of. There’s GI BJJ training even at the most remote parts of the world. The game now is ultra-complex with people using their Gi to wrap opponents up in a myriad of ways. In other words, sports BJJ uses ultra-complex ways of still achieving the simple tasks of Gracie Jiu-Jitsu – control and submit. Plus, there’s a point system that goes with it, making it a creature of its own.

As a sport and martial art, modern BJJ is extremely fun to train. In fact, it is this type of BJJ we’re all addicted to. Placed in a situation of self-defense, it will still do the trick, albeit less effective than old-school Jiu-Jitsu. Most academies nowadays teach BJ jas a sport and only touch on the subject of self-defense. Plus, just about anyone involved nowadays looks to figure out something new, keeping modern BJJ in a constant state of flux and evolution. While Gracie Jiu-jitsu had a clear-cut goal – beat everyone, modern BJJ is still wide open for interpretation.

This is the age-old debate that we’ll never see settled. At least not in a satisfactory manner. Let’s look at it this way. The requirements for getting any belt in sports BJJ are to have a well-rounded enough game to be able to cope with most people at that belt. With Gracie Jiu-Jitsu it was (and still is) about being able to defend yourself with success in a real-life violent confrontation scenario. So, finding a setting to really test the two in a real manner would be pretty hard.

In a sports environment, modern BJJ would of course thrive. From point tactics to stalling strategies, only modern BJJ can defeat modern BJJ. In a sense of a real fight though, Gracie JIu-Jitsu has the upper hand for sure. If nothing else, the mentality of being involved in a fight rather than a match is a million miles away from the security of a sports competition.

The bottom line is that it is dumb and pointless to have to choose a side to belong to. It is as useless as BJJ affiliations are. Instead, why don’t we train in both these types of Jiu-Jitsu and acknowledge the mas part of the same thing? There’s no point in bickering about which is better when we can combine the two and end up with the best version of Jiu-Jitsu yet!

The fact of the matter is, people who have been training since the old days will always have a bias towards Gracie Jiu-Jitsu. The same holds true for all modern grapplers.  And that’s perfectly ok, everyone has preferences. Still, I think that modern BJJ has a lot to learn from the original Gracie Jiu-Jitsu, but the same is true the other way around. There are people out there that are awesome at both, so here’s to hoping they’ll end up merging everything into an exciting new development.

Understanding of Concepts Will Skyrocket Your Jiu-Jitsu