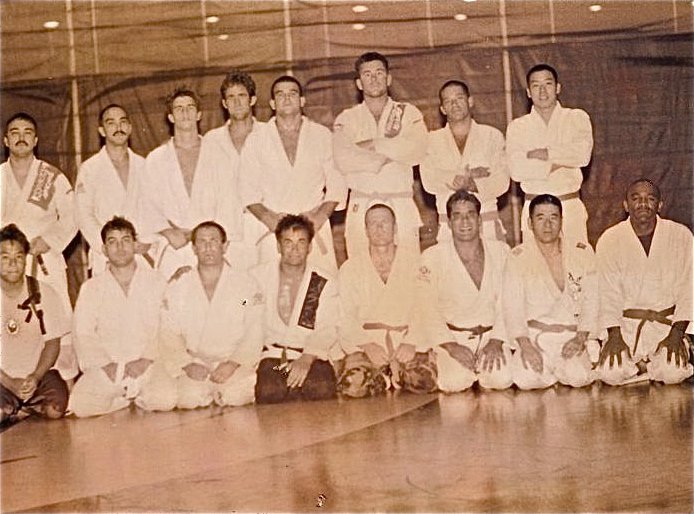 The Dirty Dozen. For most in their 20-s, this might be just an old movie, but just about everyone a bit (and more) older remember it as a classic. There’s no point in going into the movie here, it is enough to know the origin of the title. Why? Because in JIu-JItsu, we have a BJJ Dirty Dozen of our own. In fact, we have two – the male and female Dirty Dozen. Today’s focus is going to be on the masculine side of things, featuring the original black belt old-school tough guys of BJJ that were not of Brazilian origin.

The BJ JDirty Dozen is a list made up fo people that received their BJJ black belts. Were they the first ones to do so? No. I think it is safe to assume that if we’re looking at the very first BJJ black belts, most of them, (probably quite more than a dozen) are going to be Gracie family members. Nope, the Dirty Dozen is the perfect fit for the group of people that got their black belts but weren’t Gracies. In fact, they weren’t even Brazilian, to begin with. Let’s see who exactly made up the BJJ Dirty Dozen and where these people are today.

Back in the early days of Brazilian Jiu-Jitsu, before it became famous through the UFC, not many people outside of Brazil were aware of what it is. Still, there were people that picked up quite early on it, albeit even most of them did it in the early and mid-’90s. Still, these are considered to be the pioneers of JIu-JItsu in the western world, given that every champion and black belt before them was of Brazilian origins.

The reason we’re looking into them is that, first and foremost, the story of the BJJ Dirty Dozen is a cool one to know, Secondly, throughout the years there have been many versions of the list, given the sketchy records from the 90s. Still, nowadays, with JIu-Jitsu spread across the world, we can say with a high degree of certainty that we finally know who the real BJJ Dirty Dozen are. The best thing about them is that some of them are still at large, and are to this day, among the top BJJ coaches in the world.

A BJJ black belt is a huge achievement in any era, regardless of geographical origin. However, in those old-school days, where JIu-Jitsu was more Vale Tuda and less the sport we know today, getting one was like becoming a superhero. Plus, when you add to that the fact that all of the Dirty Dozen folks are legit black belts with complete lineage and all, things are even more impressive. Wait till you read all their stories, from living with the Gracies to taekwondo black belts that ended up beating Brazilian BJJ Champions.

Where do we start with the BJJ Dirty Dozen? I guess it is best if we start off at the beginning, with the very first known member of this infamous group of grappling assassins. Let’s begin our journey in time with Craig Kukuk.

Craig Kukuk was is the first native to get a black belt in Brazilian JIu-Jitsu. He completed this impressive feat in 1992, a year before the UFC exploded Jiu-Jitsu. He was also the first to open a BJJ academy in the USA, more precisely in New Jersey.  For such a BJJ dignitary, of sorts, he was never one to publicly present and advertise himself. He remains a bit of a mystery to this day, although he was, by all means, a highly accomplished grappler. He got his black belt from Royler Gracie, somewhere in 1991.

A Rickson Gracie black belt. If fact, not just one of Rickon’s black belts, but his very first American one. He received his black belt in 1995 after training for what was more than a decade. One of the earliest practitioners of the art of a non-Brazilian origin. Currently, he is active in California, teaching at Gracie Laguna Niguel. 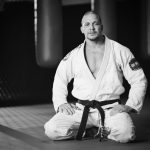 A former MMA champ, UFC veteran and a lifetime martial artist, Lewis just so happens to be one of the BJ JDirty Dozen as well. He is an Andre Pederneiras black belt and the man who coached people like Chuck Lidell, Tito Ortiz, Kevin Randleman and a host of other MMA legends. He also has victories over Rumina Sato and an epic draw against Carlson Gracie Jr. to boast with. His background is no less impressive with a Judo black belt from gene LeBell preceding his BJJ black belt.  He is one of those who went from blue to black belt, albeit from a highly legitimate coach.

Ken Gabrielson is a Reylson Gracie black belt from way back in the day. The exact date of his promotion in unknown but it is somewhere in 1995, most likely. He was actually thought to be the second member of the BJJ Dirty Dozen to get his black belt in 1992, which turned out to be wrong. Little more is known about Ken at this time, including his whereabouts and whether he still trains or not.

Lucero is a name that’s quite unfamiliar in BJJ circles, mostly due to his wrestling background. He is known, though to anyone in the Mohave Valley, Arizona vicinity where he runs Lucero Jiu-Jitsu. A 6th-degree black belt and Judo black belt, Rick is a real grappling machine that’s still going strong.

Joe Moreira was the man that promoted both Rick Lucero and Marc Baquerizo to black belt, making them both a part of the BJJ Dirty Dozen. Marc has some crazy stories about his origins, training with Moreira who couldn’t speak a word of English in those early days. He also witnessed first hand some of the notorious Gracie Challenges, as well as brawled himself with Tank Abbott, among other things.

Boran is the final in a trio of Moreira black belts that are a part of the BJJ Dirty Dozen. He is actually one of the rare people that have more than just a martial arts background. Apart from being a taekwondo black belt, he also used to be an Ivy League linebacker for Columbia University. He also has some early training with the Gracie family before switching to Moreira. He was promoted to black belt in 1996 in the same ceremony as Marc Baquerizo and Rick Lucero.

Bob Bass is the man that beat Marcos Feitosa, a Gracie Barra standout even back then in the 1995 Pans. He achieved this feat as a brown belt, clearly demonstrating he was the next member of the BJJ Dirty Dozen. He got his black belt from Rigan Machado and today holds a 5th degree. He currently teaches in his own school in Hermosa Beach, California.

Williams is yet another Rigan Machado blаck beлt that is a part of the BJJ Dirty Dozen. Rick Williams also comeс frоm a wrestling background that won the BJJ Pans in 1996 with ease. This feat was at brown belt, which was closely followed by his promotion to a black belt soon after. He went on to teach at the Machado South Bay academy with Bob Bass.

By far the most easily recognizable name on this list. Chris is not just a legend of the sport, an extremely active competitor in the early days, and a member of the BJJ Dirty Dozen, but also one of the most active coaches today! He still holds seminars, issues DVD instructional and is one of the rare coaches that can connect old school and modern Jiu-Jitsu. He ruled the competitions scene in the ’90s and early 2000s and has been a black belt under Rigan Machado since 1996. Also a World and Pans Champion.

The final two names in the BJJ Dirty Dozen also happen to be Rigan Machado black belts. Meyer is one of them with the other, John Will, concluding the dirty dozen list. Mayer was a black belt in Japanese JIu-Jitsu when he started BJJ. As expected, he progressed really fast, competing a lot along the way. He is still somewhat active as a Masters competitor with his last World medal being silver in 2012.

Wrapping up the BJJ Dirty Dozen is John Will, a man who wasn’t on this list for quite some time since it first came out. After some research, it turns out he beats previously placed number 12, Rick Minter, by a mere couple of months when it comes to his black belt promotion. As mentioned, another Rigan Machado black belt from 1998. The Australian is a pioneer for BJJ down under and is behind some great MMA names like George Sotiropoulos, Elvis Sinosic and Anthony Perosh.

Here’s a thought. Just imagine the craziness if al lof the above-mentioned members of the BJJ Dirty Dozen found themselves in the same room at the same time? That’s mind-blowing, but I sincerely doubt it ever even came close to happening. Still, the fact remains that these early grapplers, today seen as OGs, really paved the way fro Jiu-Jitsu to spread outside Brazil. What’s most impressive is that they did it when it was hardest, and most of them are still at it. That said, they were soon joined by the Female BJJ Dirty Dozen, so keep your eyes peeled for an upcoming article on that subject in the near future.