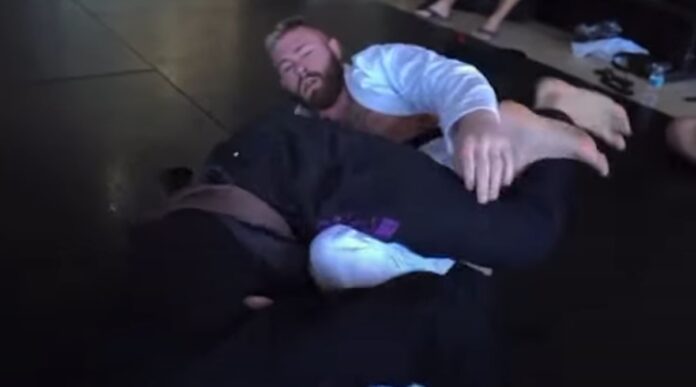 How often do you think Gordon Ryan tapped in training? In a video from the 2020 Modolfo camp, we see Gordon Ryan rolling in the Gi with a then brown belt Ethan Crelinsten, who manages to tangle him up in a tight kneebar, to which the “King” had to tap out.

BJJ World, take notice. Gordon Ryan tapped in training! During a sparring session at the 2020 Modolfo camp, which featured elite athletes rolling and sharing knowledge, Gordon Ryan rolled with the Gi, and one of those sessions, in which he tangled with Crelinsten ended up with Gordon Ran tapped out.

The short video shows Ryan holding a worm guard, and attempting to expose Crelinsten’s back by inverting it. Ethan re-adjusts to block the back take, getting an opening to go for Gordon’s legs. He manages to get the “King’s” top leg trapped deep into a triangle kneebar.

Gordon did try to spin out of the submission, going both ways but only allowed Ethan to sink it in deeper, and left without a way out without an injury, Gordon Ryan tapped verbally.

Everyone learns by tapping out, and the great Gordon Ryan is obviously no exception. However, this kneebar tap in training is far from Ryan’s kryptonite, as it was done in training, lightly, and in a very friendly manner. Basically, Ryan made an error in judgment trying out something he doesn’t generally do.

It is funny that something which happens to everyone else every time they train is something that gets reported as a “fluke” or super rare when the best grappler in the world is in question.

To be honest, we don’t see anyone actually getting Gordon Ryan tapped by a kneebar in actual competition, even Ethan Crelinsten.

And still, the question remains whether someone will actually be able to submit the King in a competitive match, even with the Gi?