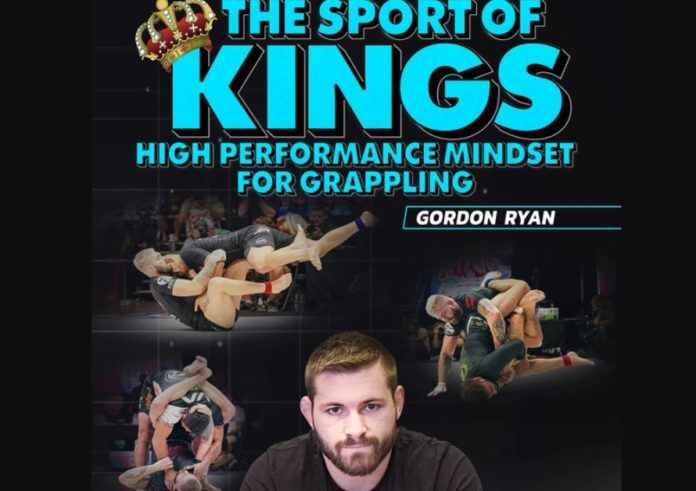 Leave it to Gordon Ryan to surprise us. From pulling amazing stuff like saying how he will submit his opponent and still managing to do it, to issuing one-of-a-kind DVD instructionals. He was the first-ever to issue an instruction in which he analyzed his competitive performance at the 2049 ADCC in extreme detail. Now, he is once again doing something extraordinary – the New Gordon Ryan DVD is titled “The Sport of Kings: High Performance Mindset For Grappling” which says all about what kind of a BJJ DVD this is going to be.

Gordon Ryan is by all accounts the GOAT in grappling, regardless of what some people think. He is simply unstoppable, and even in the rare occasions when he loses (which hasn’t happened in years) he still bounces back like nothing ever happened. That has to do a lot with his mindset and the mental way he approaches grappling with pretty much anyone. While other sports rely highly on the help of sports psychologists in preparations, that aspect is rarely if even mentioned in Jiu-Jitsu. BJJ mindset is just as important as physical and tactical preparation. The new Gordon Ryan DVD “High Performance Mindset For Grappling” covers this underrated subject in great detail.

While martial arts, especially full contact ones are always hard from a psychological aspect, Brazilian Jiu-Jitsu is among the most difficult ones even within this category. I’d argue that only MMA is more demanding on the mind than Jiu-Jitsu.

It is not just about what you think while you are rolling or fighting in BJJ. it is how you think, it is how you feel, it is how fast you process information. More importantly, it is how much you allow your mind to control your performance. In that context, mindset plays a huge role from preparations and training, all the way to those jittery pre-fight moments and of course, the fight itself. Most of us have fallen pre to our minds at least once in BJJ, whether it was in a match or a roll. the good news is that the BJJ mindset is a highly trainable skill.

The thing is, most coaches out there has no idea how to prepare you in terms of a high performance mindset for grappling. It takes a skilled sports psychologist to get you in a place where you understand how much your mindset impacts your performance. More importantly, they can teach you how to set the correct mindset in training, in pre-competition situations, and while you are performing on the mats. The only catch is that they’re unavailable for everyone, or even unaffordable. That is where the new Gordon Ryan DVD enters the frame.

What should you expect from “The Sport of Kings: High Performance Mindset For Grappling” new Gordon Ryan DVD? That is a great question, as this BJJ DVD instructional is not just different from any other out there, it is also different from all of Ryan’s other instructionals. In fact, if there is one DVD you should get, now that this instructional is available, it is this one. It does not matter at all what your rank, age, experience, or goals are. Literally, everyone in the sport needs to listen to, understand and apply the material from this instructional.

The DVD has four volumes as opposed to the usual 8 we’re accustomed to seeing from Gordon Ryan DVDs. However, given that the subject matter is a mindset for grappling, four volumes are not just plenty, they are in fact, too much for anyone to process from just one watching. That said, as usual, Ryan has everything neatly organized and uses lots of examples of matches and in-depth analysis to make everything crystal clear. It is really a one-of-a-kind instructional that will change how you think about BJJ.

there’s really not much to say for everything that you will find in this new Gordon Ryan DVD in terms of doing a review. You will need to hear the information as presented by Ryan for it all to make sense and click. That said, we can walk you through what you can expect to see in every volume of the instructional.

After a short but important introduction, Ryan starts to cover things like training schedule and goal setting which are pretty much some of the most important aspects of training BJJ anyway. Basically, he covers managing expectations through sharing different takes on how you should organize training if you are a recreational athlete vs a competitor.

The most important thing in this volume that I feel I should point out is the chapters on confidence. covering things like over and underconfidence, and how to make it work for you.  Choosing an academy, mental preparations for tournaments, as well as choosing training partners are some of the other subjects Ryan discusses in this volume. The final chapter addresses the X factor and is one of ht most important chapters in the entire DVD set.

If there is one thing that will certainly happen to you in BJJ it is losing. That is exactly what Gordon Ryan addresses in the second part of his High Performance Mindset Fro Grappling instructional.

He starts off with training, and how you should approach “losing” in training rounds and rolls. Once again, he shares different aspects of mindset training for hobbyists and for competitors. Talking about putting yourself intentionally in bad spots comes next, and it is one of the most important things in this entire instructional.

Training with higher and lower ranked belts, as well as developing a competition plan are chapters that bring this volume to a conclusion.

This is a part of the new Gordon Ryan DVD that is especially important for competitors who are looking to perhaps become professional grapplers. It covers things like funding for professional athletes, how to approach drilling, and ways to manage competition anxiety.

He then offers a system of mindset preparation, starting from one mount out of competition, and heading to a week out and ultimately, the day of competition. Very important subjects he also talks about are warmups before a fight and that crucial first match.

Before the DVD concludes, Ryan touches on whether or not you need to employ a sports psychologist and how to study the tape and analyze your opponents.

The final volume of “The Sport of Kings: High Performance Mindset For Grappling” looks into some common mental issues and obstacles people usually encounter in grappling. From the very annoying “you either win or you lose” quote, to dealing with injuries and losses, Ryan really paves the way for a different mental approach to the sport.

Hard work, discipline, and dealing with stuff that happens off the mats are all crucial chapters that ultimately lead to Ryan uncovering how you can build a routine to help you get in the perfect mindset for ultimate performance.

I can not recommend the new Gordon Ryan DVD Review: High Performance Mindset For Grappling highly enough. I am super confident that everyone will benefit from this particular instructional immensely, regardless of where they are at in their BJJ journey. Simply put, you need this DVD, and given that it really has no competition in its niche area, it is the obvious number one choice.