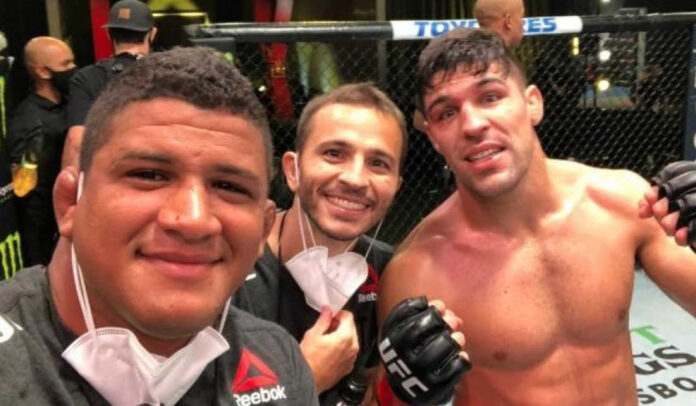 Second-ranked UFC welterweight challenger, Gilbert Burns, is known as a fighter who is willing to fight anyone, anytime, anywhere. Burns often accepted short-notice fights, and even more often he offered himself as a fighter ready to jump into many matches that one of the actors canceled at the last minute.

Still, it seems that Burns is not ready to accept all the opponents that the UFC offers him. Namely, ” Durinho revealed in an interview with MMA Fighting that he was offered Vicente Luque as an opponent, but he refused. Namely, Burns and his compatriot are great friends, and at the same time teammates, and all that is an insurmountable obstacle to arranging this match.

”I’m frustrated by the long wait for the match. But that’s part of the job. The UFC told me they wanted a fight between Vicente and me, but since there is a friendship between us, it won’t happen. The fraternity screwed us up, otherwise, we would have already fought. If we did that, the second-ranked challenger against the fourth-ranked. I would jump further with that win, and Vicente would also progress with the win. I think our situation is holding us back more than the other guys in the category,” Burns began, then explained further.

‘‘The match makes sense if we look at the rankings. They know we don’t want to fight each other, but they asked and tried anyway. However, we refused. Vicente is the only opponent in the whole category against whom I refused the match, and the same goes in the opposite direction. Other than that, I’ve already said I would fight anyone.”

By the way, Kamaru Usman was also a teammate, but also a friend of Gilbert Burns, but the duo still fought. Usman knocked out Burns in the second month of this year, and the Nigerian also changed the gym to prepare for that match. Later, Usman remained in Trevor Wittman Gym, while Burns and Luque are still members of the Sanford MMA Gym.

Vicente Luque earlier this year, in an interview with BJPenn.com, also referred to a potential match against Burns. His answer gives a broader picture of why Burns was willing to fight Usman who was also his teammate and friend, but he doesn’t want to fight Luque.

“We have already said that we will not fight each other. We are more than friends, we are brothers. Our families are very close and we have a different relationship than with other teammates. We both want to be champions and we are working on that. We also want each other to be champions. There are a lot of other guys we can fight” Luque explained in April this year.