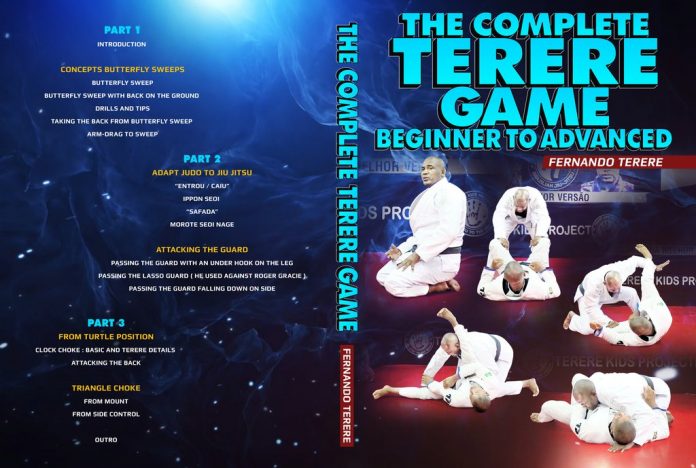 Fernando Terere is one of the most recognizable faces in Brazilian Jiu-Jitsu. The World Champion has one of the most entertaining games in the sport and has come up with some very interesting variations of moves that are extremely effective for everyone, beginner to advanced. He doesn’t have a lot of material available on his game, which is exactly why this Terere BJJ DVD is such a valuable grappling instructional. In it, you can learn ”The Compete Terere Game” step by step, from standing to groundwork.

There’s a lot to learn from the folks that have been involved in BJJ from the early days and have literally seen it all. Fernando Terere is one of them. His story is an inspirational one, even by Jiu-Jitsu standards.  He has overcome much to make sure he is on the mats, and now, he even treats us with great instruction as well. “The Complete Terere Game: Beginner to Advanced” is a BJJ DVD Instructional that everyone should have, if nothing else, just to have access to Terere’s unique moves and options.

Fernando Augusto is a Brazilian JIu-Jitsu black belt that was born in Rio in 1980. He grew up in the favelas of Rio, so engulfed in the well-known Brazilian poverty that not much is clear about his early life and upbringing. BJJ was a way for Terere to escape the slums, and escape he did. He started pretty early, going through the kids’ belt ranks first. He hit-ups and downs in his training as well, having to do several pauses at different belt levels, but eventually managed to find a steady academy in Academia Strike. Having uncanny athletic abilities, Terere won everything he could, and even as a blue belt was one of the toughest people within the gym.

Never forgetting where he came from, Terere always promoted BJJ amongst the poor kids in the favelas of Brazil. That led him to even open an academy where they could train in his old favela “Morro do Cantagalo”. This project is still active and helping lots of kids in Brazil figure out a better life through Jiu-Jitsu.

Despite winning the worlds, Pans, Brazilian Nationals, and all other competitions as a black belt, and trying his hand in MMA, Terere didn’t always have a smooth path. In 20014 he had some law trouble in the US, followed by a bout of depression that led to drug addiction. He left the sport and nothing was known until 2009 when he went into rehab and got back to teaching. He made a comeback to the competition in 2012. Fast forward to today, and we have “the Complete Terere Game” instructional to add to his list of accomplishments as well.

The nickname, Terere, comes from a famous herb used as a tea in Brazil. HE got it as a result of constantly singing a popular song at the time, which mentioned the herb.

Terere fought under the Alliance banner, although he split from them after a falling out with Fabio Gurgel. He fought in plenty of weight classes, often competing for 2-3 divisions above his weight, as well as in the absolute. As he puts it, he was always slightly claustrophobic, which led him to really develop his top game. Saying that the succeeded would be putting it mildly. He not only developed a great top game for BJJ, but he also has one of the most efficient standing systems as well. In fact, he won a world champion title against Nino Schembri thanks to one of his throws and the ability to render guards useless against him.

But it is not just throwing that Fernando Terere excelled at. He is one of the people that we have to thank for things like the Torreando pass, the leg drag, some butterfly guard hook sweep innovations, and plenty of other stuff! Most of it is in the “Complete Terere Game’ instructional, and is now finally available to everyone, from beginner to advanced.

“The Complete Terere Game” is a BJJ DVD instructional by Fernando Terere that covers every aspect of the Jiu-Jitsu game. In it, across three volumes you’ll find guard techniques and attacks, plenty of passes and top pressure positions, as well as some signature Terer takedown tactics that are extremely difficult to defend against. Given that it is Terer himself explaining everything with great detail, you also get the chance to learn from one of the most charismatic and knowledgeable BJJ professors in the world.

This is what you can expect from the instructional:

After a short introduction, Fernando Terere kicks this DVD off with the butterfly guard, something we all know works. Well, even before the leg locks rejuvenated the guard, Terere used it as the pillar of his guard game, sweeping world-class black belts at will. He really has the butterfly sweep game broken down to a science, with sweeps available from both seated and supine positions.

Apart from sweeps, there’s a really neat arm drag in there, as well as an entire philosophy on how to think when you’re looking to take. Some key drills for the butterfly guard also make an appearance in one of the chapters here. Probably the most enticing aspect of Terer’s game is his standing system. As he states in “The complete Terere Game” DVD, he likes t base his standing game around Judo and has modified certain aspects of it for Jiu-Jitsu. For example, his signature Safada takedown, which he explains completely in the second volume of this instructional. He also covers sacral variations of the Seoi Nage as well as crucial information on how to set up Judo throws in a BJJ context.

The second part of this volume features several passing philosophies and setups as well. As expected, you can find the Fernando Terere versions of passing with underhooks (Roger Gracie style) as well as dealing with the lasso guard. However, falling down on the side to pass the guard hs to be the weirdest guard passing setup I’ve ever seen!

The final part of “The Compete Terere game” Fernando Terere  BJJ DVD is all about Terere’s submission game. He starts off with subs that will help you break down the turtle position, starting off with a very tight clock choke. He then goes on to explore back takes against the turtle before delivering on some more submission options in the form of triangle chokes.

Terere’s triangle is one of the nastiest in the history of the game, and the setups he sues to get it from top positions like mount and side control are explained in great detail right here, in this final volume of his new instructional.

When Fernando Terere has something to say about BJJ, we should all listen. In “The Complete Terere Game” he has plenty to say, and he does so over there information-packed volumes. So, beginner or advanced, you need this instructional and you need to hear what Terere has to say about the butterfly guard, submissions, and ways to take people down and break apart their guard. You’ll only become a better grappler for listening to him.