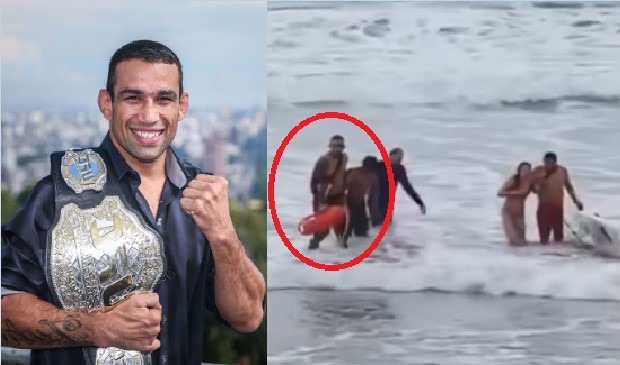 You might love him or hate him, support him or not but Fabricio Werdum, former UFC champion and Brazilian Jiu-Jitsu champion is saving lives. Today he saved two young lives of two teens on a beach near his home in California.

No matter of his struggle with doping problems today he proved he’s the real hero.

Ag Fight was the first to report the incident:

“We had been on the beach for almost an hour. When we saw the fireman’s car, the car stopped in front of us. I said I was going to help and Karine (wife) was in doubt because it was dangerous, but when I looked, they had two little heads in the sea shouting ‘help’. They were very far, about 70 meters in. When the lifeguard picked up the board alone, I took off my coat and ran off, “he recounted.

“After a brief conversation with the local security official, Werdum took a float and set off for the sea, where he rescued the drowning boy, while the young woman was taken off by the lifeboat. After the moment of heroism, the heavyweight was still recognized by some bathers and received several compliments and greetings from those present.“I took the orange buoy, I crossed it in the chest and I arrived with him, a little ahead still. I told him to get the girl, who was screaming a lot, and I got the boy, who was soft already. I was able to catch him and we went towards (the beach). Then, on the border, a gentleman helped me. (…) The waves were large, the guy sank some three times. Wow, the heart was the million, it’s an extreme situation, the heart goes to a million. It’s worse than fighting. It does not even come close, “concluded the fighter.”