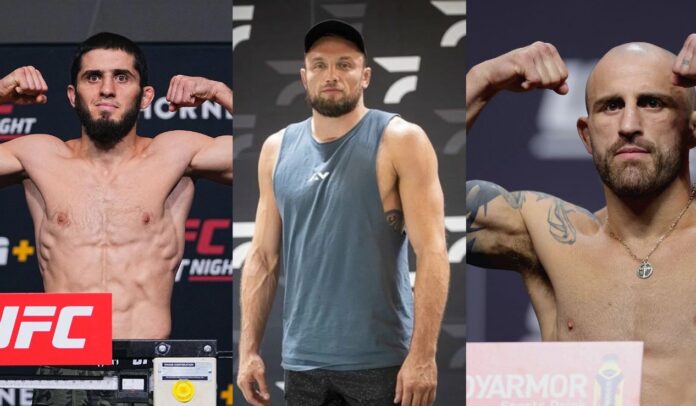 After Islam Makhachev comments that many black belts in JIu-Jitsu should be “canceled” Craig Jones, the grappling coach of Islam’s next opponent Alexander Volkanovski has come out to agree with Makhachev and delved deeper into the subject.

Craig Jones is one of the best grapplers in the world, or, if we’re being precise, keeps being the second-best grapplers with such efficiency, that his entire team is named “the B-Team”. He is the grappling coach of UFC featherweight champion Alexander Volkanovski and has something to say about BJJ black belts in MMA.

Islam Makhachev, the newly crowned lightweight UFC champion, and Sambo master, just took out one of the very best Brazilian Jiu-Jitsu black belts in the UFC when he choked out Charles Oliveira to win the lightweight belt.

After his victory, Makhachev commented on BJJ black belts in MMA, claiming that many black belts should be canceled because they have no actual skill.

“I think Makhachev’s grappling is superior to what a lot of the traditional jiu-jitsu guys did because they don’t know how to hold someone down. They have no idea how to do it. So we really got to reverse engineer what Makhachev’s doing, which I’ve been trying to do on talk, and I’m trying to teach these guys how to do it so I can practice doing it.

A lot of safe ways to get up, heists, switches. Obviously I’m working on it in open space. Volkanovski is already really good against the fence to get up, but obviously tough it’s very hard work to start in that deep of him.”

Jones also commented on Makhahchev’s statement that many black belts should be canceled:

“I honestly agree with what Makhachev says, a lot of people deserve to have that black belt taken away.

I kind of agree with that. I think what those guys are doing is sort of superior to what we’ve been doing for a long time because we built an entire sport around conceding bottom position.

And a lot of guys don’t mind being on bottom because they’ve never rolled with a guy that knows how to pass guard or pin someone, so don’t know how fatiguing horrible it is.

Everyone thinks they know to grapple until they come across a guy that really can pass well and then suddenly they think, s*it, I’d rather be standing. I’d rather be on top.”