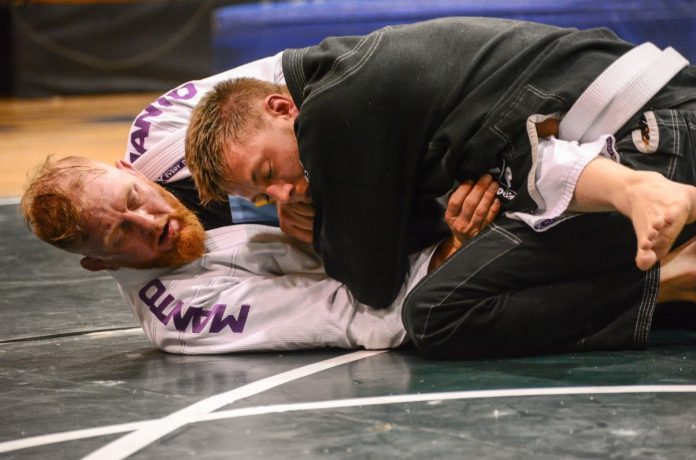 On Saturday, April 27th, Collegiate Jiu-Jitsu competition became a reality. Chris Martin, jiu-jitsu coach at Marquette University and head marketing officer of Nova Gyms in Milwaukee, with the support of the National Collegiate Wrestling Association, hosted the first-ever Collegiate Team Dual meet where Marquette students faced off against the Northern Illinois University Jiu Jitsu team. The competition, though new and unique, included features familiar to grappling fans of all persuasions.

The tournament format followed the popular submission-only ruleset with a 6-minute regulation round and a single EBI-style overtime round in the event of no submission victory during regulation. In perhaps the most interesting aspect to the ruleset, competitors were allowed the option to choose whether they wore a gi or rashguard and shorts. Martin referenced his love of the early UFC events as inspiration for the choice. “Early on in MMA”, he said, “You would see

Royce Gracie out there in a gi and there was no problem. Nobody forced you to wear anything specific, and it made for great matchups, so by allowing either gi or NoGi uniforms, it became a strategic choice. You could use your gi, but you could have it used against you. You could just wear a rashguard and shorts, but you have fewer tools.”

The first competition, reflecting the influence of the NCWA, was a true dual meet, where

teams of six faced off, each in his/her own weight class. Wins by submission offered higher point

values, and faster wins offer still higher rewards with a team champion being crowned based on total points won. Under this format, Marquette started slowly, losing the first 3 matches but rallying to an overall win of 30 points to Northern Illinois’ 21. Impressively, 8 of the 9 total matches held ended in submission, with only a single match decided by EBI overtime rules.

This first meet, establishing the Great Lakes Conference as the league’s first competitive region, was as much a pilot project as anything else. “It was about getting this off the ground”, said Martin. “Now we have a successful event under our belt, we can really help this thing take off.” The NCWA shares Martin’s passion and looks forward to increasing access to combat sports competitions at the collegiate level.

Martin now looks to move forward with additional tournaments, secure sponsorship, and bring in production, video streaming, and other features to help him appeal to the huge existing base of collegiate sports fans. He is also obviously looking to add teams to both the Great Lakes Conference and also establishes other regional affiliations. With the support of the NCWA, which supports nearly 200 programs across the US, that goal appears to be attainable.

If you are part of a college jiu-jitsu club or program and would like to get involved in this emerging league, contact Chris Martin at chris@novagyms.com.