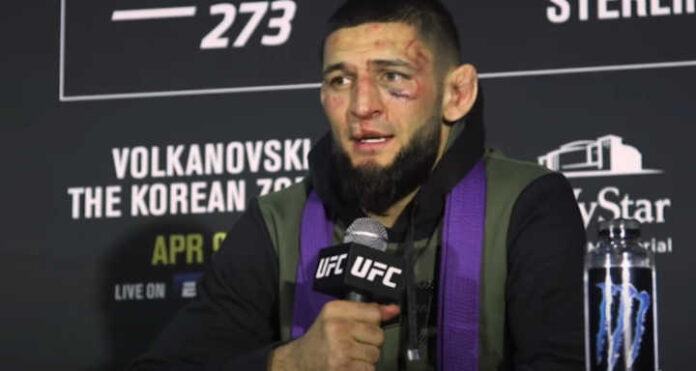 Since his debut in the martial arts world, Khamzat Chimaev (11-0, 5-0 UFC) has done extremely well outside of the Octagon and at home. His self-promotion has long been a part of his identity, and it features “trash talk” and arrogance towards opponents.

“Borz” had the most difficult fight of his career on Saturday. He faced Gilbert Burns at UFC 273, defeating him by a unanimous decision of the referees after an evenly contested bout. After a press conference, he decided to clarify all of the bad comments that have followed him since day one.

“I’ve been the bad guy,” Chimaev said. “To everybody else, it looks like I don’t respect these characters. This is all a game; you’re attempting to play with his head and make mistakes. I learn something from every one of them.”

“I have nothing but respect for all of my opponents.”- Khamzat added

He admitted that it was because of his family that he had some difficulty fighting Burns: ” It was actually very difficult to fight him (Burns) because I saw his children. They came up to me and asked me if I was fighting with their dad. I don’t need that s***. ”

”I don’t want to fight some dad, I need a killer like me. I need someone who doesn’t care about that, “Chimaev concluded.

Also, Khamzat Chimaev explained why he wears a BJJ Purple belt around his neck.

In a recent interview, Khamzat Chimaev said that his BJJ instructor will promote him to Purple Belt if he manages to submit Gilbert Burns.

Obviously, Chimaev didn’t submit Burns but he took him down a couple of times and he wasn’t in any real danger. That was enough for his coach to award him a purple belt after the fight.

Check out the full interview here: