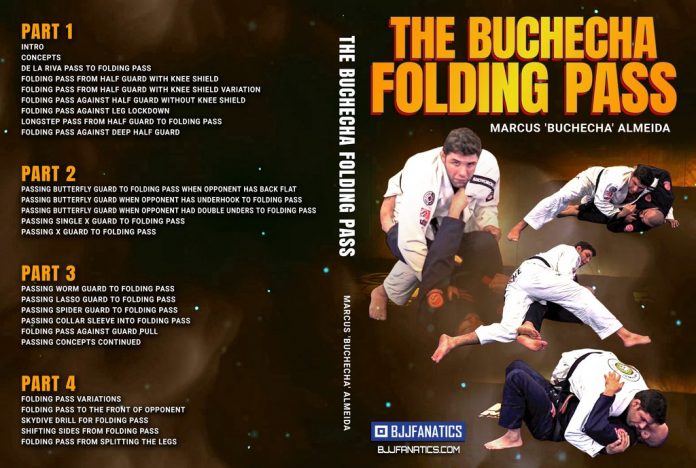 Buchecha is at it again! After a long period of inactivity (close to a decade) Marcus ‘Buichecha” Almeida is back again in the business of BJJ DVD Instructionals. initially, a couple of months ago, he produced a half guard DVD that we reviewed on this site. It was amazing, as expected. After all, the half guard Is Buchecha’s signature position. However, now he is back with yet another DVD set, and this time, he is showing stuff that we haven’t seen him teach a lot before. It is now time to explore some top game strategies with the brand new Buchecha Folding Pass DVD instructional. And, as usual, we have the very first review!

I’ve never really looked up to heavyweights much ween I was going through the ranks of Brazilian Jiu-Jitsu. As a featherweight, their game seemed distant and not really practical for my needs. However, when Buchecha came on the scene, guns blazing, and started taking legends out, I was intrigued. So I started looking into him and his one instructional at the time. It turned out that Buchecha is one of those ultra heavyweights that do not really move or grapple like heavyweights. Rather he is ultra-technical, extremely tactical and knows what works, and when.

As such, his initial instructional was a game-changer for me. Suffice to say, his previous new instructional, an updated version of his original one, was also immense. So, how could I not jump when I heard that the Buhcecha Folding Pass DVD was in the making? Luckily, I didn’t have to wait too long, and this is what I found inside it.

Buchecha has always been the good guy of Jiu-Jitsu, even though he took out some legendary people. His memories match against Roger is the stuff of legends. If there are ever BJJ bards going around singing hero songs, half of their stuff will certainly be about Buchecha. Still relatively young, BUchecha had a quiet period but is now booming back onto the big scene of grappling. However, the landscape has changed. And he is now no longer the top predator of the bunch. At least at the moment.

To be honest, Buchecha did have a fairly successful ADCC. He lost in the semi-finals of the +99kg division to eventual champion Kaynan Duarte. They then made it to the finals of the absolute and lost by the smallest of margin to double champion and BJJ prodigy, Gordon Ryan. In fact, it is young Ryan who has now taken over the mantle of GOAT, one held by Buchecha for quite the time.

There’s a clear reason why many people still consider Buhcehca to be the GOAT. In comparison, Ryan has won just a fraction of the things BUchecha has. However, he is of a different time and a different breed and has experience and titles in different championships. Still, a record of two ADCC heavyweight titles, 13 IBJJF world titles (6 times double gold in division an absolute), four NO-Gi world titles, double god at the 2012 Pans, as well as gold in the IBJJF Grand Prix and several UAEJJF Abu Dhabi Pro titles is always going to be hard to beat. By anyone.

There’s also the fact that he hasn’t really dabbled too much in submission-only tournaments, and we’d love to see him do it. I guess he has a lot to do in the future., but for now I’m more than content with the new Buchecha Folding Pass DVD.

When I think of Marcu “Buchecha” Almeida I immediately think of half guard and toe holds. He has done wonders from the bottom and has taken some great prizes thanks to his toe hold game. Oh,m and add to that his crazy double leg takedown. You know the one when you see him run through h an opponent across the length of the mats. However, I never really associate BUchecah with much of a top game. Probably because not many people can play guard against him effectively.

Well, suffice to say, he does have a top game and it is an impressive and extremely well-rounded one. His choice of passing, unsurprisingly for a heavyweight, is the folding pass. It is one of the passes I really love doing, particularly since I blew my knee out and knee slices went into history. Speaking of the folding pass, there are merely a handful of instructions on the subject. However, not one comes close to the Buchecha Folding Pass DVD, both in terms of length, and quality of information inside.

In technical terms, this I just another perfect Brazilian JIu-Jitsu instructional. As is the norm these days, I got four volumes, all organized according to BUchecha’s directions. The material is available in both DVD and digital, so this time, I opted for the second. You get an expres download, no hitches whatsoever, and the video quality is exemplary. Moreover, you get to learn from Marcus Almeida and learn stuff that not too many people know how to d correctly.

IN terms of specific content, the Buchecha Folding Pass DVD starts off with basic concepts and a half guard folding tactics in the very first volume. What follows is a masterclass on fold passing the butterfly guard, before BUchecha turns to famous lapel and collar guards and offers ways to destroy them. Finally, it is all about the technical aspects of the folding pass, form drills, and variations to match tactics. In other words, perfect organization, more than enough material to last you for months, and an unbeatable passing game.

Folding The Half Guard

As the instructional opens, Marcus coves a few basic concepts that make the folding pass work. The pass is simple, and tailor-made for competitors as ti is indeed a shortcut to get to mount or back. The best part is that you keep gathering points along the way. IN terms of actually passing, Buhcecha starts with a de La Riva Pass, before moving on to the half guard.

The one major problem with the half guard is that there are too many variations to count. That usually means there’s no universal pass to cover them all. Well, there is, and it is in the Buchecha Folding pass DVD. Almeida found a way to use the same pass against all half guard variations. Inside you’ll find routes past the knee shield, lockdown, deep half, underhook half, butterfly half… you name it. And they all work on the same principle, meaning all you need to learn is just that one folding pass.

This is probably one of the two volumes in this instructional you’ll be revisiting extremely often. When it comes to the modern game, particularly in No-Gi, the butterfly guard is the norm. In fact, it is the closed guard of the new generation. Conversely, passing it has become a major task for, everyone. The folding pass works perfectly, but you have to know how to set it up first.

BUchecha has things organized depending on the positioning of your opponent. If the opponent is on their back, you use one variation. IF they have one, or both underhooks, you also use the folding system but adjust accordingly to both situations. Also, you get to learn how to stop opponents from transitioning into common follow-ups, like X guard variations. And, even if they do, you can still fold – Buchecah demonstrates how.

The second part of this Buchecha Folding Pass DVD that you’ll be going back to regularly is this one. In the Gi, lapel guards are running rampant and causing all sorts of trouble. Once again, BUhcecha comes to the rescue offering a simple formula to shut the mall down.

First up for review si the worm guard. I guess Keenan is out of a job now, given that BUchecah solved not only his best worm guard but all possible follow-ups and variations. Keeping the worm guard company are the lasso, spider, and collar, and sleeve guard. Wrapping up volume three is a cool way to fold when someone pulls guards as well as several more passing concepts to put things into a practical perspective.

The Inner Workings Of The Folding Pass

Usually, people start off with the way a pass works before they head off to specific scenarios. In the Buchecha Folding Pass DVD, things are backward. And it is the perfect formula. In this last portion of the DVD, Buchecah goes into variations of the folding pass, as well as situations in which you can use it even though it seems like it is not applicable. IN fact, that’s’ why drills are for, and BUchecha has several lined up in this volume. My personal favorite out of the entire set is also in this portion – how to shift sides once you start fold passing.

BUchecha is, and will always remain one of the very best grapplers ever. I really love seeing him compete and I wish we’d see more of him on a more regular basis. However, I also do enjoy his instructionals, and this latest Buchecha Folding pass DVD is his best one yet. I’d love to see one on his takedown methodology as well, and even a dedicated toe hold DVD. Still, until they either compete or issue another DVD, I’m all set to experiment with the folding pass.