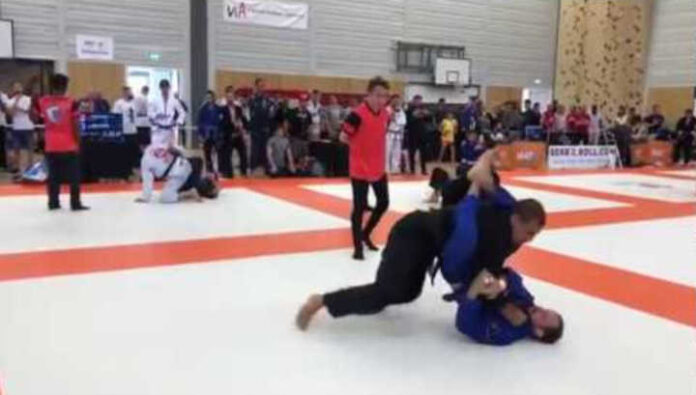 A gambit is a chess term that means “sacrificing a piece.” A gambit is when you sacrifice a piece in order to gain an advantage over your opponent in terms of structure or position.” – Explains Wim Deputter, Jiu-Jitsu Black Belt

Check out the video from this event where he uses his favorite triangle choke counter.

In this encounter, I use my right hand to take the opposing collar and leave my left arm low on purpose, knowing full well that my opponent has the choice of going for the triangle. Note that my head does not fall (straight neck). When my opponent attempts the triangle, he gains a POSITIONAL ADVANTAGE. But I gain a STRUCTURAL advantage.

My opponent’s back and neck are practically folded in on themselves (broken posture) while my spine and neck remain straight (strong posture). It’s difficult (and unhealthy for your spine) to build strength when you have a broken posture. Despite having the triangle, my opponent is unable to generate power since to his position and thus unable to finish the choke

I force my opponent to support my weight, gradually grinding on him until he crumbles. The more he attempts to fight me off, the quicker he becomes tired. He must either pass the ball or turtle up and expose his back (the truck) until he has no choice but to give in. My opponent effectively bent my neck (pulled my head down). If I correct my posture by arching my arse up over my shoulders. My neck is straightened once again. This identical technique and other things are fully described in BJJ Fanatics Instructional “The Hidden and Fundamental Mechanics of Pressure Passing.”