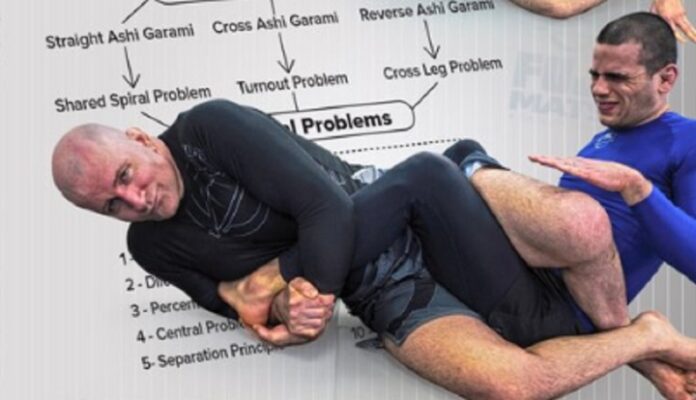 Let’s talk about modern BJJ. In fact, I have a better idea. Let’s talk about fusion BJJ. What is that now? Precisely. Fusion Jiu-Jitsu is what everyone is trying to do, but very few are succeeding at these days. All the attempts at putting together old school BJJ stuff with the moves that define modern Jiu-Jitsu, and a sprinkle of other grappling martial arts in there is what Fusion Jiu-Jitsu is all about. If we are being honest, we’re doing this on a daily basis, we’re just not aware of it. And it does require a shift in mindset. For example, do you only see Ashi Garami as a position for executing leg locks? Could there be another use for it, for example, as an Ashi Garami BJJ guard?

People are already starting to see the opportunities that the Ashi Garami BJJ position provides. As most grapplers wised up to leg locks (more or less), the defenses to heel hooks and kneebars are becoming stronger and stronger That still leaves the attacker in the Ashi Garami position though. Until now, we had one track mind – go for another leg lock. That is still an option, but so are sweeps and passes. We are now arriving at a moment where the Ashi Garami is turning into a position of control equal to that of a guard, rather than just a submission hunting sweet spot.

Let’s talk more about Fusion BJJ. We are at a point in time where Jiu-Jitsu is no longer Japanese or Brazilian. It is simply Jiu-Jitsu, plain and simple. As such, the evolution of the art has taken us to a direction nobody could have foreseen. In fact, there has even been resistance for a while to change the “old ways’ but luckily, it did not prevail. How could it, when Jiu-Jitsu is not some ancient art that has been done for centuries and it would be an insult to some long-dead grandmasters to try and do a move differently, even if logic dictates you do so.

When you enter a BJJ gym nowadays, you will see as many different styles as there are people on the mats. Even in world-class competition dens, where people have inclinations towards certain areas, you can notice that different competitors do the same moves in a very different way. That is what Jiu-Jitsu is all about – letting people express their individuality. And there’s no better way to express yourself than when you have at your disposal everything the art/sport has to offer. And that includes both the old school stuff and the modern innovations that have defined Jiu-Jitsu in the last decade.

When it comes to fusion, you are encouraged to mix everything together, as long as it makes sense. For example, there’s no need to bicker over whether or not you should use Gi or No-Gi grips – use them both as you’re progressing through something. The ASh iGarami BJJ position, seen as guard is the perfect example. In leg locking, you wouldn’t really think about Gi grips, but you would do them if you are in a similar position but you perceive it as a guard. Why not fuse everything together to optimize the outcome? 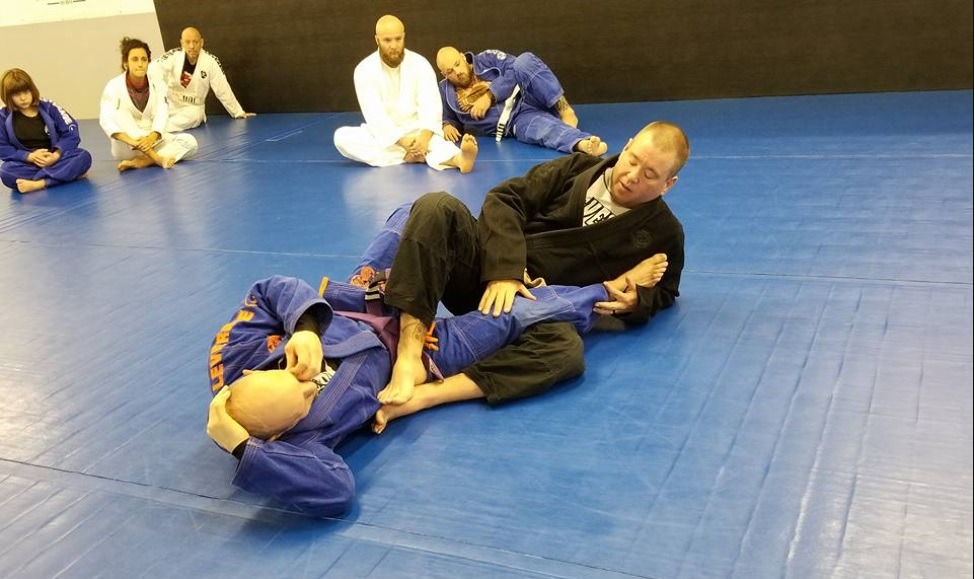 The Case For The Ashi Garami BJJ Guard

The only reason I need to present the case for the Ashi Garami BJJ guard is that people usually do not perceive the position as a guard. When you analyze it and break it down a bit, you will see that the Ashi Garami actually offers more than any other guard in BJJ does.

What defines a guard in Brazilian Jiu-Jitsu? One person needs to be on the bottom and the other on top. If the bottom person has their legs in between themselves and the top person, they are in guard, regardless of the specific configuration of the limbs. Universally speaking, this is the BJJ guard, and there are, as we know, countless variations of it.

Going further, what are our options from the guard? You have two, if we are being honest – sweep to get on top (for points) or submit and finish the job then and there. There are no other offensive options that the guard offers. In addition, to be able to execute either of those, you will need to control the position and know how to stay in it when the top person inevitably tries to get past your legs (pass).

Where does Ashi Garami fit in the story? Well, to begin with, you have you in between you and your opponent – the definition of the guard. Now, it gets blurry when it comes to the top and bottom person sometimes, but that is the good thing. Playing the Ashi Garami BJJ guard provides you with an additional option apart from the sweep and submit – you can directly pass. And this is before I even mention the higher level of control and the myriad of transitional attacks that stem from the position.  Interested yet? 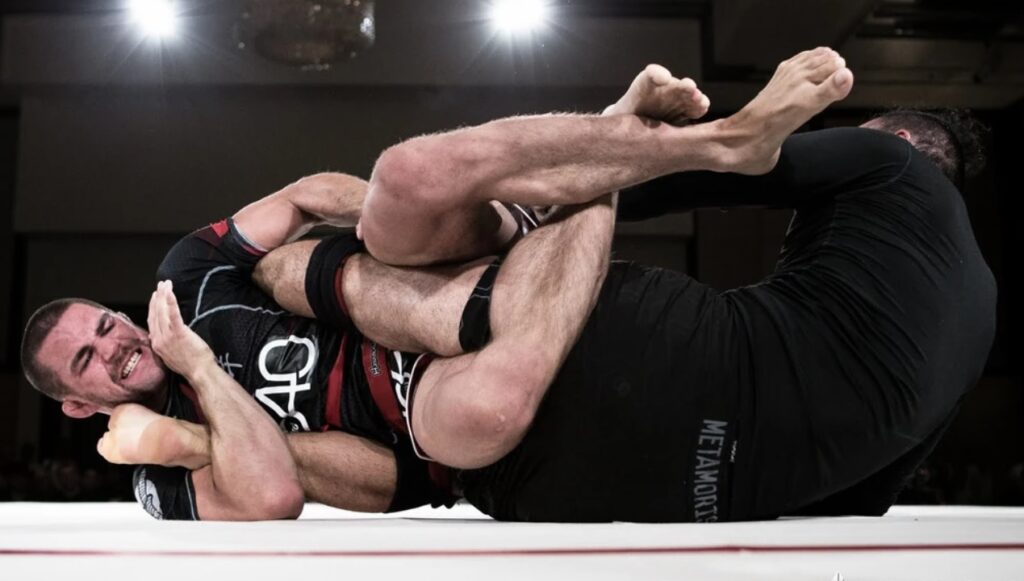 The Perfect Guard For Competitors?

Let’s talk about the applications of the Ashi Garami BJJ guard. The one area in which you can really reap the benefits from this fusion Jiu-Jitsu approach is competition. seeing the Ashi Garami as a guard is a logical step for competitors – you already use it anyway. The Single Leg X Guard and the 50/50, for example, are just a couple of micro-adjustments (pun intended) away from their use as Ashi Garami variations.

IN that context, what I find the most unique about the Ashi Garami BJJ guard si that the person you’re looking to control and attack with it doesn’t necessarily have to be on top. It is perfectly okay if they are on their butt – you’re close to sweeping the way. That said, apart from the 50/50 and the Singel leg X, or the outside Senkaku and Irimi Ashi Garami, in leg locking terms, you also have other variations to use as guards. There’s the Inside Ashi Garami in the form of the Inside Senkaku and the Game Over position. Inside Senkaku is actually legal for everyone, with certain things to look out for when it comes to attacking the legs. If you do it on a standing opponent, though, it will be considered illegal.

From any given Ashi Garami BJJ position you have the option of playing around with positioning and grips to actually increase control and use the position as a guard. Since you’re controlling at least one leg anyway, there’s really no way for an opponent to pass your guard, because they will need both of their legs to do so. Moreover, given that their hips are often on the ground, you can not just get top position, but use the fact that you have inside control and a leg to go straight past their legs and inside control, mount or the back.

The back actually presents itself easier than in any other guard when people try and get out of an Ashi Garami. If you’re not only dead set on heel hooks you’ll notice so many high-percentage options from the position!

Fusing the Ashi Garami BJJ position and BJJ guards is just one example of how the old and the new school of Jiu-Jitsu can come together and give birth to something really powerful and potent. Now imagine if we apply the fusion mindset to Gi, No-gi, old, new, wrestling, sambo, etc. That is the direction in which Jiu-Jitsu is bound to grow, and the sheer number of options we can mesa round with is enticing, to say the least!