Jimmy Flick had an incredible debut at the UFC. In his first match, he lands an amazing flying triangle choke in the first round of the match, at the UFC Vegas 17.

The men’s flyweight division gave us another great fight. Jimmy Flick made his UFC debut at the UFC Vegas 17. Jimmy Flick faced Cody Duren. At the beginning of the match, Flick had some struggles against Duren on the feet. But then Flick threw his right leg up, Duren caught the kick but that allowed Flick to jump into the flying triangle. Duren’s attempt to escape was unsuccessful. He tapped out at the 3:18 mark in the first round.
Amazing submission, and for sure this could be the candidate for the Submission of the Year.
Flick did a great job. This is his fourth match this year, and he won all of them by submission. He improves his record to 16-5 (1-0 in the UFC).
Also, he got the award for Performance of the Night. 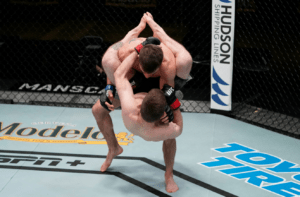 Jimmy is a Black Belt in Brazilian Jiu-Jitsu, once again he proved how much his ground game is dangerous.
This was the third the 3rd flying triangle submission in UFC history. The first two belong to Pablo Garza and Godofredo Pepey.

In the post-fight interview Jimmy said:
“I’m a Brazilian Jiu-Jitsu Black belt, I love giving my leg and usually throwing a flying triangle, and as an amateur, I threw up a head kick before and got the flying triangle and it just comes naturally to me. I’m a finisher and that’s what I like to do and it doesn’t matter if I’m jumping for submissions or I’m on top looking for submissions, I’m looking for the finish at all times.”