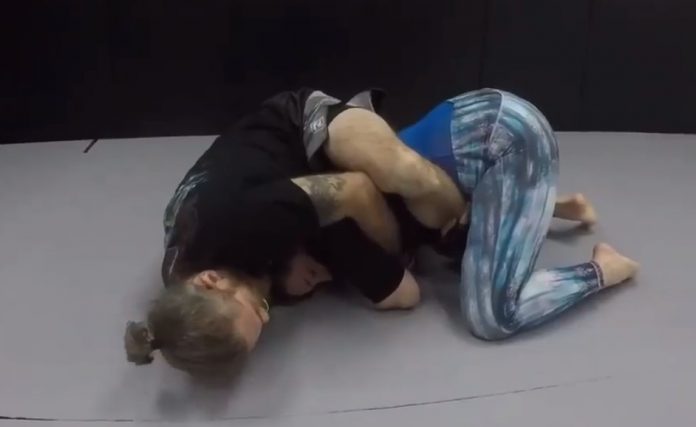 As a reminder. In early December Kristopher Zylinski started posting how women are slow and weaker than man and they wouldn’t stand a chance against a man in an MMA fight.

“99% of women are too weak and lack the reflexes ro do enough damage to stop 99% of men. Even if they knew BJJ they just don’t have the size or strength to use the holds. It’s dangerous to teach any woman to try and strike or fight a man. Just my 2 cents.”

While it is true that men have stronger upper body and reflexes than women on average Kris pointed out that there is a small chance of some women winning against men.

Kristopher Zylinski was also writing about his opinion on women training some Martial arts and self-defense martial arts.

“On a side note, reality note, if you teach women to try and fight a man off, you are giving delusional thoughts to them. The only way a woman will successfully defend herself against a man in most types of situations is with a gun. And if she gets confronted by a man her first reaction should be to try and get her gun. If he grabs her, her first reaction should still be to try and get her gun. There is no scenario in any situation where she should try and fight him instead of trying to get her gun. That is the point.”

After his words, McDojolife Facebook page was looking for a Female MMA Pro fighter. The first female MMA fighter was Anna Dempster.
Anna Dempster jumped in to show to Kristopher Zylinski that her MMA training and her MMA amateur fights worths a lot. Much more than Kristopher Zylinski Thinks. But, Anna got injured. And she was replaced by Sarah Patterson.

With a Pro MMA Record of 5-3-0, Sarah was ready to fight Internet Troll Kristopher Zylinski but as she got injured. Just like Anna Dempster, she suffered an eye injury and she was out.

That’s when Tara LaRosa Jumped in to fight Internet Troll Kristopher Zylinski.
Tara LaRosa as a PRO Female MMA fighter with a score of 22-5 is a former and first BodogFight Bantamweight, 135 lbs, Champion. She’s also a Purple belt in Brazilian jiu-jitsu under Royce Gracie and a Brown belt in judo.

Tara La Rosa jumped in to prove to Kristopher that Woman vs Man makes sense. And especially if it’s a fight of MMA Trained Woman vs Untrained Man like Kristopher is. After Tara was picked to fight Kristopher she wrote on her Facebook profile:

“A friend tagged me in on the search for a replacement and I responded as a joke… well, I guess shit got real, so here I am! I feel like I should say something like “hey, hold my beer for a second” or “Hey Y’all, watch this” in my best redneck accent. It fits. I’m a part redneck. So, I guess… here we go!”

“If you don’t know me, I’ve been training in martial arts since 1995. I got into Shotokan karate in hs and then got involved with Judo in college. I placed 2nd at collegiate nationals in 2001. Shortly after, I started training in Brazilian Jiu-Jitsu and MMA (which was referred to as NHB back then).
I had one amateur fight and my mom got scared, and said you’re moving with you’re auntie and uncle in Bel-Aire… wait no, that was Fresh Prince.”

“So I had an army fight Nov 2001, then went pro in April 2002. I’ve been training and fighting ever since.
If you want more, check the wiki. Also, I’m on twitch almost every weekday from 2:30-5: 30 pm, so come in and ask me anything! Follow me on Twitter for better interaction, I’m not very good at FB lol
Welp, that’s me! …so, here goes nothin’!”

While there were many speculations about Kristopher’s training we managed to ask him if he has any Martial Arts training in his life. Here is what he answered to us:

“I have never paid anyone to teach me fighting. I’ve watched boxing since I was 5 and boxed when I was 19. Again I never trained in a gym. I also roll with friends but again no formal training. I do watch MMA about 6 hours a day. I simply believe in my eyes and my abilities than I can beat Tara LaRosa. Not cause I’m a man, not cause she is a woman, but I have unconditional belief in myself.”

The fight against Tara LaRosa and Kristopher Zylinski that was scheduled for January 6, was canceled just an hour before the bout was expected to begin. According to McDojlife, Kristopher Zylinski and TaraLarosa the State Athletic Commission arrived at the venue along with the police and shut down the fight or “sparring” as they were calling it.

And, today, it Happened. Enjoy