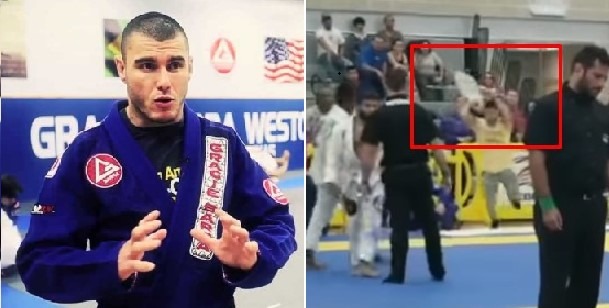 As far as we can see IBJJF Austin 2018 was very “interesting” event. First, we had a guy knocking out his opponent with a suplex and now we have a BJJ instructor throwing a chair on the competitor.
Gracie Barra Black Belt Ulpiano Malachias is the owner and head Instructor at Gracie Barra Westchase in Huston.

As we can see in a video he went crazy after his BJJ White Belt student lost a match in final seconds via takedown.

The guy who took a win flexed and probably said something pointing to Ulpiano Malachias. That was enough for Ulpiano to jump over the barricade rushing toward BJJ White Belt who was celebrating at that moment. On his way, he took a chair and threw it at the poor guy. That wasn’t enough for Ulpiano as he charged the guy pushing him with both hands.

It will be interesting to see what’s going to happen with Ulpiano Malachias after this as he’s representing Gracie Barra.

From a video below we can’t see some real reason on why he did it or what provoked him to attack a white belt like this. It seems like everything was clear in this situation. As soon as we find out more details we’ll update this article.

What would you do in this situation if you’re celebrating and someone throws a chair on you and rash towards you?

Ulpiano wrote an answer and an “apology” to the situation that took place at IBJJF Austin Open on his Instagram profile. 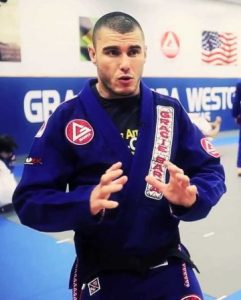 “I am posting this in response to the incident at Austin IBJJ Open:
First, I would like to apologize to the IBJJF which I’ve been a member of for over 20 years, longer than most people who even attended the Austin open this year. I never had one misconduct at any tournament. Second, to my team Gracie Barra and my students because as a professor I should Hold the standards of my team and my colleagues higher.
Besides the fact that I’m a Black belt professor and need to lead by example I am a man and father and when someone (especially a white belt at a tournament) calls me a MOFO multiple times and me off it’s hard to not react on the moment. The video that was posted doesn’t show everything and was majorly edited to make me look like I was not instigated and I just went crazy for no reason or because of the loss of the match. When in reality, my reaction had nothing to do with the result of the match.
The kid was talking trash leading up to the tournament and during the tournament and then after the match while he was inside the ring he stood up looked for me, flipped me off and called me a MOFO.
So the disrespect was mutual and started with him. Doesn’t make what I did “RIGHT” but every story has 2 sides and what was posted social media only show his side.
As most people know that every time that team have a chance to play the victim they will do it.
I hope his professor teaches his students how to respect black belts and their sport one day.” 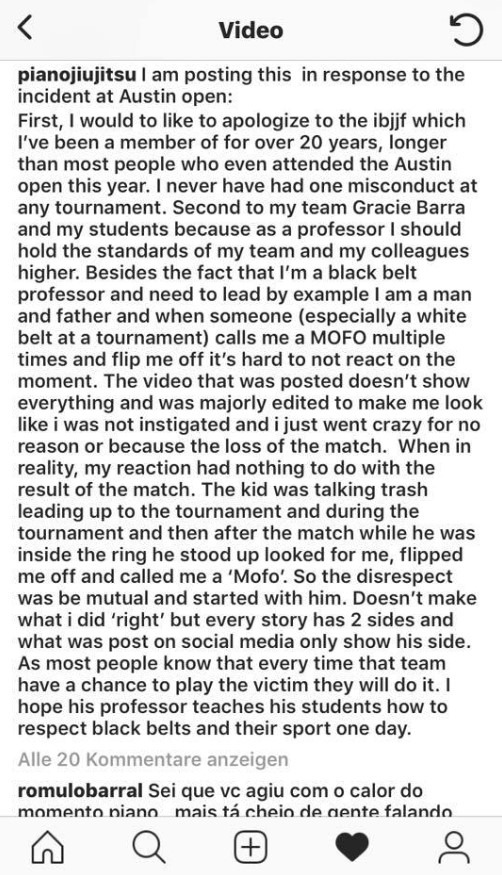