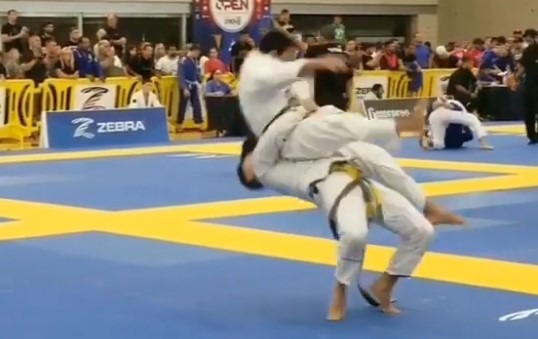 At IBJJF Austin BJJ Tournaments, something pretty weird happened. BJJ Brown Belt with a nickname @kody_steelebjj on Instagram did a suplex takedown. He was losing the match and last 10 seconds he decided to suplex a guy making him unconscious. Suplex of this kind is illegal at IBJJF tournaments and in the most BJJ tournaments around the world.

Here are some of the comments on his Instagram account from people that are pretty disgusted with what he did here:

“Stupid fucker… No spirit of sportsmanship. Do you realize that you could have intentional paralyzed a man? Then what happens to these kids and family. You are such a fool. I don’t care what he did, you are very stupid”

“Were you heated? Nervous? Mad? It’s a nice takedown but you had so many other options from that body lock… did u just want to injure him or didn’t really care about winning? I’m confused what takes….”

“Shitty that a brown belt that knows better did this shit. Could’ve hurt the dude. It’s one thing to hit a suplex in a contest where people should prep for it, it’s another to do it in an IBJJF comp. Stupid”

“Dude…you are a brown belt….you should know the rules by now..”

“Brah stop playing you know this shit is illegal.”

“Revisit your actions when you grow up.”

“Dude, I was just behind the scorer when this happened. Even in your own video, you can see you just walked away, not looking at him. He was out. He opened his eyes before the medic got to him, but dude was reset right after his head hit the mat. I’ve got no skin in this game. You’re not in my gym and neither was your opponent so I don’t have to care about either of your reputations. I’m just giving the eyewitness details from the perspective of the objective third party observer. Hopefully next time you will check the IBJJF rule book before you hurt someone again.”

He, @kody_steelebjj did answer to everyone judging him:

“I wasn’t mad at all. I was competing with a really tough competitor and he defended my takedowns from the back earlier in the match from that position. I was down 1 advantage 10 seconds left and heat of the moment just reacted. Wrestled freestyle before jiu-jitsu and that’s how we score when the opportunity is there. Nothing but respect for my opponent”

Is it possible that this Brown Belt don’t know the rules? Do you think that he did this on purpose just because he’s losing? What’s your opinion about this move?

Here is a video of that suplex posted by a guy who did it with words: “Got this winning takedown at the last 10 seconds of the match but Unfortunately I got disqualified after so I ended up taking 3rd today for the gi. Tomorrow no gi let’s get it!”

Got this wining takedown at the last 10 seconds of the match but Unfortunately i got disqualified after so I ended up taking 3rd today for the gi. Tomorrow no gi let’s get it! #checkmat #archetype #archetypebjj #teamarchetype #atx #bjj #bjjlifestyle #wrestling