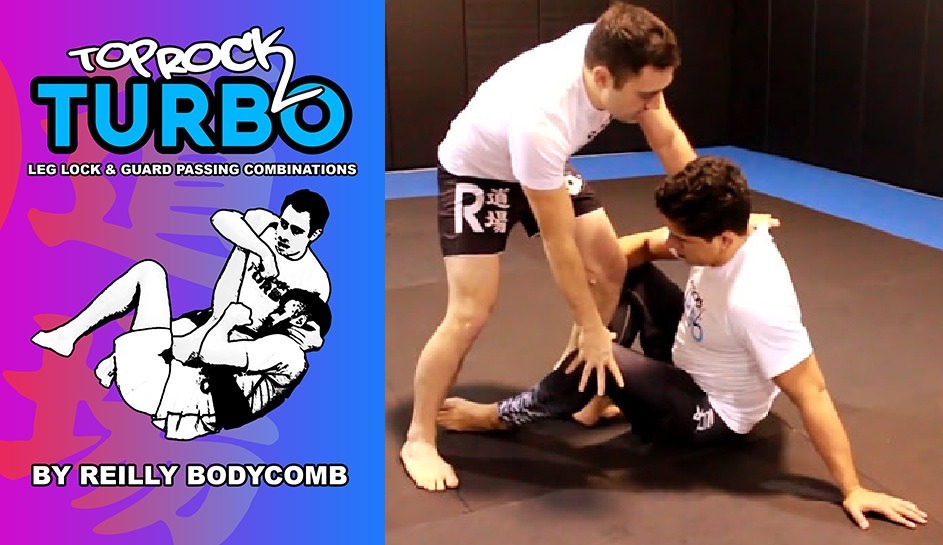 Back in the early days of BJJ, when a bunch of Oswaldo Fadda’s guys beats a bunch of Gracie students via leg locks, a huge part of BJJ was swept under a carpet. Leg locks got the bad rep of being a cheaters way to victory for people who couldn’t pass the guard. The modern JIu-Jitsu game has seen leg locks rise to power, mostly though, as attacks from bottom positions. When it comes to the top, people usually think in terms of either passing or leg locking. Well, what if I told you that you can actually do both? That’s exactly what you get in The Top Rock Turbo DVD by Reilly Bodycomb.

While Brazilian Jiu-Jitsu is more than catching up to the leg locking prowess of Sambo and perhaps catch wrestling it still has a long way to go. Granted, modern BJJ leg locking systems are far better than anything Sambo, Judo or any grappling martial art has to offer. However, the fact that these arts have been using leg locks for much longer gives them the edge. Reilly Bodycomob, for example, is one of the best leg lockers in existence. Why? Because he blends BJ and Sambo to perfection and doesn’t allow to be restrained in his approach. His top Rock Turbo DVD is the best proof of concept when it comes to his take on leg locking.

People in BJJ always talk stuff they do not actually adhere to. If there’s one idiosyncrasy about the sport, for me, it is definitely this. People preach respect, yet thrash talking is the norm. Moreover, everyone says leave your ego at the door, and then they hit you with their own oversized egos. I could go on and on, but there’s a point in here somewhere. In terms of the growth of BJJ, we claim to be open to outside influences yet rarely take them seriously. Sambo and catch wrestling moves are great examples. 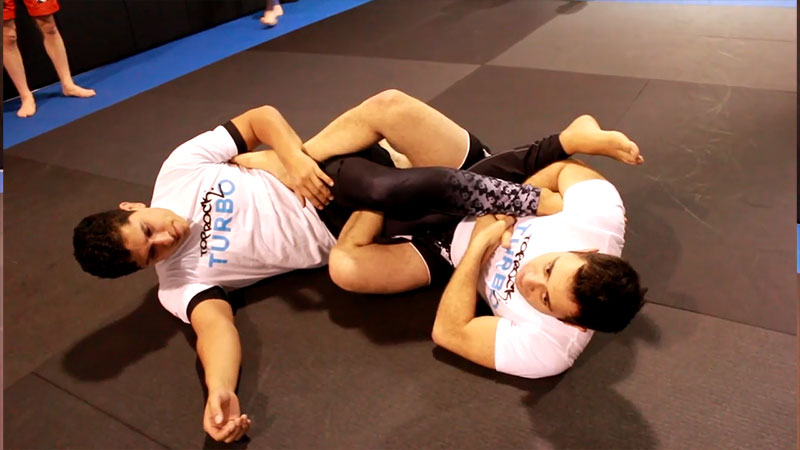 Luckily, there are people out there that have a different way of thinking. Reilly Bodycomb is an American Sambo champion and overall badass grappler. He perfected Sambo over a period of over two decades. Moreover, he did so training under a legend in the sport, Stephen Koepfer. Bodycomb did his fair share of Sambo competition, even fighting in the FIAS Sambo World Cup in Russia ten years ago. Normally as BJJ started to become the dominant grappling martial art, Reilly Bodycomb switched his attention.

As one of the best American Sambo masters, Bodycomb didn’t have to start from scratch in BJJ. IN fact, he is a No-Gi grappler per se, able to blend Jiu-JItsu and SMabo in a way we’ve never seen before. Moreover, he is a huge fan of leg locks, something that makes him a grappling celebrity of sorts nowadays. What you need to know is that his stuff works, and he is one of the best teachers in the grappling martial arts period. The Top Rock Turbo DVD is far from his first instructional, but it does cover a hugely important subject in a very unique manner.

The whole hype about the top Rock Turbo DVD by Reilly Bodycomb is due to the fact that it is a leg locking instructional that covers leg locks from top positions. More precisely it covers ways of using guard passes to get leg locks. Unlike most instructions of today, it is not just a passing or leg locking one. Instead, this DVD offers different ways of blending everything together so that you can change between passing and leg locks. Furthermore, it even covers hitting leg locks from top positions after you pass. Oh, and worry not – you won’t be giving away points by looking for kneebars and heel hooks from the top.

This DVD instructional is simple and powerful. In essence, you can pick it up, give it a watch and start performing the moves immediately. Watch it a few times over and you’ll have a foolproof concept of top position leg attacks. Reilly’s teaching style is as unique as his grappling one. He likes to use both broad and precise concepts to explain things and back it all up with plenty of straightforward examples. Moreover, he is really easy to listen to and doesn’t dwell on needless points. Plus, the way this DVD is set up means you start easy and progress to more advanced stuff. Bodycomb likes to build his advanced attacks on the foundation of core simple ones.

The instructional covers several different topics, arranged in a particular order. Namely, the very first area is the leg drag pass position. From there, you get both passing and submission options. Furthermore, the signature “Top Rock” system of Bodycomb is split into a low and high one. Finally, some crazy mount attacks that involve leg locks make sure the instructional has a spectacular ending.

When it comes to leg drags, BJJ people immediately think back attacks. That’s all great and it actually is the ideal solution. However, the person on the bottom also know that and it may not be as easy as you think. The other option is actually passing to side control. Well, there’s a third option as well now, and that’s going for leg locks. How you get to the leg drag is down to you., although Reilly Bodycomb does share some interesting entries.

Opening the submission chains form here is an inside heel hook. Whenever you end up short on a leg drag, or the opponent switches hips successfully, you end up losing the position. If you like to do leg locks though, you actually gain one. There’s a wicked inside heel hook setup right here that either gets you to tap or gets you straight back to a deep leg drag. Also featuring here is a great and perfectly legal ankle lock form the leg drag. Covering all angels, Reilly also offers a leg lock solution to the issue of turtling up. This one is by far my favorite set up from the Top Rock turbo DVD.  An extremely good tripod ankle lock against inverting escapes completes this portion f the DVD.

Both the high and low top rock positions work from another classic passing position – the long step (or backstep) pass. In recent years, we’ve seen it open up leg locks on a regular basis, but never quite like this. In fact, Reilly’s system accentuates both the passing and leg locking opportunities from the position. That said, Bodycomb goes deep into the backstep as both a movement and a position before heading off to leg locks.

In terms of the high vs. low top rock, it is all about whether you’re standing or on your knees. The Top Rock movement is actually a specific move you do to rock your opponent so that you end up in a top leg locking position. This is what makes the Top Rock Turbo DVD so different from others. It teaches you to to stay on top while attacking leg locks. Attacks include inside heel hooks from the honey hole as well as some wicked Smabo kneebars.

The low top rock once again works of a back-step like position, however lower. It may be setup on its own or a way to get back to the position if an opponent tries s to counter your High Top Rock. A bunch of foot locks provides even more submission options here. Also form the low top rock there a great sequence called “the footloose”, which covers some smooth transitions into either knee on belly or tighter Ashi Garami positions.

Leg Locks From The Mount?

The final portion of this instructional covers the craziest leg lock setups you’ll ever see. They’re not crazy in the sense of being fancy and overly complicated, but in terms of starting position. Knee on belly and mount, for example, are not position you often associate with leg locks. Well, Reilly’s take on it, particularly the “Vegan Mount” is going to change that perception. Reilly Bodycomb figured out the best ways of getting leg locks from any top position, without losing it. The knee on belly setups is by far some of the most useful attacks from that position in the history of grappling.

As a bonus, you also get some X-pass wisdom, as well as a few other bonus moves. A perfect one is a flow, which actually puts all of the stuff together, starting from the leg drag and ending with the back pass and vegan mount. Finally, there’s also a headlock transition to really offer you a well-rounded system.

I’ve always enjoyed Reilly Bodycomb’s instructionals. In fact, this is his second take on the top Rock, and I have to say, it is miles better than the first one. That just shows that Bodycomb’s game is always evolving and he is working relentlessly on new stuff. The top Rock Turbo DVD is the best possible resource for people trying to find that elusive connection between leg locks and guard passes.