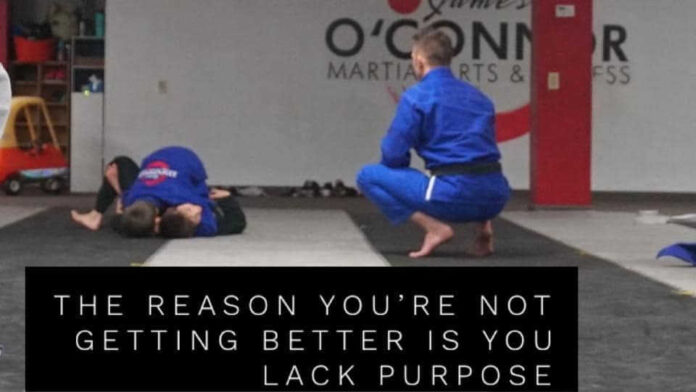 Way back when Malcolm Gladwell wrote his book ‘Outliers’ he said you need 10,000 hours of training to master a craft. More importantly 10,000 Purposeful hours.

Purposeful, meaning you’re not just showing up. You are grinding out the hours with a specific intent behind acquiring your skill. Be mindful and deliberate with your training.

Not just coming to JiuJitsu and flow rolling to see what happens. There is a time and place for that. So don’t think I disagree with Flow Rolling.

When you come to class you should have a specific intent or Purpose each and every time you step on the mat for maximum growth.

It’s ok to do the lesson of the day or go with the curriculum, but at the end of the session when your instructor says ‘are there any questions about anything else’ this is when you should be asking! Sharpen your saw. Have a Specific Purpose for each and every class you attend.

When it’s time to roll live you should have a specific goal in mind, not just see where this roll takes you. Have a goal in mind you want to achieve every roll, and it could be different from person to person.

If you’re a Blue Belt it’s not reasonable to have the same goal when you Roll with a Black Belt as you do with a White Belt. It might be surviving vs. a new Sweep you want to pull off.

Personally, at Purple Belt, my mission was to catch 12 Triangle chokes each time I rolled live in a 60-minute session. In fact, it was written on my fridge at home so I could see it every day. I wanted 12 clean Triangle Submissions every time.

I was obsessed with setups, making my finish cleaner, watching YouTube, mimicking Ryan Hall at the time because he had a phenomenal Triangle Choke, all purposeful thoughts, and actions.

It was a question I would ask Braulio Estima when I did a Private lesson with him. How do I make my triangle choke better? It’s what I would hunt in tournaments when I competed.
It was my only Purpose.

And guess what, everybody in the gym knew To watch out for my Triangle Choke. When I would win at a tournament it was often with the Triangle choke. The formula works.

Again it was my intent when I went to train, look for the triangle. After I understood this my whole JiuJitsu journey made so much more sense.

I would switch techniques, submissions, or sweeps, but I always had a Purpose. It is a formula I use again and again. Become single-minded in my training for at least 3 months on a single move or concept.

I know the first week or two will be rough. I might have zero victories with it. I might fail and get passed and smashed while working on a new technique. But, by week 3 some success shows itself. By week 4 I finally start getting it consistently. I understood it just goes this way and tried not to be disappointed the first couple of weeks.

This kind of training is where you will make giant leaps. Warning ⚠️ it’s painful at first because there is bound to be a lot of failures. If you can stick through the first part though I promise you will see such huge improvements that your passion for training will reignite.

In fact, I’m going through another reigniting now studying the guillotine and guillotine escapes!

10,000 hours is so daunting to think about, in fact When you do the math, if you’re lucky enough to train 3 hours a day 7 days a week it only takes 10 years to reach Mastery 🤣 good luck With that!!

At the end of the day, You don’t have to train this way. Take it or leave it. It’s simply one success formula in JiuJitsu.