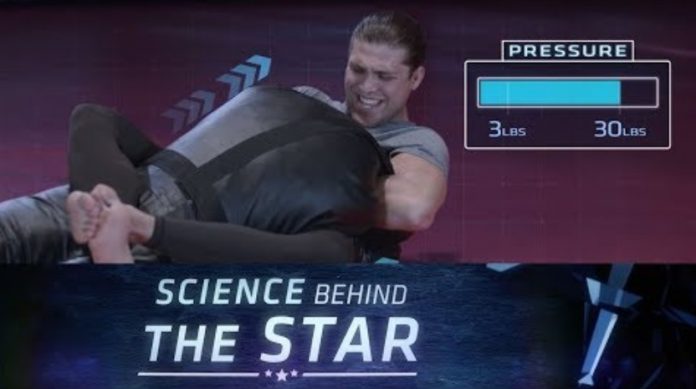 In the UFC Performance Institute, they were examining submission skills of Brian Ortega. Specifically his chokes.

There are two phases of this examination. They took a look at the high level of technique that Brian Possesses as well as forces that Brian can produce.

The first submission that is tested is Triangle choke. The first pressure point of the triangle is hips and the second are the knees. In this Brian’s signature submission he managed to produce 425 lbs of force. Which is a bit less than a bite of the wolf, which is 500 lbs.

The next submission they were examining was Brian Ortega’s Guillotine Choke. Brian successfully utilized two guillotine chokes in his UFC career. One against Cub Swanson and another against Renato Moicano.

Brian Ortega was able to produce 365 LBS of force. To put that in context, Ne England Patriot’s tackle man Marcus Cannon is 335 lbs. So, 365 lbs that Brian Ortega produce is basically the equivalent of an offensive liniment Marcus Cannon standing on your throat.

So, the interesting thing about choking techniques is not about how much force you can produce. It’s more often the direction of where the choke is held. There are needed only around 3-30 lbs to keep it for 10 seconds to render your opponent unconscious.

So what these results demonstrate is that Brian is one of the scariest submission martial artists in the UFC today.