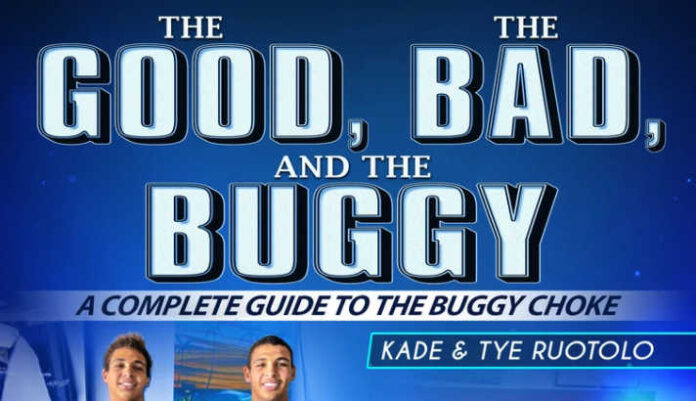 A couple of years ago, a mention of the Ruotolo twins in the BJJ world was nothing special outside of the Atos circles. After ADCC 2019, the names Tye and Kade Ruotolo became just as well known in the Jiu-Jitsu community as the names of Gordon Ryan or Andre Galvao. Now, you can take a look at the twins’ very own buggy choke BJJ DVD instructional.

The Buggy choke JJ submission is the focus of this instructional, as is evident from the title. What might be less evident from the get-go, though, is what the choke is. The Buggy is one of the sneakiest chokes in Jiu-Jitsu, given that it is best set up when in bottom side control. Cruel and unusual, this choke puts people to sleep without them even being aware they are in danger.

The Ruotolo twins, Tye and Kade, provide a complete guide to the submission with setups, finishing mechanics, and follow-ups. The DVD contains two volumes.

The Ruotolo twins have been involved with Brazilian Jiu-Jitsu from the early age of 3. Born in Hawaii in 2003, their parents enlisted them In Cleber Luciano’s school in 2006, after moving to Huntington Beach, CA.

The brothers started making waves in the children’s divisions, being so proficient in a competition that they earned an RVCA sponsorship at the age of only 10. In 2013, Tye and Kade moved to the Art of Jiu-Jitsu Academy led by another famous grappling brothers duo – the Rafa and Gui Mendes. As expected, their skills skyrocketed from there, eventually landing them at Andre Galvao’s Atos team in San Diego (then affiliated with AOJ).

The twins first came on people’s radar at the 2018 East and West Coast Trials. Tye got to the semifinals in the East Coast trials, beating many established professional grapplers at the age of 15. While neither of the twins won a direct placement in the main ADCC event, they gathered enough attention to get Tye an invite.

Aged 16 and “only” a blue belt, Tye managed to beat Bruno Frazatto and Pablo Mantovani to get to the semi-finals, where he lost to Kenedi Maciel. That earned him a third-place match against none other than Paulo Miyao, another half of a famous BJJ brothers duo. Tye narrowly lost on points, after catching Miyao in one of the tightest kneebars you’ll ever see… but Paulo did not tap and got the win, despite limping away.

That match put the Rutolo twins firmly on the radar, and they just kept building on their legacy in future matches. The wins for their black belts from Andre Galvao in December of 2021.

The unorthodox buggy choke is a crazy submission that you can pull off when you’re stuck in bottom side control, with your back on the ground. The choke is essentially a triangle, only done with your entire body, rather than just your arms or legs. The Ruotolo twins cover the many intricate ways in which you can set this choke up and finish it.

The Good, The Bad And The  Buggy Choke BJJ DVD  is a no-gi instructional that explores every aspect of this shiny new submission hold, presenting it in a way that requires no special flexibility or other athletic abilities.

The twins go over entires, finishing details, combos with other submissions as well as troubleshooting pointers.

While this choke is not a simple one from a mechanical standpoint it see extremely effective. The reasons for that are twofold – one, nobody is expecting it from a controlling top position like the side mount. Two, you can teach it to someone just walking through the doors by showing them the steps, and they’ll pick it up in one training session.

Not many submission holds in Brazilian Jiu-Jitsu is this versatile and effective. A weak side to the buggy choke is that if the top person expects it, it may be hard to get. There’s also the condition of the top person being in a certain side control configuration in terms of their limbs and angle relative to your torso.

I’d say that this DVD is for everyone, regardless of their affinity towards gi or no-Gi and/or their belt level.

The instructional has 2 volumes, each containing 4-5 chapters. The Ruotolo twins work together in presenting the material. their English is flawless, given that they were born in the US. Both volumes last around 20 minutes each.

Available in both DVD format and as a digital download, this DVD is shot in 4k quality. The camerawork, audio and video aspects of the instructional are also up to the golden standard set by BJJ fanatics.

The first volume starts with an intro that allows the Ruotolo twins to talk about the origins of the Buggy choke. The brothers have gone so far, that they explain concepts regarding the choke, rather than just the technical aspects of the move.

The “OG” version of the move is first up, and the brothers explain it better than anyone has in the past (that’s not saying too much because nobody really tried to break it down before). Tye and Kade then go deeper, breaking down a one-legged version of the choke, as well as a setup from half guard (never before seen).

IN the second half of the Buggy Choke BJJ DVD, the Ruotolo twins cover a few very unusual setups of this already unusual submission. Namely, they present a way of getting the Buggy choke from the back, as well as some key pointers on pulling it off against bigger grapplers. The slingshot setup of the buggy choke is definitely something worth exploring (ant attempting).

There’s a very slick guillotine – buggy choke combo that shows just one direction in which you can go after attempting a Buggy choke submission.

How We Grade The Good, Bad And the Buggy Choke BJJ DVD” by the Ruotolo Twins

Considering this Craig Jones instructional DVD’s technical aspects and quality of content, we come to an overall score for this instructional that I’ll deliberate in short below.

A BJJ fanatics DVD, which guarantees that this instructional is up to the modern BJJ DVD standards. HD quality, clear sound, precise camera work, audible instructions by the instructors, and the availability to acquire as a digital download or a hard copy DVD set.

The Buggy choke BJJ DVD by the Ruotolo twins is definitely a solid instructional. It covers a submission that we know little about. For example, I doubt anyone apart from Kade and Tye has attempted to hunt for the choke from mother positions outside of bottom sie control.

What I personally don’t like about the original version of the choke is that, similarly to Rubber guard, it requires knee flexibility and holds the potential for a knee injury you can actually inflict on yourself.

The Ruoptolos do offer different options thought, exploring positions for the choke that are easier on the knees. That said, this choke is still yet to be completely broken down and researched, so the DVD is quite short – shorter than what we’re used to seeing from BJJ fanatics.

Finally, while everything the Ruotolos show, they show precisely and in-depth, there’s no real connection between the chapters. It is a DVD with cool and effective one-off moves, but there’s no system included anywhere.

A short DVD covering a move that might be slightly dangerous to perform from certain positions. Taught by a couple of the best grapplers in the world that will only get better. Bottom line – perfect for those already fans of the buggy, as well as those that might be looking to explore it. If you don’t like it, though, I doubt this DVD will make it any more appealing.

A good instructional to have if you like being a sneaky and unpredictable submission hunter. The Ruotolo twins are definitely going to be around the top of the grappling community for the foreseeable future. It is nice to see them share their knowledge early on, and this Buggy choke BJJ DVD is a great opening salvo.