Wallid Ismail is not very well known name among Brazilian Jiu-Jitsu practitioners. But, it’s a mistake as Wallid is a world famous Black Belt from Carlson Gracie Academy in Brazil. At the time when he was competing in Brazil and around the world, he was known for his aggressiveness, toughness and a very proficient clock choke.

In the early 90’s he was able to defeat Ralph Gracie by points and after that, he defeated Renzo by points too, and then he went on challenging the Gracie family members.

Wallid Ismail proclaimed that he will defeat any Gracie in any style. Gi, no GI, Vale Tudo or any other type of fighting. He was trying to prove that he is a world-class competitor who fears no one. As Wallid was very loud at that time challenging Gracies, they had no other option but to accept a challenge.

Eventually, Royce Gracie accepted a challenge to fight Wallid Ismail, but with special rules. It will be Jiu-Jitsu fight in a GI with no points and no time limit.

The match between Wallid Ismail and Royce Gracie took place in Brazil, in December 1998. 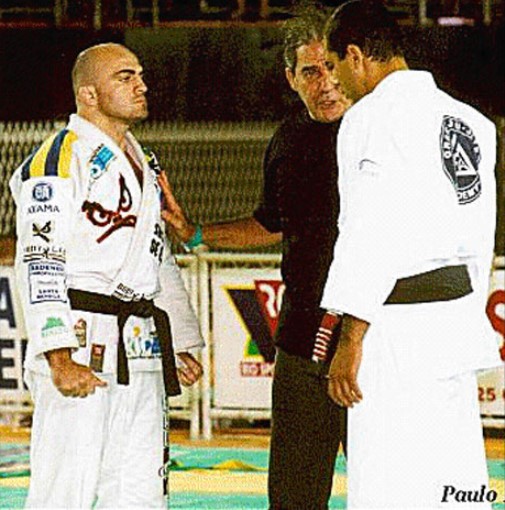 The match started very aggressively from Wallid’s side. As usual, Wallid was an aggressor while Royce was mostly on defense playing guard after Wallid took him down. As Wallid was close to passing Royce’ guard, Royce turned into the turtle and it turned out to be a bad decision. While holding Royce in the place, Wallid was able to lock the clock choke. After Royce was trying to escape without success, he didn’t want to tap and he rendered unconscious.

It was a huge victory for Wallid Ismail, his Carlson Gracie Academy and especially for his coach Carlson Gracie as he was in a fight the other Gracies for most of the time. You can read about Carlson’s opinion on Helio and other Gracies HERE. Even now Carlson has no good words for famous Gracies including Helio and Royce.

Wallid Ismail had very successful MMA career competing at Pride, but his win over Royce Gracie in Brazil will still remain his greatest Victory and the fight Wallins is most proud of. Choking the Royce Gracie, who was already world famous MMA and UFC fighter was a big deal at that time. So, watch the video below and enjoy Wallid Ismail vs Royce Gracie Challenge match.

Carlson Gracie – The Most Controversial Interview in Jiu Jitsu ever