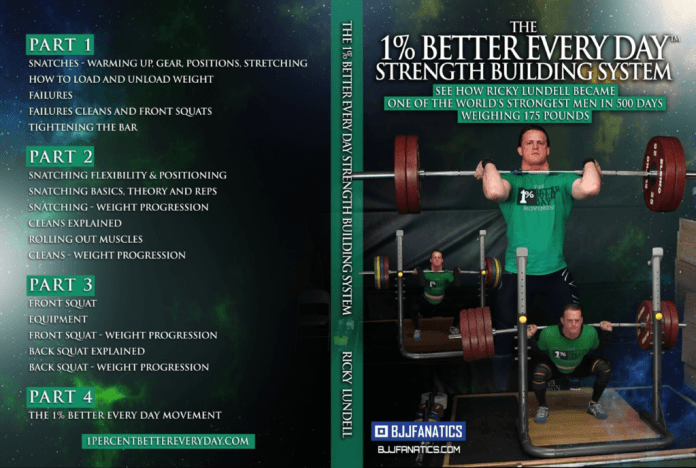 Strength and conditioning for BJJ never had so many resources as it does today. the biggest part of the grappling puzzle is now entirely cracked open. Whether it is conditioning books or strength DVDs. All of them offer a great part of the puzzle. However, wouldn’t it be great if we had both in one product. A DVD that contains information on both strength ah and conditioning. Well, Ricky Lundell offers not just such a DVD but also an accompanying E-book to take it to the next level! The “1% Better Every Day” Ricky Lundell DVD & E-book bundle is the last strength and conditioning instructional you’ll ever need to get! 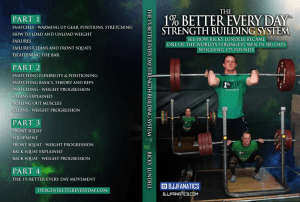 In terms of strength and conditioning, Ricky has been in and out of gyms his entire life. As a wrestler, he understood the need of strength very early on. So, he spent a lifetime experimenting in the weight room, along with his incredible grappling developments. His efforts resulted in the best strength system for grapplers that exists today!

As a grappler, Lundell is a 4th-degree black belt under Master Pedro Sauer. It doesn’t get more legit than that. Actually, he is the youngest grappler to get a 4th-degree black belt at 31. Lundell was also an MMA fighter and a Pancrase World Champion. Today, Lundell is the head wrestling coach at Bishop Gorman High School. He also teaches MMA and BJJ, along with specialized strength and conditioning. Some of the fighters to train with him are Jon Jones, Ronda Rousey, Frank Mir, Miesha Tate, and many others. Now, all his strength and conditioning knowledge is available with the Ricky Lundell DVD & E-book Bundle. 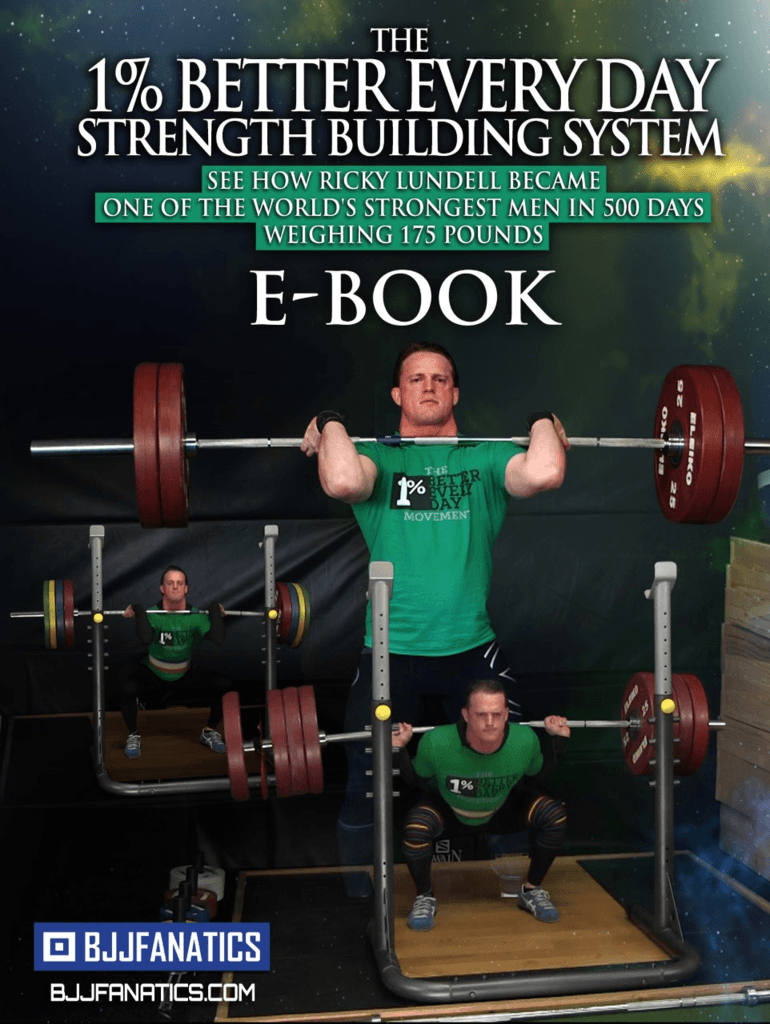 Apart from being a high-level BJJ black belt, world-class grappler and an incredible strength coach, Ricky is also a motivational speaker. He came up with the “1 % Improvement Movement” as a challenge to himself. Now, he uses it as his day to day philosophy in both life and training.

Based on the ancient Japanese principle of Kaizen, the idea is that you need to achieve continuous improvement. 1 % better every day is a great way of putting this into perspective. Lundell took it literally and decided to squat 1% more weight every day. The result? He went from a 275 lbs squat to a 600 lbs squat in record time.

Later on, he applied this philosophy to every aspect of his training. Today, he even teaches grappling and MMA with the same concept as the foundation. As Ricky puts it, the idea is to do something that might make you afraid every day. It is the recipe that guarantees success – when you do it in small increments. The 1 % better Every Day Ricky Lundell DVD will definitely turn you into a grappling beast in next to no time!

Ricky’s DVD comes in a very familiar setup. It is divided into four volumes, each tackling specifics of his system. While he initially applied his 1 % Improvement methodology to the back squat, here he offers a complete training system. You’ll get stronger, you’ll get more explosive and you’ll get faster without a doubt. The gas tank that’ll allow you to forget about round duration is just a byproduct.

Each volume works by taking you through specific movement patterns that apply to grapple. The exercise or exercises go first, followed by programming and correct ways to train. With Ricky’s training methods, you’re done and dusted in thirty minutes, leaving you ample time to grapple or go about your day. The unique portion of this Ricky Lundell DVD is that he offers incredible insider tips on executing the movements. From small grip adjustments to tightening the correct muscles, you’ll become extremely efficient at lifting weights.

Part one starts with the all-important warm-up. there’s no way you can go about doing Olympic lifts if you do not warm your body properly. As Ricky says, only full body lifts at high velocities can turn you into a grappling machine. That said, if you do not prepare for them, you’ll most likely get injured. that’s why this Ricky Lundell DVD opens with an extensive and efficiently warm up.

Next up, Ricky takes us through the very basics of how to load and unload the bar. Remember, Olympic lifting is a sport in its own and has a lot of details to it. safely manipulating the equipment is a precursor to effective training. He also touches on the subject of training to failure and when you should and shouldn’t do it. The first volume wraps up with a few key pointers on tightening the bar. Now you’re ready to get right int the meat and potatoes of the system. 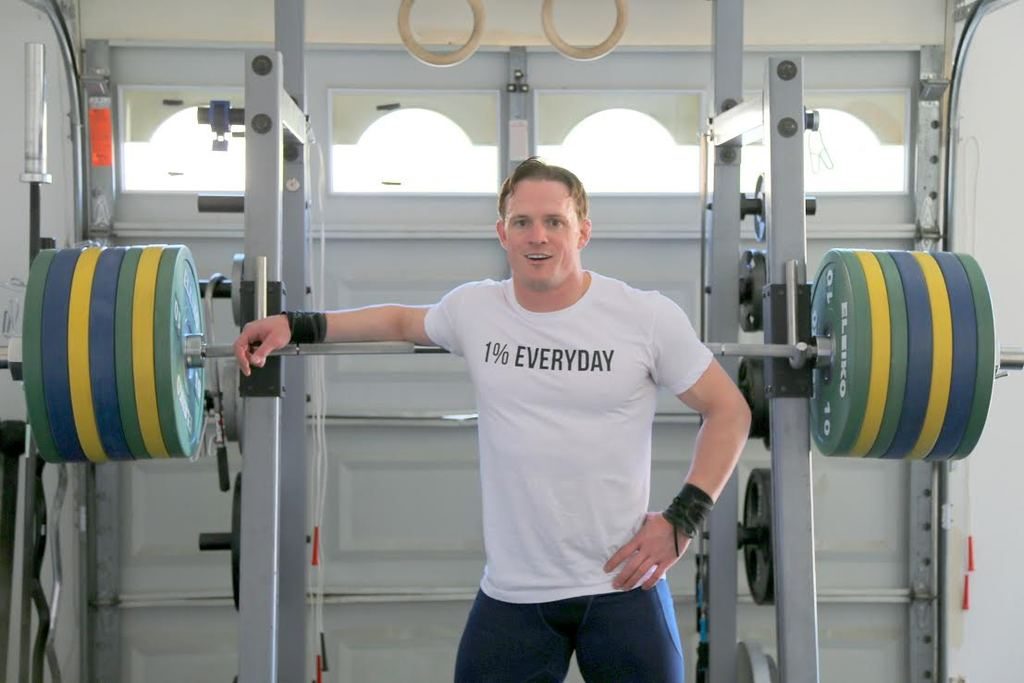 As previously mentioned, Olympic lifting is a sport of its own. it is also the arguably most efficient way of lifting very heavy weights very fast. The adaptations that you get in return are nothing sort of astonishing. Here. Ricky goes over the basic requirements when it comes to positioning and flexibility for the most challenging Olympic lift – the snatch. Lundell has an awesome system to take you through a progression of training with the snatch, explaining how many reps, sets and rest periods you should use.

The staple of Olympic weightlifting is the subject of the second half of this volume – the clean. As far as grappling goes, this is probably the most effective fit you can do. Once again, you go through the same steps as the snatch. Ricky starts with an introduction to form and posture. he then talks about tips and tricks like rolling our the muscles, before finishing with a complete progressive program.

Front And Back Squats DVD – Execution

In DVD number 3, Lundell finally arrives at his bread and butter – the squat. Here, he goes deep into squats, dissecting both the front and back squats. First up are front squats, which although harder, are better for BJJ, given the frontal loading. Of course, you get a run around of the required equipment as well as all the execution details. As you probably guessed, the next chapter is the progressions and workout program details.

the same then happens for the back squat. Form and execution explanation paves the way for the program. Keep in mind that all the programs in this system are interchangeable and work together to build a complete training plan.

The final piece of the Ricky Lundell DVD is a bit more theoretical. All the knowledge of progressions and execution of exercises won’t help if you’re not improving constantly. The theory behind the method is as important as the training method itself. Luckily, Ricky is a motivational speaker on top of being an exceptional coach. That means you get the ultimate explanation of the 1 % Improvement Movement philosophy as well as a way to implement it in your training. As a bonus, this also includes implementing it into your grappling training.

Finally, for all of you that have unanswered questions after the four-part Ricky Lundell DVD, there’s also an E-book included in the deal. In it, you get in-depth information on the programming and workout systematization. You also get details on the exercises, as well as some variations in case you have trouble executing the fundamental ones. All in all, you get 4 DVDs and E-book covering ways in which you can get stronger, faster and leaner for BJJ. What more could you want? Not to mention that the method is simple and requires minimal equipment.

I don’t know about you, but I’m off squatting. Oss!