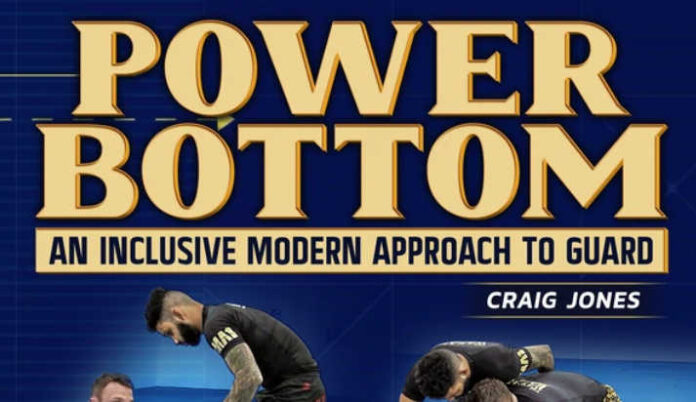 Craig Jones. If he is not winning left and right he is making waves in the BJJ world with funny comments, self-taunting memes, or B-team videos. Oh, and he does issue instructional DVDs on a regular basis. One of the best titles you can get in 2022 is “POwer Bottom”, a Craig Jones instructional on modern guards. No-Gi guards, of course.

This time around, Craig delivers a 6-part DVD that tackles the subject of how to optimally play guard for modern Jiu-Jitsu. Lately, Craig Jones has been using Mexican terms naming his innovations, so that’s exactly how he begins this DVD – with the so-called Mexican concepts and principles. Those involve “if this – then that” situations.

Long-range, mid-range, and short-range guards manipulating the knees, innovative half guard variations (reverse Z and false half guard), and a bunch of leg locking setups feature heavily throughout this Craig Jones instructional. He even goes into defensive guard territory, exploring interesting turtle concepts and counterattacking from the all-fours position.

I doubt Craig Jones needs too much of an introduction. He is the second-best grappler in the world (according to himself) and one of the all-time greatest without a doubt. Craig is easily the most famous grappler to ever come from Australia.

He is a Lachlan Giles black belt since 2016. He is known as one of the world’s deadliest leg lockers, and a member of the now-defunct Danaher Death Squad. Craig started training in Australia in 2006, changing a few academies before ending up at Lachlan’s Absolute MMA Academy. Craig has three Polaris championships as a black belt, as well as ADCC silver. He also has beat pretty much everyone of note in the grappling world.

Guard is a tricky subject given that it encompasses about a third of everything that happens in Brazilian Jiu-Jitsu. In order to clarify, this Craig Jones instructional covers offensive and defensive, no-gi open guards.

The goal of the DVD is to present Craig’s new take on guard play and draw opponents into positions that are unknown to them. While most of the “Power Bottom” DVD focuses n supine and seated guards, there’s also a portion covering the turtle position. Of course, leg locks, triangles, funky throws, and takedowns are never far away when Craig Jones is teaching anything.

Craig usually works at a high level, and most of his instructional tend to be better understood by more advanced grapplers. This DVD, despite showing some interesting new concepts that everyone can use even when starting from day one, also requires previous knowledge of most of the positions mentioned, as well as the idea of playing guard in BJJ.

“Power Bottom” is best for people with purple belts and above, in order to really get the most bang for your bucks. While there are some fundamentals in there, most of the movements that are crucial for executing the techniques in this Craig Jones instructional are too advanced for beginners.

If you have experience in no-gi and leg locks, though, you’ll thoroughly enjoy this DVD.

There are 6 total volumes in the “Power Bottom” Craig Jones instructional. Each of the first four volumes is around 45 minutes long, while the final two exceed the 1-hour mark. Each volume contains numerous chapters and the chapters are further divided into systematized sections. This makes the instructional easy to navigate and follow.

Craig is a native English speaker who speaks clearly so it is easy to understand him. He is also very precise and concise, not wasting time on huge chapters that spin out into tangents unrelated to the subject matter.

Video and audio quality are up to BJJ Fanatics standards (which happens to be the golden standard for BJJ DVDs nowadays).

Craig Jones begins by presenting his “Mexican concepts and principles”. He has his own reasons for naming them “Mexican” but in essence, he talks about very logical things that most people in BJJ seem to ignore for some reason. Those include getting up whenever you can, shooting for takedowns whenever you can, and going to turtle whenever you can.

He also addresses the crucial concepts of understanding the different ranges of the guard, as well as an old wrestling concept about the height of the hips and head.

In the second portion of the first volume, Craig goes into long-range guards, focusing mostly on concepts over techniques. After defining what long-range guards are, Craig talks about using takedown shots to set up attacks while seated. He focuses on the double leg, using the Mexican principles previously taught.

Part two of this Craig Jones instructional stays on course with long-range guards. The subject matter of this volume is how to manipulate the knees in order to open up single leg takedown options from the guard. However, Craig does not just look into single-leg takedowns, but rather combination attacks that also include leg locks.

The Reverse De La Riva guard, features heavily in this volume, as do arm drags and ankle picks.

Volume three of “Power Bottom” looks into mid-range guards. A few crucial concepts like shoulder line and heisting help put this range into perspective. From there on, it is all Ashi Garami and front headlock entries.

This is also the volume where lots of that Craig Jones special vocabulary comes into play. You’ll find chapters named “putting the age in Sumi Gasehi” and “Mexican karate arm drag”. They are as effective moves as they sound weird and annoyingly fun.

This volume presents lots of very interesting new guard variations thought up by Jones. The reverse Z guard is first up. Craig teaches how to establish and retain it, as well las how to launch attacks. Most of the attacking options include propelling the opponent overhead which is always fun to do.

The focus shifts toward short-range guards midway in this fourth volume. Craig showed a few knee levers and off-balancing tactics. He then uses the “false half guard” to further dwell on attacking from short-range guards. HE uses both underhooks and “the overwrap” to achieve sweep and/or leg lock attacks.

The turtle position is becoming more and more popular in the last couple of years. Craig has obviously jumped on the bandwagon, demonstrating who you can use the position in a more offensive manner than most think.

Craig starts with a few new concepts about approaching the turtle in general, including some offensive grip fighting scenarios. He then shows some very interesting ways to roll out of the turtle, exposing the weaknesses of the seatbelt grip.

This portion of the “Power Bottom” Craig Jones instructional is longer than the previous volumes and explores ways to roll out of the turtle (like Granbys) go for leg locks (kneebar) or use some old-school wrestling moves like the power half Nelson to deal with the top person.

The final volume of “Power Bottom” takes the turtle position even further. Craig teaches very interesting ways in which you can use the wrestling “all fours” position like a guard in BJJ. He shows how to shake people off, switch positions, granbying, and how to stand up to turn the tables.

The second portion of the final volume is all about dealing with the rear body lock. Craig’s choices include Judo throws like Uchi Mata and Harai Goshi, as well as ways in which you can roll into Ashi Garami positions for quick finishes.

How We Grade The “Power Bottom” Craig Jones Instructional

Considering this Craig Jones instructional DVD’s technical aspects and quality of content, we come to an overall score for this instructional that I’ll deliberate in short below.

The camera work is done very professionally, covering multiple angles on almost every chapter. The video quality is HD, as is the sound. Craig is talking very audibly and understandably.

The full running length of this Craig Jones instructional is almost five and a half hours. The material is divided into sections, that are further split into chapters. There is time coding on each chapter so it si easy to find particular ones when you’re searching.

There’s no doubt whenever Craig Jones is involved that you’re getting the highest level of BJJ instructions. However, as is the case with most of the top-level competitors, their take of what is fundamental greatly differs from what people with no or little experience find to be fundamental. this is an awesome DVD, but for people that are purple belts and above, have previous No-Gi experience, and a working understanding of leg locks.

That said, Craig really explores some unique ways of approaching the guard. there’s a lot of wrestling, as he uses takedowns as sweeps lots of the time. Moreover, he explores offensive ways to use “bad” positions like the turtle and all fours when you’re the bottom player.

An outstanding feature of this instructional si that Craig categorizes guards as long, mid, and short-range, providing a very useful way of looking at bottom positions.

The “power Bottom” DVD will definitely teach you a new way of playing guard and using all kinds of wrestling-based moves to get sweeps or set up intricate Ashi Garami leg lock attacks. You’ll find it hard to navigate through if you’re a beginner, and even a fresh blue belt, in my opinion. Hence the 9/10.

If you’re looking to improve your guard and throw in modern-day attacks like leg locks, this is the perfect DVD for you. The “Power Bottom” Craig Jones instructional will take you through offensive and defensive aspects of the guard, allowing you to be a constant danger to the top person. IF you like No-Gi and leg locks, you simply have to watch this DVD.