Mikey Musumeci will officially be the World record holder for the fastest submission in IBJJF history.

Mikey Musumeci,3x world champion in 2 different weight classes (twice at the light featherweight division, and once at the Roosterweight division). He had an amazing performance at the IBJJF World Championship 2019, by winning the black belt Roosterweight division. Mikey managed to score the fastest submission in the history of BJJF Worlds finals. With a straight ankle-lock against Rodnei Barbosa in just 12 seconds.
With this submission, Mikey broke the 20 years old record, which was held by legendary Rodrigo “Comprido” Medeiros. In 1999, at the IBJJF Worlds Medeiros submitted his opponent in 17 seconds.
Mikey is also the first non-Brazilian who becomes to become 3x IBJJF  black belt world champion. 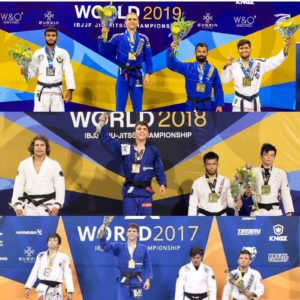 Musumeci announces the news on his Instagram. He is now in the process of having the Guinness World Record books updated, to confirm that he is now the holder of the fastest submission in IBJJF history.

I MADE A NEW GUINESS WORLD RECORD!!
Here guys is me executing one of my favorite submission the straight ankle lock in black belt worlds finals!! One of my favorite movies growing up was “61” with Roger Maris and Mickey Mantle (die hard Yankee fan for life ) the record before me was set by a legend and inspiration to me professor Comprido!!
In 1999 (when I was 3 years old) he set the fastest submission ever in black belt worlds finals (17 seconds). He held this record for 20 years!!!!
Last year in my worlds final I was able to finish my match in 12 seconds beating this record!
Currently in the process of getting it updated on @guinnessworldrecords website!!! It is really so amazing to be a part of history!