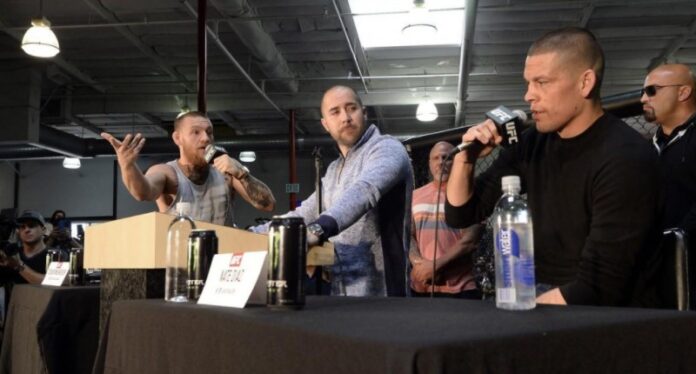 Conor McGregor suddenly decided to address the topic of doping, and in his verbal attack he singled out one of his biggest rivals – Nate Diaz.

“Everyone is on steroids,” could often be heard from Diaz’s mouth, and the image of the “pure” athlete of this popular Stockton fighter was briefly tarnished during 2019 when Nate tested positive for LGD-4033, better known as Ligandrol.

Many were surprised then, and Diaz was also surprised who still managed to prove his innocence in this case. Recall, Diaz himself informed the public about his situation in October 2019 and claimed from the start that he was “clean” and had no intention of hiding what was happening, and a few days later it turned out that he was telling the truth.

The culprit was the contaminated supplements, the multivitamin that Nate used.

This is exactly the case, McGregor reminded us these days, who addressed the main UFC anti-doping man on Twitter – Jeff Novitzky.

Conor first complained “that it is no longer disclosed who was all caught,” which in his opinion means that “I can keep that information hidden” and/or that “justification shit is accepted like contaminated supplements”.

“Jeff Novitzky, how come the public is no longer talked about positive tests? How is it that after Nate Diaz’s steroid debacle, where he produced his own contaminated multivitamin and was then expressly justified before a very lucrative fight, we came to hide the results ? “ – McGregor then wrote.

“Everyone is on steroids, Nathan Diaz, who uses steroids, told us, “the Irishman continued.

In the meanwhile, Conor was contacted by Novitzky himself, who shared a video with him in which he explained Diaz’s situation back in 2019, and along the way wrote to him that he was free to contact him and discuss everything one on one.

“Jeff, thank you for explaining that to me. Silence makes sense. Besides, where’s my USADA jacket for 50 clean tests, I see everyone else getting it? I want to wipe my ass with it,” the former UFC champion wrote to Novitzky

As expected, the so-called Diaz got involved in the whole discussion and stabbed McGregor with a photo from their first meeting and with the words: “you see what these steroids did”.

All this, of course, did not matter, so Conor and Nate exchanged a few more “blows”, and how the whole discussion went, see below:

Usada tested me right before this. Blood and urine. That’s twice this week. I don’t blame them, I’m a animal. What irks me tho is there is never an announcement of athletes caught anymore? This means –
1. They can keep it quiet.
2. Tainted supplement bullshit excuses are accepted pic.twitter.com/6Vqii96Z4o

.@JeffNovitzkyUFC how come the public isn’t told about positive tests anymore? How after the Nate Diaz steroid debacle, where he produced his own nutrition companies tainted multivitamin, was instantly cleared prior to a mega money fight, are we now in the dark on test results?

Mgregor fast system
This is what steroids do to u 👊🏼 pic.twitter.com/QiSkgTLqcE

Mgregor fast system
This is what steroids do to u 👊🏼 pic.twitter.com/QiSkgTLqcE

Silly goose, that was pre @McGregorFast.
McGregor FAST was created in the aftermath of that fight.
Here is an image of a direct result of me following the @McGregorFast program.
Your face left like a bowl of leftover salsa.
Now Download the app you little juice head turkey 🦃 https://t.co/YI5H7N0PD7 pic.twitter.com/g15DDwm6Y1

Unless you’ve done this, shut your mouth. pic.twitter.com/2ZwREoxXoi