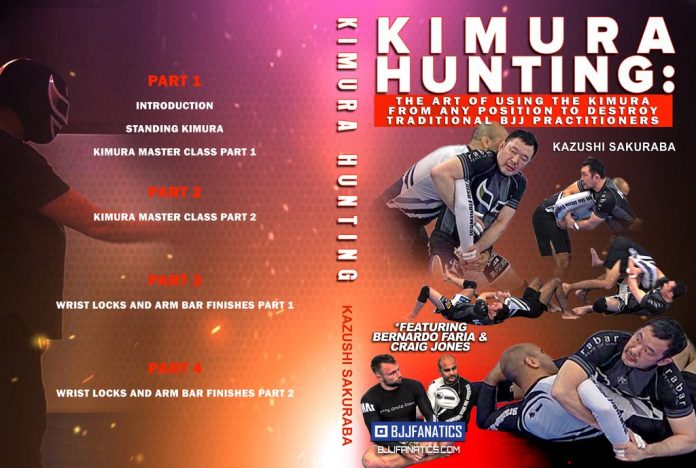 Kazushi Sakuraba is a real living legend in the domain of combat sports. During his prime, Sakuraba’s grappling skills had the fear of God in all of his opponent’s whether it was grappling or MMA. Sakuraba’s Kimura attacks are so versatile and numerous, that if the move wasn’t named Kimura already it would definitely bear his name. All his years of Kimara experience now come together in his brand new Kimura Hunting DVD set.

The “Kimura Hunting DVD” is a submission grappling instructional that’s as different as possible from your everyday BJJ instructionals. It represents a life’s work of an extremely dedicated and unstoppable grappler. To this day, Kazushi Sakuraba continues to compete, albeit more in grappling rather than MMA. Still, it is not a small feat after a literal lifetime of fighting. The Japanese legend still has a few tricks left up his sleeve. This DVD clearly demonstrates that nobody can really teach you everything about a certain move. Regardless of what you’ve seen or think you know about the Kimura, Sakuraba is about to surprise you! Just like Sakuraba himself, this DVD is uniquely original and has some of the slickest Jiu-Jitsu I’ve ever seen!

Contents hide
Sakuraba – A Legend Of MMA And BJJ
The Sakuraba-Style Kimura
What Is In the Kazushi Sakuraba “Kimura Hunting DVD”?
Standing Kimura
Kimura Masterclass
Wrist Locks And Arm Bar Finishes
Wrapping Up

Sakuraba – A Legend Of MMA And BJJ

Writing a Kazushi Sakuraba bio deserves its very own series of articles. Since the subject matter, today is his Kimura HUnting DVD rather than his career, I’ll try to condense it all. Born in 1961, in Showa, Akita, Japan, Sakuraba discovered martial arts at the age of 15. His first steps into the world of fighting were via amateur wrestling. High school wrestling successes led him to collegiate wrestling championships. Eventually, Sakuraba opted for professional wrestling or Puroresu. He even focused on gaining some weigh, as he was initially too light to be competitive at barely 150 lbs.

From professional wrestling, Sakuraba went into Shoot-wrestling, something akin MMA. There, he worked with world-renowned catch wrestling legend Billy Robinson and soon fell in love with Catch. All of his different wrestling backgrounds helped Sakurabadevelop his ultra unusual ground game that brought him lots of victories over the years.

It wasn’t long before Sakuraba ended up in the UFC during its early days, and then Pride FC. It was in Pride that Sakuraba got the nickname “The Gracie Hunter” after he beat Royler, Royce, Renzo and Ryan Gracie in spectacular fashion. After a long and legendary Pride career, Sakuraba went on to K-1, then Dream and is now under contract with Rizin fighting championships. His pro-MMA record is 26-17.

Sakuraba is still very much active on the submission grappling scene in events like Metamoris, and Razin’s grappling only bouts. He is also the man behind the hugely popular Quintet Grappling Tournament.

Sakuraba wasn’t known as the “Gracie Hunter” for nothing. Two out of his four victories against the Gracies came via Kimuras. In his very first bout with a Gracie, Sakuraba faced Royler. After a long match, Sakuraba caught Royler in a tight Kimura. Royler refused to tap leaving the referee no choice but to stop the fight in order to prevent a horrible injury. Sakuraba made history with that win, as he became the second man to submit a Gracie after Kimura submitted Helio with the same move.

Sakuraba’s victory over Renzo also came via Kimura, but in a much more unorthodox fashion. Namely, Renzo had Sakuraba’s back and Kazushi still managed to lock on a Kimura, flip the position and even break Renzo’s arm, as he wouldn’t tap. Rubin Williams, Minowa, and Funaki are just a few more high-profile names that fell victim to Sakuraba’s Kimuras. He even made further history by almost tapping Ralek Gracie with it in Dream.

All of Sakuraba’s crazy Kimuras are explained in detail in the Kimura Hunting DVD. You even get a highly detailed instructional of the Kimura he used against when Renzo had his back.

What Is In the Kazushi Sakuraba “Kimura Hunting DVD”?

What to expect from a Kazushi Sakuraba DVD? Well, the unexpected, of course. The arguably, most unorthodox grappler of all times, now shares his complete knowledge on how to destroy your opponents’ arms. However, he doesn’t just cover his famous Kimuras. The DVD also includes straight armlocks and armbars, as well as crushing wrist locks.

The organization of the instructional is also very different from your garden variety BJJ instructionals. Instead of a bunch of chapters, each of the four volumes contains one masterclass. Everything Sakuraba knows, whether he learned it or invented it, is here. Expect a mixture of BJJ, catch wrestling and even pro wrestling. Make no mistake though, this Kimura system is so effective that even Gracies can’t defend against it!

Another hugely entertaining fact is that Bernardo Faria and Craig Jones feature alongside Sakuraba throughout the length of the Kimura Hunting DVD set. Oh, and the DVD is in Japanese with simultaneous translation in English.

The only DVD that has as a few chapters is the first one. In it, Sakuraba goes over an introduction to the system. It is short and to the point, followed immediately by the standing Kimura portion. Standing Kimuras, as Sakuraba explains, have a very wide range of application. They can work in training, in sports BJJ, in MMA or even in self-defense scenarios. As unorthodox as it may sound, the information in this part of the Kimura Hunting DVD can also provide you with an effective and unusual takedown system.

Every standing Kimura variation that Sakuraba shows eventually ends up on the ground. The level of detail that he covers, though, is unlike any other Kimura instructional ever! From initial gripping to weight management, to arm control and crucial torquing details, everything becomes clear!

The Kimura masterclass begins in the first volume of the Kimura Hunting DVD set. However, only a small portion of it is located there. After the introductory part, the entire second volume is one big Kimura lock masterclass. In it, Sakuraba starts from side control and continues to demonstrate Kimura setups from literally everywhere.

As it turns out a huge part of the Kimura lock is the angle of submission, rather than the grip. Prepare for Sakuraba to dispel the myth of the Kimura as a power move that only relies on strength. In the side control setup, for example, Sakuraba clearly demonstrates how his Kimura works vs. the traditional one. He teaches the importance of angles in both retaining the position and opening up the submission, regardless of defenses. A smooth transition from a Kimura to a straight armlock paves the way for what comes next.

The wrist loc kand armbar masterclass is so big, that Sakuraba uses up both the remaining volumes of the Kimura Hunting DVD. Once again, you get only one chapter per DVD, which is more of a title than a specific description. The order of moves though, and how they all work together is obviously very carefully thought out. Making a DVD work by showing innovative and original moves without including chapters is hard, but Sakuraba has it down to a science.

The control that Sakuraba has over Bernardo and Craig’s limbs is incredible. Even from the very first grip, he already sets the submission in motion. His closed guard wristlock setups will turn you into a real submission machine off your back. They either finish the job, get you a sweep or open up a straight armlock or a Kimura finish. The best part is, you can attack both arms, and even switch up the attacks effortlessly!

How do I put this… I needed this DVD. You need this DVD. Everyone in combat sports needs this DVD. heck, everyone in the world needs the Kimura Hunting DVD! It is that good, that useful and that entertaining. Four volumes of nothing but Sakuraba magic of arm destruction after arm destruction. It is a real submission treat for everyone, Gi or No-Gi, competitor or not, white belt or black belt.