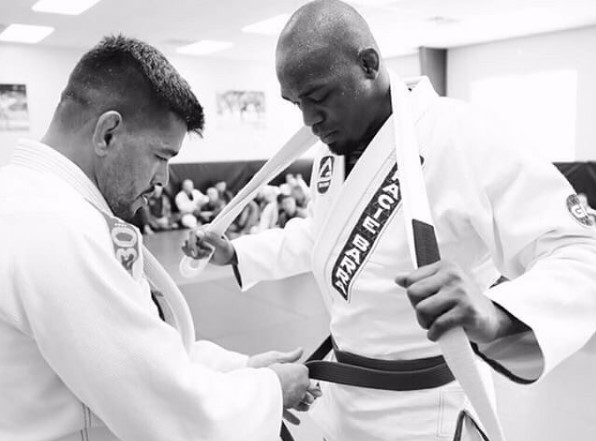 Jon “Bones” Jones, former UFC champion and, by many, the best of all times in MMA got promoted to a Blue Belt by his professor No GI World Champion Roberto Alencar from Gracie Barra, New Mexico.

Although we could see Jones in MMA having no problems with Jiu Jitsu guys and he managed to submit 6 of his opponents inside the Octagon and that includes a memorable victory over Lyoto Machida. He Applied a standing guillotine choke that make Lyoto go unconcious.

So here is the question. Why is he only a blue belt? Because Jon and his professor thinks so. His Professor thinks that he needs to learn the principles of jiu jitsu and understand the rules and philosophy. As we can see Jon Jones agree with that. But no matter what’s his belt color we all know how good Jones is and how good his BJJ mechanics are.

So, congratulations Jon on your blue belt, your humbleness and your respectful approach to BJJ.

“It was an honor to receive a blue belt today from my professor @tussagb. Wanted to sincerely thank my family at both @jacksonwink_mma and @graciebarranm for always standing with me, encouraging me, and pushing me to new heights. This week the belt was blue, next week it will be gold.”

Jones pointed to winning a Gold belt as next week on July 29 in Anaheim, Calif he’s fighting against Daniel Cormier for the UFC title. GL Jones!