The BJJ community is a very coo land laid back one, not unlike the surfing community. And still, we do have that urge to put people In categories, even if we do not really mean much by that. Jiu-Jitsu stereotypes definitely exist and it is easy to find most of them on any given mat space around the world. That said, they’re not to be taken seriously (except in certain situations) and are actually quite fun to try and figure out. The important thing is to remember they’re just that, stereotypes, and by no means, they depict the people that we categorize accordingly. So, what is the JIu-Jitsusterotype you think you fit in?

When you come to think of it, most people really do fall in a certain category, especially in BJJ. Spend enough time on the mats and you’ll notice that certain types of people seem to be repeating throughout the years. These are the JIu-Jitsusteroptypes that are common and are fun to recognize after a while. With that in mind, if you are а coach or academy owner, some of them do need to be handled, when I come to hygiene or behavior. However, most of them are actually ubiquitous as sweat pools after hard rolling sessions, and they do make BJJ even more interesting.

Whichever way you take a look at the BJJ community there’s no denying it is one that nobody minds being a part of. Grapplers are some of the most laid back, cool, and interesting people to be around. Well most of the time, anyway. With this isolation and pandemic thing going on, BJJ folks are getting as jumpy as the rest of the world with no training available.

That said, getting tapped out and having your ego checked on a daily basis does produce some really easy-going folks. That and the addictive nature of Jiu-jitsu are a winning combination, one that is behind a really cool worldwide community. As fun as it all is, there’s also a certain measure of reality hough, knowing that you’re actually playing murder with the people you’re hanging out with. And, even though the community is usually judgment-free and all, there are still the Jиu-Jitsu stereotypes to consider.

So, before I go one, let me reiterate a point for all you social justice snowflakes out there. Iф you recognize your self in one of the JIu-Jitsu stereotypes and you don’t like it, it’s not my, or anyone’s fault. You might just be in there фor a  good reason, and knowing it, might just even prompt you to change something. OR not, the choice is yours. The bottom line is that looking at the Jiu-Jitsu stereotypes is a fun thing to do, and nobody thinks less of anyone as a person or grappler because of it. That said, let’s see where you fit the best.

The way I see the JIu-Jitsusterotypes is as every other stereotype out there – it’s a broad category of people that share certain affinities or traits. In most BJJ cases, those are positive or funny ones and are usually the source of plenty of in-academy jokes. There are a few, though, mostly pertaining to hygiene and other important BJJ rules of conduct that really does merit a quick change. However, instructors, coaches, and even teammates are already well versed in recognizing those pesky ones and setting them straight, so I nth end, it is all fun and games after all.

I’ll start off with eth folks that annoy me the most, or second-most. AS grapplers, we don’t mind the occasional scrap, cut, or bruise. It is a form of fighting after all. However, what I signed up for is Brazilian Jiu-Jitsu and not Kali knife fighting. So, when a person with untrimmed (to put it mildly) finger and/or toenails starts scratching around for dear life, it does tend to become uncomfortable (again, putting it mildly).

Trim your nails people! Nobody likes to roll with Edward Scissor Hands! As obvious as this sounds, folks like this are all around BJJ gyms and are certainly one of the most common JIu-Jistusterotypes. Hint: you don’t want to be known as one of them!

Here’s a fun one. Just like in school, every BJJ gym has a proverbial teacher’s pet. It is that person (or persons) that seems to be extremely close to instructors (or wants to be). They come in early, try to insert themselves in everything coaches do or say, and sometimes even take a disturbingly huge amount of privates. These types of grapplers do come across as interesting, particularly because they are in a category of their own within the ecosystem of BJJ. They roll with a select few, tend to warm up differently, and try to find recognition for everything they do in every possible moment.

Let’s face it, the time of YouTube BJJ warriors is pretty much done. Enter the BJJ DVD instructional horder. Instead of just looking at short clips, people now have the opportunity of watching a 4 tp 8 part specialized BJJ DVD on just about any subject. And the ones that get the most attention, are, of course, the ones that have nothing to do with fundamentals or the stuff that people learn in class.

It’s all cool when it comes to using any of the nutty moves and ideas people get from instructionals in a roll, they often come up short though. The curious thing is that this is one of the Jiu-Jitsu stereotypes that is on the rise, despite the fact that flying guard passes and nutty lapel guards do not yield any tangible results. It is fun smashing them, though.

As with everything that is popular, and I daresay BJJ is definitely popular, there are those folks that are all about the appearance. Don’t get me wrong, they can be deadly grapplers on the mats, but that doesn’t mean grappling comes first for them.

These are the girls and boys with pristine hairstyles, sometimes makeup, nails polished, ironed Gis, and numerous futile attempts at making their Gi and belt stay tucked and neat throughout an entire class. Matching colors of finger tape and GI or belt are also not uncommon. 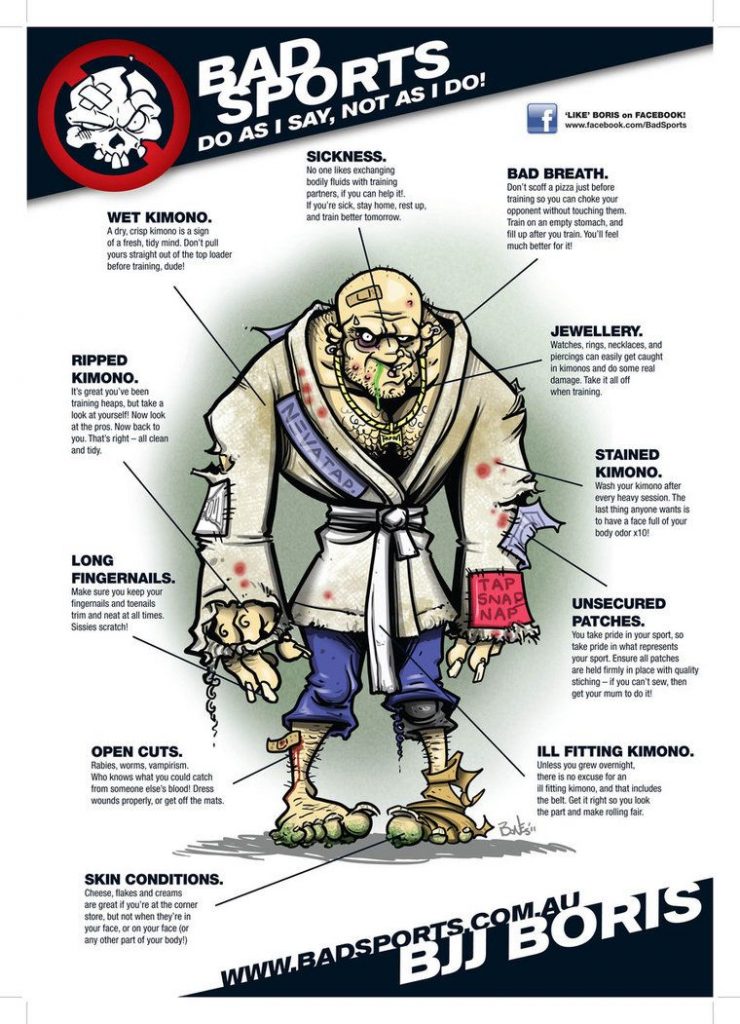 I’m using the term Boris quite freely here, inspired by a poster we have at the gym by Bad Sports. It depicts a grappler that fits in one of those Jiu-Jitsu stereotypes you don’t want to be associated with. I other words, everything that is a DON’T in BJJ hygiene, starting and often ending, with a smelly, pungent, and strangely soft Gi. Even though the strange color of the Gi, something between white and black sie enough, it is the smell that marks them.

Interestingly enough, these people are oftentimes not dirty themselves. They just have an aversion to washing their Gi, and miraculously, have the uncanny ability to ignore the different scents that radiate from them. Hint: Don’t be this guy/girl!

Perhaps one day, there will be songs about this type of Jiu-JItsusterotype. However, until (or if) such a tie comes, they seem to be taking BJJ rolls as seriously as the black belt absolute Mundial finals. It is all about going al lout, full speed, no mercy with them. In most cases, it is not a spazz we’re talking about, but actually a quite well-rounded grappler that has impressive technical skills. It is just the approach that is one that really makes them stand out in the environment your regular BJJ gym, which has people from all walks of life trying to roll around for fun.

As far as Jiu-Jitsu stereotypes go, you actually want to possess the skills of this guy/girl. This is the type of person that you never want to gain any sort of top control, let alone end up past your guard. They will hold, pin and grind you down using all their knowledge of angles, pressure, and in some cases (insert evil laugh here) catch wrestling stuff that will make you miserable. If you’ve ever tapped to pressure, you know the type I’m talking about. Interestingly enough, these are usually smaller grapplers that end up being real torturers from top positions.

This is the category for those that seem like exceptions from every rule. The old guy you think is feeble and has no cardio that actually has incredible amounts of “old man strength”. The huge powerlifter that you expect to smash and throw you around that ends up actually being the most technical person in the gym. The tiny girl you’re looking out for, only to end up tangled like a pretzel with no limbs to tap. In other words, everyone that seems a bit awkward and out of place before you slap and bump. What happens afterward is BJJ 101, though.

One of the most universally annoying JIu-Jitsu stereotypes out there. This is the person that loves coaching, even though they have absolutely no idea what they’re talking about. It is never a higher belt involved in coaching. Usually, this is a white or blue belt that just loves to correct everyone and constantly coach people, even during rolling. While lower belts will listen out of respect there’s a universal feeling of being annoyed. They can be tolerated, as long as they do not stop rolls, particularly when they’re in a bad spot to try and “teach. That’s a no go! 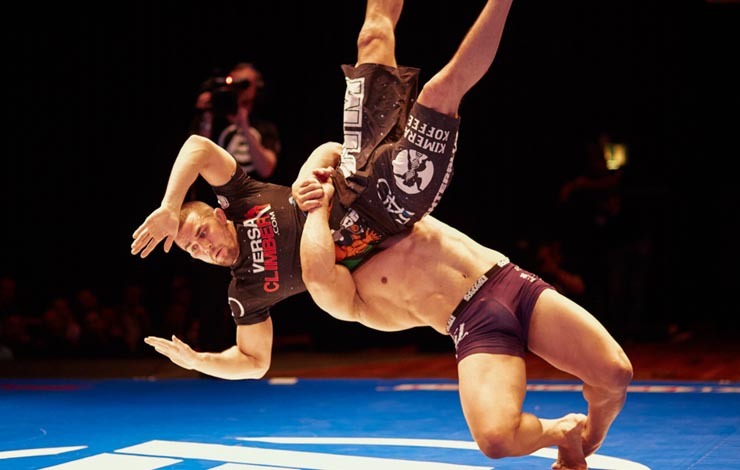 I might have been in this category for a while (and probably still secretly am). This one is for all the NO-Gi nuts that have to train in Gi BJJ academies. Coming in with No-Gi gear for a Gi class, or open mat often has people looking at you like you’re out of place. That’s actually because in most cases, you are out of place. While I love No_Gi and belive that every academy should offer No-Gi classes as well as Gi, if you’re in a gi class, then dress accordingly. You can always forgo grabbing the Gi and roll with No-Gi grips only.

There’s also the literal Naked Warrior, the one coming in with just extremely short spats on and nothing apart from them. Hint: even No-Gi enthusiast won’t take gladly to rolling with you!

Of course, these are far from the only common Jiu-Jitsu stereotypes out there. In fact, I expect there are a lot more, I just can’t think of them at the moment. That’s where you come in. Let’s make this even more fun. Add your own experiences with Jiu-Jitsu stereotypes in the comments and let’s try to build the biggest database in existence!