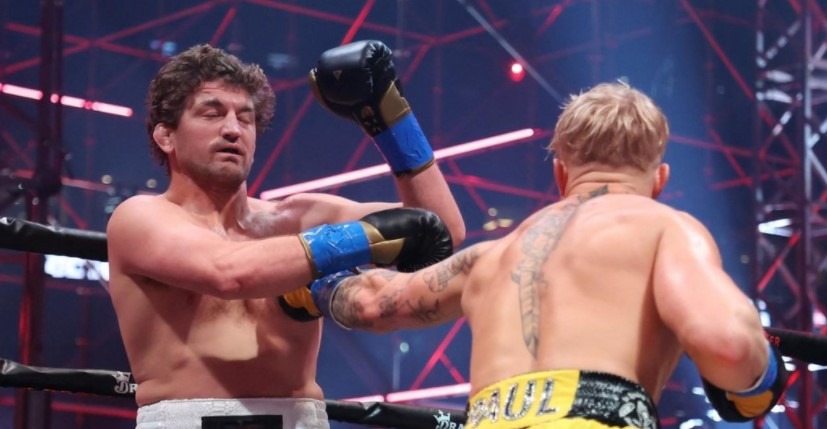 The boxing match between Jake Paul and Ben Askren lasted a little less than two minutes and it all ended with the first real hit. The well-prepared Paul hit a nicely executed combination, after which the referee did not accept Askren’s wish to continue the match.

It all started with Askren’s more aggressive approach, but Paul did not allow him to approach the zone from where he would endanger him. When he managed to reach the clinch, the judge quickly separated it, thus slightly jeopardizing the tactics of the former MMA fighter, which certainly referred to keeping the short distance as long as possible.

In the middle of the round, Paul becomes more aggressive and starts looking for a shot, in which Askren actually helped him with his bad movement.

Already at the first hit series, it was all over. Paul hit the left direct to which he connected the right crochet and Askren was immediately on the floor. He stood up, raised his hands, and asked for the match to continue, while the referee had to calm and remove Paul, hungry for the match to end. But there was no need.

Although Askren signaled that he was not finished, the judge did not think so. He told him he was unstable and shaken and decided to end the match.

Jake Paul managed to do what Andrej Koreškov’s two brutal knees failed to do, or the blows of Douglas Lima, Robbie Lawler, Luis Santos, and many other fighters during Ben’s MMA career at Bellator, ONE FC and the UFC.

This YouTuber seems to be really talented at boxing or maybe Ben just didn’t even prepare adequately. He was known to lack the technical quality of boxing, but he was always known for his granite beard and great fitness. Isn’t it true that Jorge Masvidal destroyed it so much with that blow?

Either way, Jake Paul can celebrate, which he already did in the ring as if he had just become an absolute world boxing champion. What’s next? Prepare for Conor McGregor’s roll call, in unlimited quantities.