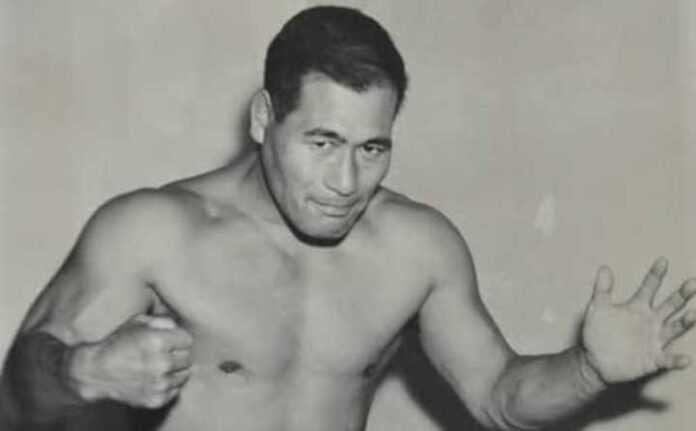 Masahiko Kimura’s life is nothing but amazing. It’s filled with Judo Competitions, personal life events, and lots of fights. What we bring you today is another fight in Kimura’s life.

In the summer of 1946, Kimura was standing at the end of a line of 60 or 70 people waiting for the train in the “Mukae-Machi” station, near Kumamoto city.

Suddenly 4 policemen broke through the entire line. One of them grabbed the man at the front of the line and struck him in the nose. The man dropped down to the floor from the pain.

The policemen did the same thing to everyone, even women.

Kimura was standing in the line and his turn came up. One of the policemen tried to grab him, but Kimura struck him in the hand.

Immediately all four policemen surrounded him and took him to the “Nagaroku” bridge near the station.

For Kimura, this wasn’t an ordinary fight. His main intention was to defend the honor of Judo.

The first policeman threw a right hand at Kimura, but kimura blocks it and kicks him straight in the groin. The policeman collapsed on the spot.

The second policeman attempted to grab him from behind, extending his arm, but Kimura’s quick reaction while using “Seoi-Nage” throws the policeman to the river.

Soon after that Kimura delivers a head butt to the third policeman knocking him out as well.

The 4th policeman was eliminated when Kimura grabbed his balls and squeezed with full force.

In junior high school, Kimura earned the nickname “Master Groin Squeezer”, so he was pretty confident with this technique.

Kimura was later congratulated and thanked by the police headquarters as these policemen had a history of assaulting women, eating and drinking without paying, and several other crimes. They were even looking for a way to punish them.

The main thing that Kimura was preaching is that Judo is not just a set of techniques. For him, Judo is a way to defend one’s self and the weak, and rectify society through its moral and intellectual education.

Fortunately, Kimura was in the right place and at the right time that day. He managed to defend the honor of Judo and taught us all that when you’re in a position of power you have a responsibility towards the people you live with.

Judo’s, and other martial arts moral education is so crucial because power in the hands of the immoral will only create a dystopian world for all of us.

Masahiko Kimura vs Helio Gracie – Kimura’s Review Of The Event