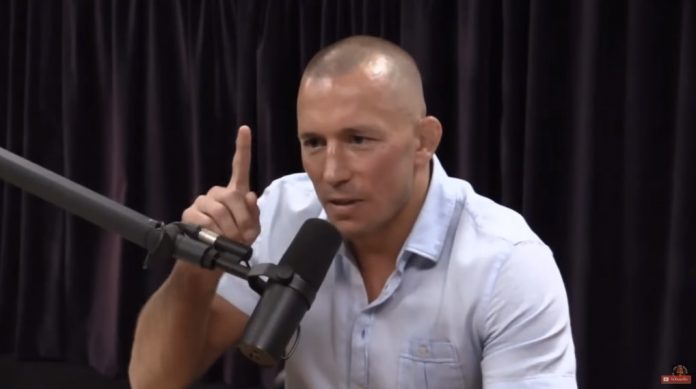 Gsp was bullied all the time when he was young. That’s probably the reason why he became what he became. Some time ago he met his bully on the streets and this is how it all went down.

GSP:
A few years ago I drove my car in the evening and I saw a tall guy coming to me begging for money. That was the guy that used to bully me in school. I said, wait a second till I park my car. I parked a car and went to talk to him.

I asked him, what the hell are you doing here man? He thought I will be angry and when he saw me he was scared. He thought I’m gonna “shoot” at him because I’m a world champion now and I can beat him easily. That wasn’t the case when we were younger as he was three years older and he was beating me in the bus.
He was really scared, he didn’t know if he should run or not. But I was cool, I asked him what are you doing here man?
He said like, things don’t go well for me. I told him, man, you’re a tall guy, you’re good looking there are many opportunities for you out there. You shouldn’t be here.
I gave him like some money that I had in my pocket, like $100 or so…
I told him, get out of here, you’re full of potential. When I was younger I wanted to be like you. You’re a tall guy, good looking.
After that, I shook his hand and he was all thankful saying thank you Georges and I didn’t hear anything about him for some time.

Few months after that I went to my father’s house for a dinner and my dad asked me If I know who came to the house a few days ago?

And it was that guy that bullied me. He told my father that he talked to me and that now he has a job and that I changed his life. He just wanted to say thanks to me.

Whatever he did to me was still there in my heart, it still hurt because he did very bad stuff to me when I was younger. But, when I saw him it made me feel good.

Listen and watch the rest of the interview on Joe Rogan podcast in a video below: