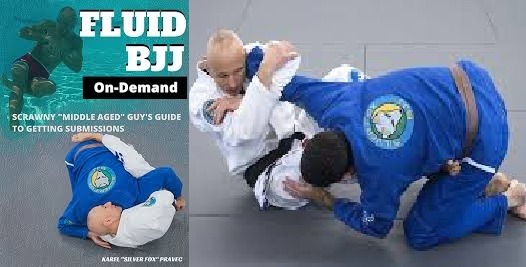 It seems that with the BJJ DVD instructional revolution well on its way, coaches keep coming out of the woodwork. Just about everyone and anyone hs a DVD out these days. That makes it great in terms of quantity but it does raise the question of quality. Remember how hardly anyone knew about Danaher some 5 years ago? Now people would kill for one of his instructionals. Remember that it is not the coaches’ exposure to the public that merits getting their DVD. Quite the contrary, it is the quality of their content. In those terms, yet another Renzo Gracie academy standout is Karel Pravec, and his Fluid BJJ DVD is simply a must for every grappler.

Karel Paravec is one of those guys that doesn’t really enjoy the spotlight. As it happens, in Jiu-Jitsu those are precisely the people you want to learn form. His Fluid BJJ DVD is a one-of-a-kind instructional that’ll really force you to re-think the fundamental principles behind your BJJ game. In those terms, this Jiu-Jitsu instructional won’t teach you new crazy stuff, but rather how to make sure you win while you’re rolling/competing. Finally, a DVD teaching what everyone wants to learn, right?

At this point in time, there’s nobody in the grappling community that wouldn’t want to train at Renzo Gracie’s headquarters in New York City. The “Blue Basement” as it is often referred, has been a real layer of elite level grapplers since it’s inception. In fact, there are so many people that share the Renzo Gracie / Danaher lineage, you’d be amazed at who some of them are. For example, did you know that Firas Zahabi is a Danaher black belt? How about Karel Pravec?

There’s something going on down in that basement that is not only breeding world champions but also world-class coaches as well. Moreover, it is astonishing how most of them value their privacy and try to stay out of the spotlight. In today’s world of trash-talking and peacocking, this is a true virtue. Moreover, there are not many DVDs from the people working down there in the blue basement. What comes out, though is usually pure gold. However, no matter who the coach is, hardly anything can measure up to the Fluid BJJ DVD. It is the ultimate submission blueprint to ensure you get everyone, from training partners to fierce rivals in tournaments. Moreover, you get the quality of coaching we all associate with Renzo’s academy, at just a tiny fraction of the usual price for classes or DVDs by other coaches.

Motion Before Power – Karel Pravec AKA “The Silver Fox”

Karel Pravec, AKA Silver Fox is a Brazilian Jiu-JItsu black belt under Renzo Gracie. The reason people call him the silver fox is that he has grey hair, and constantly outfoxes his much younger and stronger training partners. In other words, exactly the guy you want to learn BJJ from. In fact, Karel is one of the first students of the Gracies. He is also recognized as one of the premier coaches in the world, as proven by the likes of Erin Blanchfield, Sergio DeBari, Frank Roberts, Enrique Galarza and many of his other students.

In terms of competitive experience, Karel is a European Senior champion, as well as a master’s Grapplers Quest and Naga World champion. Moreover, he is a lightweight grappler, meaning you won’t find any power moves in his arsenal. Karel is huge fan of the submission game, and he has very original methods of getting to the highest-percentage submission holds in the sport.

After getting his black belt in 2006, Karel opened his Silver Fox academy in New Jersey, in response to popular demand. His take on jiu-jitsu is one of the deliberate and precise movements, that leads to submissions. He likes to rely on only two things – deception and techniques. To that extent, you’ll hardly find a better instructional than the Fluid BJJ DVD to become a true submission hunter.

The Fluid BJJ DVD by Karel Pravec is a multi-chapter instructional covering submission hunting. That said, instead of learning submission upon submission, you actually learn the most cunning setups and tactics to ensure you get a tap. To that extent, each chapter focuses on a different submission along with associated follow-ups.

The first chapter takes care of the guillotine choke, while the second covers everything you’ll ever need to know about Omoplatas. Even better, chapter three goes over Ude Gatame, or the straight arm lock and all possible follow-ups and variations. Chapter four will have everyone jumping with joy, as it offers submission from bottom side control. The penultimate fifth chapter covers some common patterns and ways to connect techniques. Finally, there’s a huge bonus chapter that covers different entries to the submissions covered earlier, both form standing and on the ground.

The Fluid BJJ DVD certainly begins with a bang, with Karel Pravec heading straight into guillotine chokes. Before the choke itself, Silver Fox goes over the applications of the guillotine from both standing and the bottom. Moreover, he covers the offensive aspects of hunting for guillotines.s Only then does he go into the choke details, which, I might say, are the most detailed I’ve ever seen.

In terms of follow-ups, Karel keeps things simple. He turns the guillotine into an Anaconda choke whenever he needs to. Moreover, he covers crazy Anaconda variations as well as ways of coming back toa guillotine. Some integral grip information rounds of chapter one of this instructional.

There’s one thing you need to know about Karel – he likes his submissions, but he loves armlocks. To that extent, he loves breaking arms in every fashion imaginable. Understandably, the OMoplata is a huge staple of his submission game. He likes to start with short armlocks and straight and inverted armlocks that will eventually lead him into Omoplatas. this is a submission game that ensures a tap before you even get where you want – the Omoplata.

The follow-ups come in the usual options – back take arm triangle, etc. However, there is also stuff that most people never think of, like the Mangledome (you’ll have to see it, to believe it) and even leg locks! Yeah, you’ll learn how to get toe holds from an original Omoplata setup that already contains several straight armlocks along the way.

Which gets us to the Ude Gatame. This is the Japenese term (original term) for the straight armlock. This is one of the fastest submissions in BJJ and one that Karel greatly favors. In fact, the has taken it to new heights in the Fluid BJJ DVD instructional. He starts off with the upside-down version, dissecting it into the tiniest details. Then, he moves on to follow-ups, which include triangles (regular and inverted) as well as a rolling armlock. Finally, he brings it full circle by introducing a guillotine opening off of a failed armlock.

The bottom side control is a positon many BJJ students, particularly white and blue belts really despise. Yes, this is uncomfortable to be in, but you do have options. In fact, as Karel proves in his instructional, you shouldn’t just think about escaping. Instead, you even opt to go for attacks of your own that end up in a tap. That way, you don’t need to spend energy escaping but rather get a tap.

The options here include armlocks (of course, it is a Karel Pravec DVD) as well as a bunch of other crazy submission options and even chains. There’s a chain consisting of a Kimura, Americana, Toe Hold and Sweep that will never fail you. The inverted triangle setup is also a real refreshment, as it starts off differently than the standard one. Finally, there’s a leg keylock which I can’t really explain and a kneebar to round it all off.

This is the chapter where Kerl doesn’t demonstrate any submissions. It is also the shortest chapter of the bunch, with just three sections. However, it also happens to be the most important part of the Fluid BJJ DVD set! In other words, everything you see before and after this section is never going to be effective unless you pay attention to the principles here. Speaking of principles, this chapter is divided into three scenarios. Each of them covers a different aspect of BJJ were you can apply a common principle. The first one is the windshield-wiper scenario, the second is the forward shoulder roll and the final one addresses underhooks. Believe me, when I say, this chapter of the DVD is a little blueprint to BJJ’s success on its own! 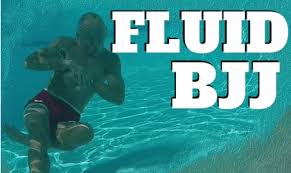 Finally, it is time for Karel Pravec to share with us everything he did not include above. And, when I say everything, I really mean EVERYTHING! This chapter has an incredible 25 different sections, covering stuff from guillotines, to armlocks, triangles and leg locks. To that extent, Karel shows how to attack from standing, from the bottom, from the top as well as how to integrate everything in your game. Moreover, he covers just about every position you might get into, and how to fight your way out of it via unstoppable submission holds. Oh, and there are also BJJ drills in here that you can do in the water. That’s as Fluid as BJJ can get!

What can I say fro this Karel Pravec instructional except that it changed my life! It impacted my BJJ game so much I really regretted not discovering Silver Fox before I was a purple belt. Still, the Fluid BJJ DVD is the number one companion to any submission hunter out there! And if you happen to be well past your thirties and a lightweight, this one is tailor-made for you! Enjoy!