The BJJ World has no shortage of big-name superstars. However, what is really fascinating is that even though the world is in the midst of a pandemic, new Jiu-Jitsu stars are emerging like there is nothing going on! To be honest, superstars of Gordon Ryan’s caliber are always fun to watch, but those hungry up and comers that are tearing opponents apart at the major professional grappling competitions scenes are the most exciting ones to watch if we are being honest! One such grappler is young Jessa Khan, representing the Academy Of Jiu-Jitsu academy.

Jessa Khan is a name that is quickly emerging as one of the next big female grappling superstars. Despite having her black belt for just a few months, and being barely 19, Jessa has some huge accomplishments under her belt. Moreover, she is extremely fun to watch, and not just because of the style that you would expect from someone that has been training with the Mendes brothers their whole life. She simply has a knack for submission grappling with and without the Gi, and there are huge things coming from this young competitor.

Who Is Jessa Khan?

Jess Khan is an American Brazilian Jiu-Jitsu black belt under the legendary Guilherme Mendes. Her full name is Jessamine Jada Khan and she was born into a military family, with her father being a Navy officer. that meant a lot of moving around as a child, which for Jess translated into a love for competitive spots.

Her pedigree before Jiu-Jitsu includes a bunch of athletic endeavors, including ballet, karate, tee-ball, and soccer. This is very impressive, considering that she was born in 2001. She liked karate a lot, starting it at the young age of 6. However, her dad’s job meant that at one point she ended up in Hawaii, where she had no option of training Karate. Instead, Jessa took up Jiu-Jitsu in 2010.

Training at the Onzuka Brothers’ O2 Martial Arts academy, Jessa Khan also started cross-training in wrestling and Judo, setting herself up to potentially become one of the greatest female grapplers of today. 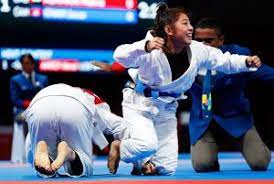 As mentioned, Jessa Khan began her BJJ training with the Onzuka brothers, starting off in their kids’ program. She got her yellow belt there but then had to move again. In fact, she trained at different gyms across the US as a kid, getting her next belt (orange) from Kevin Watson at KWBJJ in New Hampshire. Her next belt (green) came in Virginia from Gustavo Machado. By that time, she already had her sights set on becoming a full-time professional BJJ competitor.

With goals like that, ending up in an academy of the AOJ caliber was really a no-brainer. Jessa settled with the Mendes brothers in California as a green belt and has stayed with them ever since. Given her dedication, style, and obvious talent, it didn’t take long for Jessa to establish herself as one of the best up-and-comers in the academy. Given the number and quality of top competitors in the AOJ that is no easy feat by any stretch of the imagination.

Jessa got all her adult belts, from blue to black from the Mendes brothers. She received her black belt at the age of 18 from Guilherme Mendes in October of 2020, just a couple of days before her 19th birthday.

Jessa Khan is a Mendes brothers black belt which says a lot about her inclinations. Namely, as you would expect, Jessa is a formidable guard player, with the open guard being her position of choice. She is comfortable in pretty much any variation of the guard, including closed guard, but her go-to positions are the De La Riva and 50/50 guard. Grip-wise, when competing with the Gi, collar and sleeve variations seem to be Khan’s bread and butter. Of course, the Berimbolo is also a big part of her attacking bottom game.

If I had to describe Jessa’s style in a signal sentence I’d say that she is an aggressive bottom player with a keen eye for the finish. The guard game is a given with her pedigree, so much so, that we’ve seen her even allow takedowns against her in competitions in order to establish her game, and hunt for submissions.

In the submissions department, Jess Khan does virtually everything. While her mentors are mostly known for upper body finishes, Jessa’s attacks include a wide variety of leg locks as well, including kneebars, toe holds, and heel hooks. She has quite a lot of triangle finishes as well as a host of straight armbar submissions.

The one thing that is highly impressive about Jessa is that she has patience that younger athletes rarely display, especially in combat sports. She does not seem to rush anything and especially calm and collected when on the defense. Subsequently, she is notoriously hard to submit and can work a very effective counter-attacking game, which she does.

As a purple and brown belt, Jessa Khan has some huge accomplishments. On the open tournament scene, she has gold medals in the Europeans, Pans, and the Worlds as a purple belt, and European gold as a brown belt as well. That is without counting all her juvenile accomplishments. After all, she is active in competition for the better part of a decade.

She also has so major accomplishments on the professional grappling scene, at tournaments like Who is Number One and Fight to Win. She has beaten some big names in the grappling circuit so far, like beating Vicky Hong in Fight To Win, and most recently won her black belt debut at Who is Number One against the established Danielle Kelly.

Jessa Khan also has a very impressive result at the 2018 Asia Games in traditional Jiu-Jitsu. She represented Cambodia (she is the daughter of a Mexican American mother with Cambodian American father). That medal was Cambodia’s second-ever gold medal in the Asian Games.

What’s Next For The BJJ Prodigy?

Jess Khan competes at rooster weight, which places her in a very interesting division that features the likes of Mayassa Bastos and Serena Gabrielli, to mention just a few. Currently, Jess Khan is scheduled to face Thamires Aquino this weekend (April 3rd, 2021) in a superfight under the Evolve UR Game banner.

Jess Khan already made history as the youngest ever AOJ member to receive her black belt. She is also making all the right moves on the big stage as well, already going 1-0 as a black belt, and with a very impressive record of 14-1 as a brown belt. There is definitely a lot to come from young Jessa Khan, so make sure you follow her online and keep an eye out for her performance this weekend!