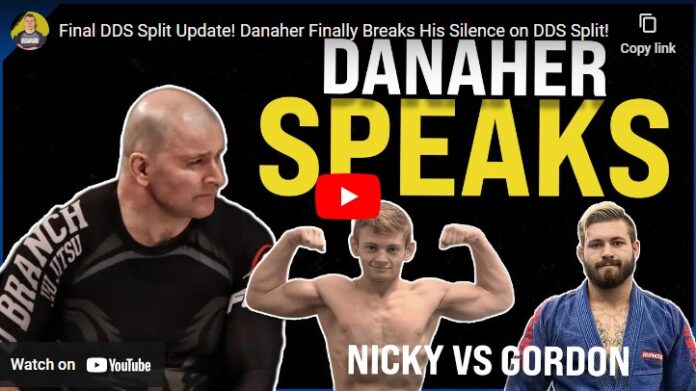 John Danaher finally revealed the truth about the much speculated DDS breakup which happened last year, and pinpointed family tensions between Gordon Ryan and Nicky Ryan as the catalyst for the break up that gave birth to two high-level grappling teams: New Wave Jiu-Jitsu and the B-Team.

Danaher Reveals The Truth On The DDS Breakup

John Danaher’s podcasts are always fun, but whenever he is on Lex Freidman, he drops bombs. In the latest Friedman-Danaher conversation, which lasted four and a half hours, Lex managed to pry out of Danaher the truth about the DDS breakup, with lots of previously unknown details.

While the BJJ world speculated that there was a falling out between team members, nobody really thought the Ryan brothers were the main reason behind the split.

The DDS famously abandoned New York City and the legendary blue basement at Renzo Gracie’s during the pandemic for the warm and Covid restriction-free environment of Puerto Rico. ADCC’s Mo Jassim set them up with a gym and a house to live in.

Back then the team featured the who-is-who of the best No-Gi grapplers in existence. Gordon and Nicky Ryan, Nicky Rodriguez, Ethan Crelnistein, Craig Jones, etc.

The Team didn’t manage to stay together long, and Danaher pinpoints the main drama to be a family feud between Nicky and Gordon Ryan.

As he put it, the tension turned into a tragedy, given that it was not just a training room feud but rather a family one.

The moment Ryans’s drama started to affect training and started spreading to the other members of the DDS, John decided to take action.

John’s attempt at keeping the peace was to try and get the brother to bury the hatchet until after the ADCC, with the idea of them all performing under the DDS banner.

However, tensions seemed to boil over way before that, eventually making it unbearable for the team to live and train in Puerto Rico, which prompted the move to Austin, which only seemed to drive a bigger rift between the two teams that emerged from the DDS breakup.

As per Danaher, the New Wave portion of the squad, which was essentially John and Gordon, with a few of the junior members, were supposed to train at the gym that the B-team now has upon their move to Austin, Texas.

The two teams moved to the same city, but it was B-team that managed to overthrow Danaher and Gordon Ryan in the race to get to the best gym space in town which, most likely, only raised tensions even more between the two camps.

With the move to Austin, Texas, we got two ultra-high-level American grappling teams: New Wave Jiu-Jitsu and the B-Team.

The B-team obviously had a bunch of “killers” already, with their impressive roster expanded further with up-and-compers like Jay Rodriguez and Robert Degele.

Danaher, meanwhile, did not waste any time himself adding to the newly formed New Wave Jiu-Jitsu squad, as we saw at the 2022 ADCC, with the likes of Giancarlo Bodoni and Nicolas Meragali strengthening the squad.

The head-to-head meetings at the ADCC went both ways, with Craig beating Meragali, and Gordon easily submitting Nicky Rodriguez.

While we are bound to witness many more battles between the two, the question still remains of what would have a super squad been able to achieve had the DDS breakup never taken place.