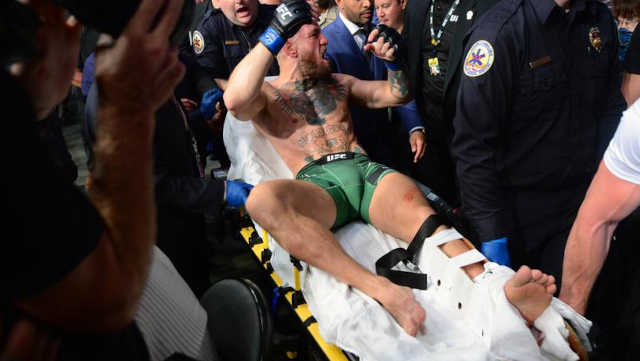 Dustin Poirier defeated Conor McGregor in a big spectacle at UFC 264 in front of more than 20,000 people in Las Vegas

The fight lasted one round which was fantastic. Elbows and fists flew, there was fighting on the ground floor.

But about ten seconds before the end of the round McGregor stopped awkwardly and sprained his ankle, and the first information says that the ankle was broken. The match was stopped, and the Irishman suffered great pain.

The fight in the hall in Las Vegas was watched by 20,000 spectators, and among them was former US President Donald Trump.

Dustin Poirier is convinced that Conor McGregor’s injury is his fault, not the Irishman’s bad luck.

Dustin Poirier was very pleased after winning his third fight against Conor McGregor, also the main fight of the UFC 264 event. All this despite the fact that the end of the fight actually came because of an injury, not because of some direct blow from him. The reason for this is his opinion that there were no unfortunate circumstances here after all, but that the reason for Conor’s injury lies in what he did himself during the fight.

He actually discovered this right away in an interview after the fight, which Joe Rogan did with him. It was Rogan who mentioned that he looked like Conor had made a wrong leg movement when he missed a hook at the very end of the round. Dustin disagreed.

“There was a fracture when one blocked his kick at the start of the fight. He didn’t injure his leg when he tried that shot at the end. When I pointed at him, in the early moments of the fight, it was because I felt like I blocked his shot well,” he said.

Dustin, while Conor not far from him, sitting on the floor of the Octagon, protested loudly. And indeed, if you look at the fight again you will see the scene after about half a minute. Dustin blocked the shot, then pointed to Conor and said something.

The Irishman thus actually continued with the trash talc that marked this week. However, unlike in 2014, when he managed to get Dustin into his head, which resulted in him entering the fight mentally shaken at the start, this time there was no such effect. Poirier remained focused and actually became even more motivated. Conor has repeatedly said he intends to kill him, which is not easy to remain indifferent to.

“I don’t have a problem with trash talk, but murder is something you don’t have to throw around. After that, there’s no going back. He said he was going to kill me, but that’s not being said. “, he replied oppositely.

He turned briefly to the beginning of the fight. The Irishman opened up better again, but after firing a few of his strong weapons he still failed to reverse the direction of the fight more seriously.

“He hit me with a good kick like in the last fight. With a kick, I didn’t see. He shook me, but my legs were still there. After that, there was a crash. He put his fingers in my gloves and pulled me down to hit me with kicks. I tried to point this out to Herb. This guy is actually dirty trash,” he ended up with not-so-nice words for his opponent, still addressing the audience who roared throughout the interview:

“And everyone who resents is followed by a message. You can kiss my ass!”

Dustin now literally has a chance to pick his next step, but it looks like he will be attacking the UFC title for the second time in his career in mid-autumn. That actually makes the most sense.

Khabib Comments Poirier’s Triumph With a Significant and Powerful Message