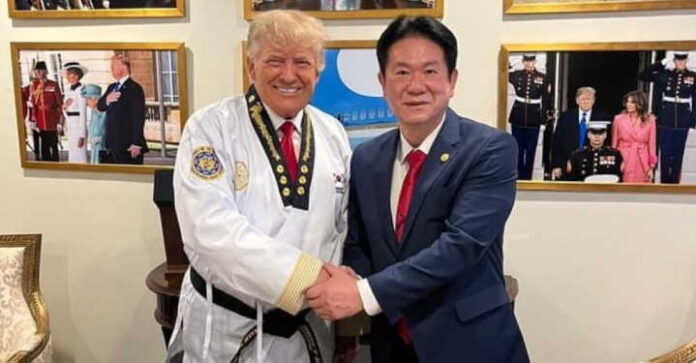 According to this, the former American president could be one of the greatest martial authorities.

The 75-year-old former US President Donald Trump owns one of the most valuable belts in taekwondo martial art. Although he had never practiced the sport, the president of the Kukkiwon taekwondo organization, Lee Dong-sup, decided to award him an honorary belt, as mentioned above. But the problem is on that 9th day, which is really only awarded to those who have achieved the most or have helped the sport a lot. Trump is not one, after which many criticisms of the move have emerged.

The mentioned president of the organization stated that he himself is proud to have had the opportunity to award the belt and that the move has absolutely no political connotations. Trump accepted it with pleasure and said he would like to see a presentation of a skill he had recently become a master of. In short, he didn’t check that segment either. But photography has fallen and Kukkiwon is mentioned. Who knows, maybe that was the main ambition.

This belt was also given to Vladimir Putin in 2013, so we can hardly accept the latter. Especially since he has never played that sport either.

The skill that is the pride of South Korea was practiced by many famous “practitioners” of martial arts, such as Chuck Norris, who reached the 8th day. Norris is the only man in history to wear black belts from at least one martial art within each of the four groups (kicking, punching, grappling, throwing). But Trump and Putin have surpassed him in this one. Who knows, they might take his position in-jokes as well.