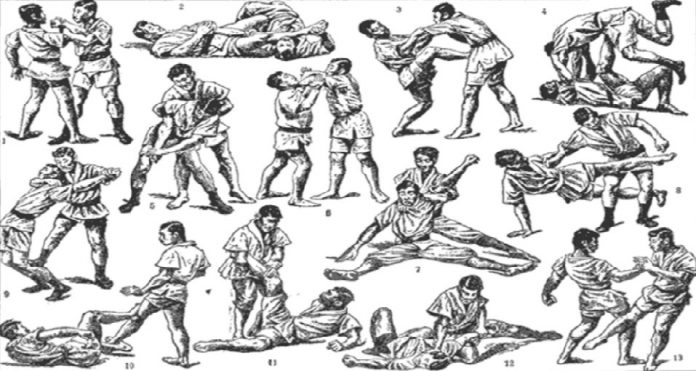 We all know that Brazilian Jiu-Jitsu is a result of Japanese grappling martial arts. In particular, it was Judo that inspired the Gracie family to create and perfect Jiu-JItsu. However, the traditional elements of Judo mean that the art behind BJJ still exists to this day. Not only that, but the original grappling art, the one behind all grappling martial art styles is still in the picture as well. We’re talking, of course, about Japanese Jiu-Jitsu.

Japanese Jiu-Jitsu is the mother of all grappling arts. It is as simple as that. Originally, it started off as a lethal system to keep the samurai alive in unarmed combat. Today, Japanese Jiu-Jitsu, in most gyms, is in a traditional form of martial arts practice. Although one different from the military version. This traditional style of Jiu-Jitsu is again in the public’s focus, thanks to the explosive spread of Brazilian Jiu-Jitsu. However, the two arts are quite different in some key structural points. Let’s take a look at the main differences between the two.

The precise origins of Japanese Jiu-Jitsu are quite unclear. Speculation points to the Buddhist monks in India, as the first to develop the art centuries ago. What’s known is that it was used as a survival tool for the Japanese Samurai and Ninja warriors. The idea was that in unarmed combat, striking would be completely ineffective because of the warriors’ armor. In such cases, grappling methods that involved throws and joint locks proved to be a superior method of combat.

Japanese Jiu-Jitsu has come a long way from its original military form. The traditional values of the art have survived as the knowledge of the art was passed from generation to generation. As time went by, the art developed into a more sport-friendly format, despite it being the art of choice for military and law-enforcement personnel to this day.

A major change in traditional Japanese Jiu-Jitsu was the introduction of Randori or free sparring. It took the creation of Judo by Dr. Jigoro Kano to introduce this change in the art. As such, Judo later pulled apart from Jiu-Jitsu as a separate grappling martial art. Judo, though, specializes mostly in the throws department, while traditional Jiu-Jitsu is still a very diverse martial art with plenty of elements. 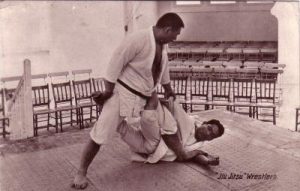 Brazilian Jiu-Jitsu is a third generation offspring of Japanese Jiu-Jitsu. It came into existence thanks to the influence of Judo. Mitsuyo Maeda was the person responsible for introducing Carlos Gracie Sr. to the art of Judo. Both Carlos Gracie and his brother, Helio were, not the most impressive physical specimens. This was particularly the case of Helio Gracie, who was frail and weak, to begin with. This prompted the Brazilian to focus on the ground aspects of fighting, thus reverting back to the Japanese Jiu-Jitsu roots of Judo.

Today, BJJ is by far the most prevalent grappling art in the world. It was the base for the inception and rise of MMA after Royce Gracie destroyed everyone. Since then, even BJJ itself has evolved substantially from the original version created by the Gracies. So, you could even say that MMA is the result of Japanese Jiu-Jitsu as well, thanks to the influence of Judo and BJJ.

Opposed to Judo, which went the way of throws and sweeps, BJJ’s area of specialization is the ground. Reverting to many of the most basic traditional Jiu-Jitsu principles of control, BJJ is built around a system of dominant pinning positions. The ultimate goal of Brazilian Jiu-Jitsu is to finish an opponent via a choke or joint-lock, which can be traced back to the original days of Japanese Jiu-Jitsu.

Another important aspect is the culture that gave birth to the art. Brazilians are less traditional and more relaxed than the Japanese. This is reflected in the art where training and communication is a lot less formal than Judo or Jiu-Jitsu.

Now that we know the history of the grappling martial arts of the Jiu-Jitsu line, let’s take a look at how they differ in modern times. Both BJJ and Japanese Jiu-Jitsu are today competitive sports, ranging across different disciplines.

To begin with, modern BJJ is a much more sports-oriented martial art. Not to take anything from its effectiveness, but the sports aspect has taken away most of the self-defense aspects of the art. Today, BJJ’s focus is in a sports direction, with points and rules guiding the choice of techniques.

Furthermore, BJJ specializes almost exclusively in the ground fighting aspect of grappling. On the ground, it offers complete control over an untrained opponent, regardless of size. Actually, it is more geared towards giving smaller people the upper hand over bigger opponents. The fact that the fight takes place on the ground means that there is less left to chance. Whnenonn the ground, control is easier to obtain and is much more stable. On the negative side of things, BJJ takes more time to elicit complete control over someone. Many people think that in a self-defense context, Brazilian Jiu-Jitsu is useless against multiple opponents, especially armed ones. But, to prove that BJJ makes sense in those types of situations here is an article explaining it. 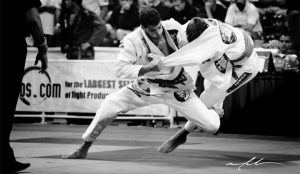 Today’s Japanese Jiu-Jitsu still has a lot of the traditional elements held in high regard. It is much stricter discipline-wise. However, it does incorporate many different disciplines from striking to practicing throws and locks that are considered dangerous. It is faster in terms of defeating an opponent and is more self-defense oriented. Nonetheless, it is not as effective against a stronger, bigger opponent in a real situation.

To wrap it up, BJJ is undisputed in the ground aspect of fighting. Japanese Jiu-Jitsu, on the other hand, offers more diverse knowledge that is not as in-depth and details as that of BJJ.

Jiu-Jitsu Gi Origins: From The Samurai To The Gracies