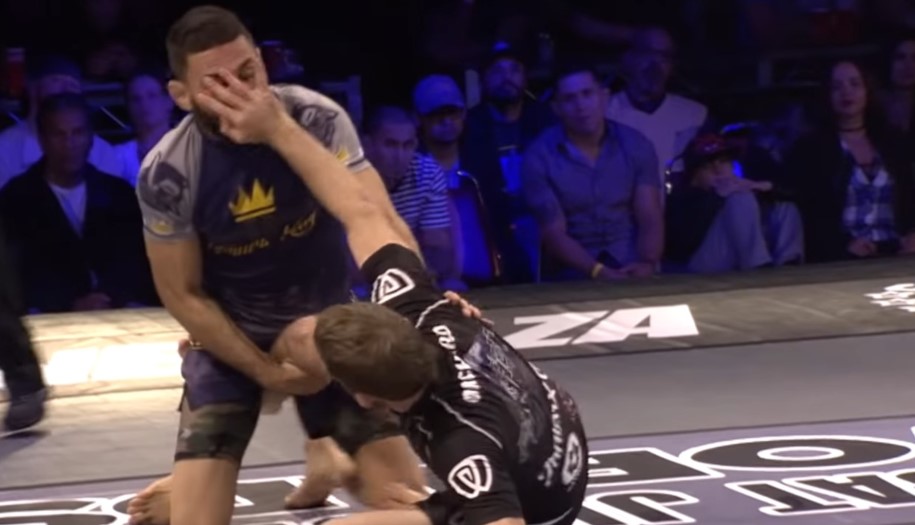 Combat Jiu-Jitsu (CJJ) brought some new competition rules into the world of grappling highly connected with Brazilian Jiu-Jitsu. In this article, we’re going to go through some main aspects of CJJ including creator, events, athletes, and more.

What is Combat Jiu-Jitsu?

From a spectator’s point of view, it appears to be “Jiu-Jitsu with slaps on the ground”, in some ways similar to the Japanese hybrid wrestling promotion of Pancrase, due to these gloveless open-hand strikes being allowed. Unlike Pancrase, CJJ does not allow striking from standing, or competitors to wear speedos and wrestling boots.

Combat Jiu-Jitsu was born out of 10th Planet legend Eddie Bravo’s belief that sport BJJ was moving away from the intended purpose of martial art. He felt that “sport Jiu-Jitsu” was beginning to get clustered with unrealistic moves and stalling unlikely to be beneficial to an actual real-life altercation and decided going back to the basics tenants of self-defense would make things closer to Maeda’s original vision.

Competitive Combat Jiu-Jitsu and the future

Eddie Bravo has been running competitive CJJ matches since his eleventh invitational (EB11). Nick Honstein, Sheridan Moran, Chad George, and JM Holland all acted as guinea pigs, competing for the bantamweight (135 lbs) title. These three matches were considered the most exciting of the night, drawing attention on Twitter from both BJJ and MMA big names. The audience had a lot of fun, often drawing laughter from onlookers as the sound of slaps was made.

Due to this making the sport get compared to Eastern European slapping contests, this laughter though is something that may not draw the right attention for long-term growth. This has not stopped Eddie Bravo from moving away from his normal invitational events in favor of Combat Jiu-Jitsu Worlds events.

These events are increasing curiosity in the sport and it’s likely to see more BJJ practitioners flock to it. Having Bravo as its progenitor and biggest proponent of the sport though can be seen as a double-edged sword. Known for his “out there” conspiracy theories, Eddie is certainly not without his charm, but his whacky beliefs tend to paint him as an eccentric which more serious competitors may avoid. He has, however, kindly put up many of the matches including Combat Jiu-Jitsu Worlds 1 (2018) in a video below.

Check also: Is Combat Jiu-Jitsu Going to Stick around?

Effectiveness of Combat Jiu-Jitsu in a street fight scenario

It is obviously preferable to either avoid a fight or escape to safety, unfortunately, this is not always possible. While the footwork of various striking arts might benefit someone posed with multiple attackers due to the fact that going to the ground with one assailant might leave you open to stomps and kicks of their accomplices, in a one-on-one scenario, Brazilian Jiu-Jitsu is famed for its self-defense effectiveness. Being able to grapple with someone typically disables their ability to throw strikes, which can be absolutely devastating.

A common tragedy in any society today is that lives are lost as a result of wild punches. Someone who is knocked to the ground may land on their head wrong, leading to brain damage, or even a blood clot. Whether this punch was thrown as an attack, or in self-defense doesn’t detract from death being a typically needless tragedy.

Ideally, a trained grappler can often defend themselves from being struck, or from a lifetime of legal trouble and guilt which may result in an unintended manslaughter scenario.
In addition to the benefits of standing grapple, knowing even basic grappling puts the combatant in an incredibly advantageous position over the average man on the street.

For this reason, Brazilian Jiu-Jitsu is famed for giving a smaller, out-of-shape practitioner a big advantage over a larger, more athletic one. Particularly as, whether intended or not, a large proportion of fights end up on the ground. Despite these advantages, the average “sport jiu-jitsu” practitioner may not be prepared to handle certain problems which may come out of a grappling scenario on the street, however.

As Mike Tyson famously said, “Everyone has a plan until they get punched in the face”.

While CJJ doesn’t allow either standing or closed fist strikes, it still requires the practitioner to become accustomed to the feeling of being struck in the face while attempting to outstrike or submit their opponent.

Additionally, certain high-risk high reward guard pulling or guard passing moves seen in competition BJJ which may put the user in danger of being struck in a real-life scenario are typically avoided in CJJJ. Indeed, CJJJ is in many ways closer to the old-school style of Gracie Jiu-Jitsu seen in videos of martial artists taking on the “Gracie challenge”, or like Royce Gracie’s early UFC dominance.

Is combat Jiu-Jitsu more effective on the streets than sport Jiu-Jitsu?

While both CJJJ and BJJ are pretty dominant marts arts in the streets in one on one scenario, CJJ has its advantages there. In CJJ you’re more focused on getting yourself safe from being slapped, which increases your overall awareness of being punched or even kicked, we can say that CJJ is more effective in street fight scenarios than BJJ.

As previously mentioned, on the street, striking-based arts like boxing, Muay Thai or Krav Maga may be more effective than Brazilian Jiu-Jitsu at handling multiple attackers. This is more about buying time for help to arrive, utilizing space, or providing an escape, rather than being able to disable or knock out the attackers. That being said, getting into a street fight is usually avoidable and the chances are low.

Multiple attackers is again an unlikely worst-case scenario. If there is only one assailant though, it is difficult to find a more effective martial art than CJJ. This largely extends to MMA as well.

A fully rounded fighter with great striking and takedown defense will always provide a significant threat to a Brazilian Jiu-Jitsu specialist of any variety. While many schools will teach their students to use head movement, feints, and evasive movement to dodge or absorb strikes thrown at them before they shoot for a takedown or throw, MMA has shown that a striker with great footwork or high-level counter grappling can be a challenge to a Brazilian Jiu-Jitsu user.

Wrestling, for example, or similarly leveled Jiu-Jitsu practitioner, coupled with boxing or Muay Thai will put a fighter in good stead if his opponent is unprepared for this. Almost all current champions in the UFC have had a significant level of BJJ training, showing that it is still as an important part of a competitor’s arsenal as it was back in the Royce Gracie days.

Does combat jiu-jitsu ruin your body?

At this moment in time, CJJ is too new to see if it greatly increases damage to your body compared to its open-palm strikes-free counterpart. Theoretically strikes to the face, even open-hand ones will make nose bleeds, perforated eardrums, and black eyes somewhat more likely.

Knockouts are an acceptable method of victory in a CJJ match, so this can lead to concussion and brain damage. Time will tell if this is a genuine concern or a minor risk. Compared to full contact MMA sparring, however, the risks of damage in CJJ are almost certainly diminished.

More about Jiu-Jitsu and how it affects your body

Jiu-jitsu is known as the “gentle art” as again, compared to striking martial arts it typically does much less damage to the brain. However, no intensive physical activity is without its risk of injury and all full-contact martial arts have an increased number of these.

Standing grappling and throws can have a heavy impact on the hips, back, and knees, while increased pressure from uncomfortable angles on joints can result in muscle wear and tear, ligament, or tendon damage.

There are a ton of ways to reduce the chances of injury, typically common sense orientated – submissions should be applied slowly, the intensity of sparring should be monitored and emotions should be kept in check, but any long term practitioner will tell you that they have picked up a few “niggling” injuries along the way, whether they’re a knee that clicks on the odd step, or fingers which aren’t quite as dexterous as they were from gi grips. That being said – there are many practitioners of the art in their seventies and even eighties.

Combat Jiu-Jitsu: Is It Really Going To Stick Around?