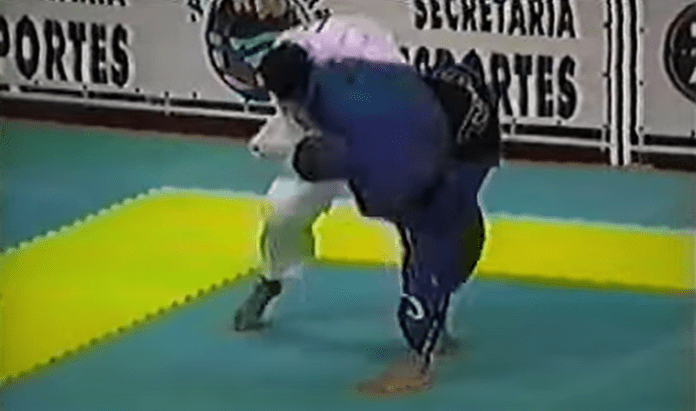 As BJJ is a very complex and probably the most complex martial art so it’s not unusual that Brazilian Jiu-Jitsu coaches and professors learn a lot from their students. In the case of this sweep that Leo Vieira managed to do in competition, he learned it from a kid in a kid’s class.

Once you see Cobra Kai sweep you’ll be pretty surprised how off-basing yourself with raising one leg high hooking the opponent’s arm can produce a great takedown leading you directly to the mount or side control.

Riccardo Ammendolia explains the story of this video.

“I saw Leo Vieira’s clip doing this technique in one of Marc Laimon’s remix tapes and it was unknown to me what he’s doing. So, I attended the seminar in Atlanta Georgia at the alliance academy and scored a private lesson with Leo Vieira, and asked him what’s going on in this move.

As he explains in the video this was a lasso sweep he learned from one of the kids in his kids class. This Lasso Guard sweep is modified to hook the opposite leg. As Leo said, he really likes this move and is using it in his training.

So, in this BJJ match, Leo took the risk and tried this lasso sweep while knowing that his opponent would “SWEEP THE LEG” out which he would be standing o and at the same time would give him momentum to sweep him.

Recently I told to Leo Vieira that people call this sweep Cobra Kai sweep and he liked it.”